21/01/2022 - All appears well.
If anyone sees a problem please email me at brickmarks@gmail.com Thank you.

The humble brick and its place in Scottish history

The humble brick is much underrated, underappreciated, undervalued and overlooked. 'Brick' is a generic term and with regards this project it stands for any clay related products manufactured at a Brick and Tile Works - bricks, drainage tiles, sewage pipes, animal feed troughs etc etc etc.

Stand up and be proud - I LOVE MY BRICK!

Father Jack knows the truth of it - Click here. 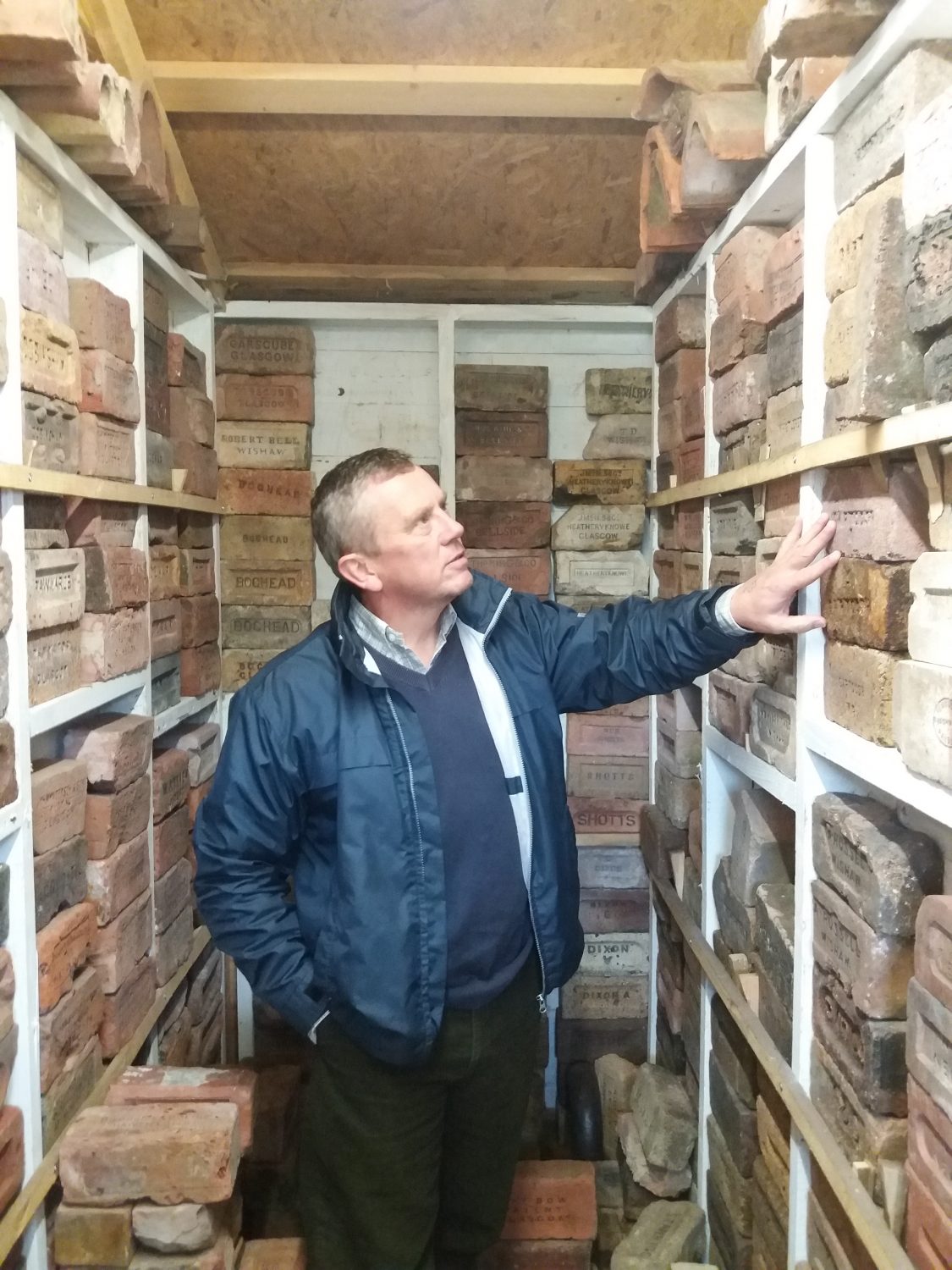 If anyone knows the whereabouts of a Drongan marked brick, I would love to hear from them.

I believe they were manufactured at the Drongan Castle Colliery, Drongan, Ayrshire.

Information is requested on the Blackpots Brick and Tile works, Whitehills, Banff.

I have a roof tile marked Blackpots but as yet a similarly marked brick evades me. Any information on to the whereabouts of such a brick will be gratefully received. Finding such a brick would be a fantastic boost to my Scottish brick collection. 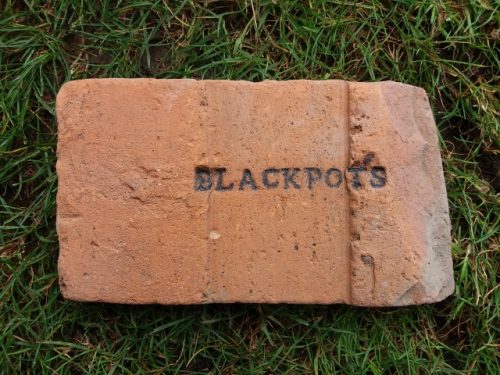 I would also love to hear from anyone that has information on the Blackpots works. Did your relatives work there? Do you have any photographs or headed notepaper bearing the Blackpots name?

Information of any description is requested with regards the Kilchattan Brickworks, Kilchattan, Bute. I believe the brickworks may have been on the grounds of Mount Stuart House and I am keen to ascertain if any marked bricks have ever been found by anyone on the island or further afield. I am currently researching these works for a forthcoming article on my site. 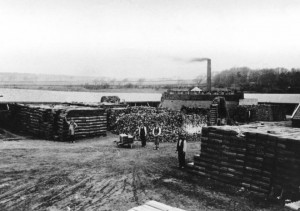 Please click on the following link to see the article with the information gleaned so far. Click here.

Information of any description is requested with regards the Terregles brick and tile works, Terregles near Dumfries. In particular, I would be interested in knowing if anyone has a marked brick or tile from the works.

From an entry on Scotlandplaces and an old OS map, the works were certainly in operation between 1848 and 1850 when they were owned by M.C Maxwell Esq of Terregles.

I am currently researching these works but the information is scant.

Please click on the following link to see the article with the information gleaned so far.

I am seeking an example of a "John McKnight & Son PLAN Kilmarnock" brick.

Anyone with any information on these brickworks or indeed with knowledge where I may pick an intact brick up for the collection, can contact me via the contact form on this site or directly by email to brickmarks@gmail.com 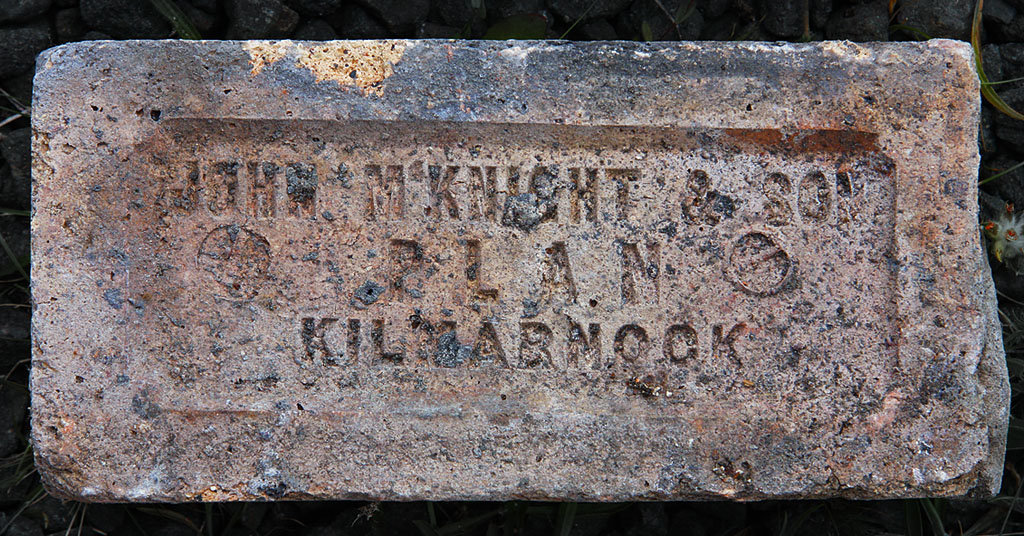 Any information on these works would be greatly appreciated.

Tanya is an artist working predominantly with clay but she also enjoys drawing bricks in all their glory. Bricks are beautiful. Bricks are solid and robust, but also very feminine, graceful, sophisticated and cool. 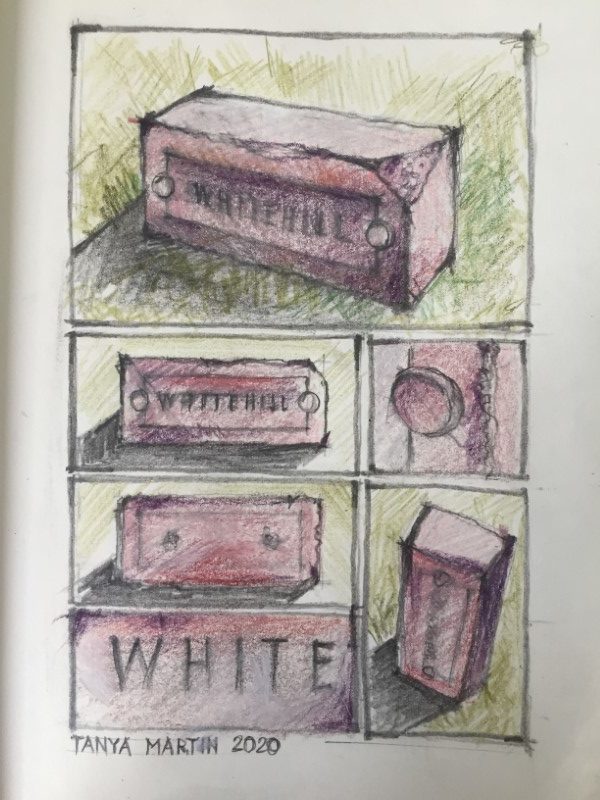 George Turnbull Company operated various brickworks including Dykehead fire clay works, and the Bonnymuir Brick and Tile Works, Bonnybridge, Falkirk. A firebrick stamped "G Turnbull C Dykehead 3/4" was seen at the Cruden Bay Brickworks, Aberdeen in 1982 and a rubbing was taken of the brickmark. This proves that Turnbull did mark his bricks. I would be interested in knowing if anyone can direct me to where I can find an example of the stamped brick as shown below or indeed any brick marked "Bonnymuir" Click here. and Click here. 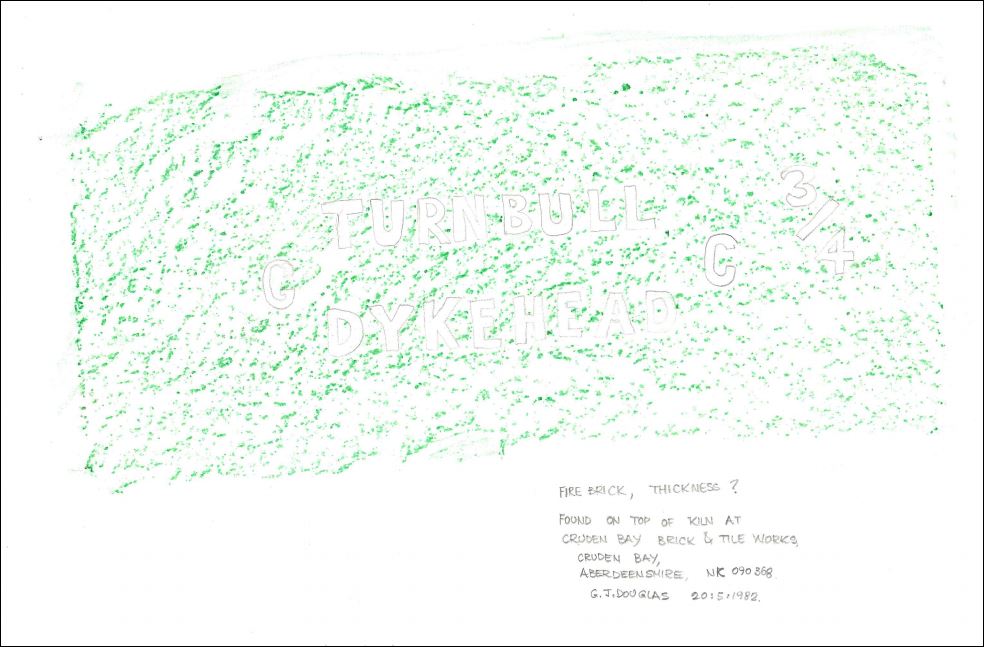 Information of any description is requested with regards the Edmonstone Brickworks, Millerhill, Edinburgh, possibly also known as the Wellington Brick and Tile Works or the Millerhill Fire Brick Works. In particular, I would be interested in knowing if anyone can direct me to where I can find an example of the stamped brick as shown below. I am aware of only 1 such brick being in existence and it is owned by a farmer local to the old works. 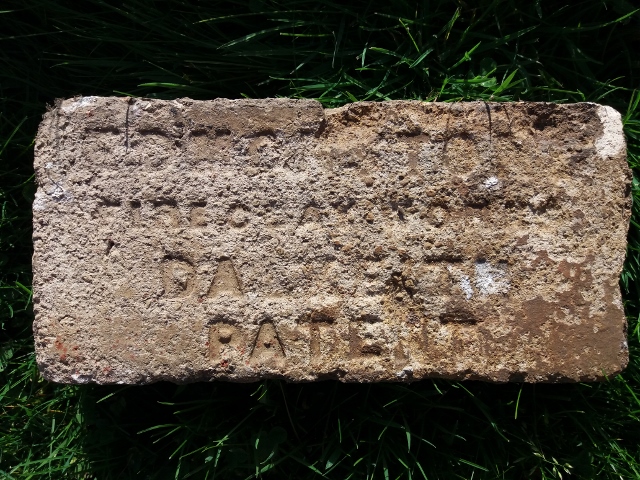 Please click on the following link to see the article with the information gleaned so far. Click here.

I believe these Greenhill bricks were manufactured at the Greenhill Fireclay Works, Bonnybridge.

The works appear to have started c. 1860 when Alexander and John Scott owned the farm and brickworks at Clayknowes, Bonnybridge.

The bricks were all found in the vicinity of the Greenhill Fireclay Works, Bonnybridge, Scotland. Letters are missing, reversed, upside down and angled. The one thing to note is that the letters are in the correct order as such albeit some are missing. They are all fire bricks. The 'Greenhills' bottom left appear to be a later version and the 'G' appears out of character from the other letters but at least it says, Greenhill! There are other stamps available from the same works with either a smaller font or later machine stamped versions but the names are complete on those.

My own thoughts are that this was a brickworks on its last legs prior to being taken over by the Clayknowes brickworks. As such the moulds appear to have been falling to bits especially the stamp in the bottom. They probably could not afford a mould maker or joiner so the moulder probably had to repair the stamp every morning and try to get the letters to stay in place. Perhaps they were split and could not take a nail to secure them. He appears to know how Greenhill is spelt as no letters are out of order. Basically, I think the moulds were in such a bad state that the moulder was happy if he managed to rig the stamp to say resemble anything that looked like Greenhill. 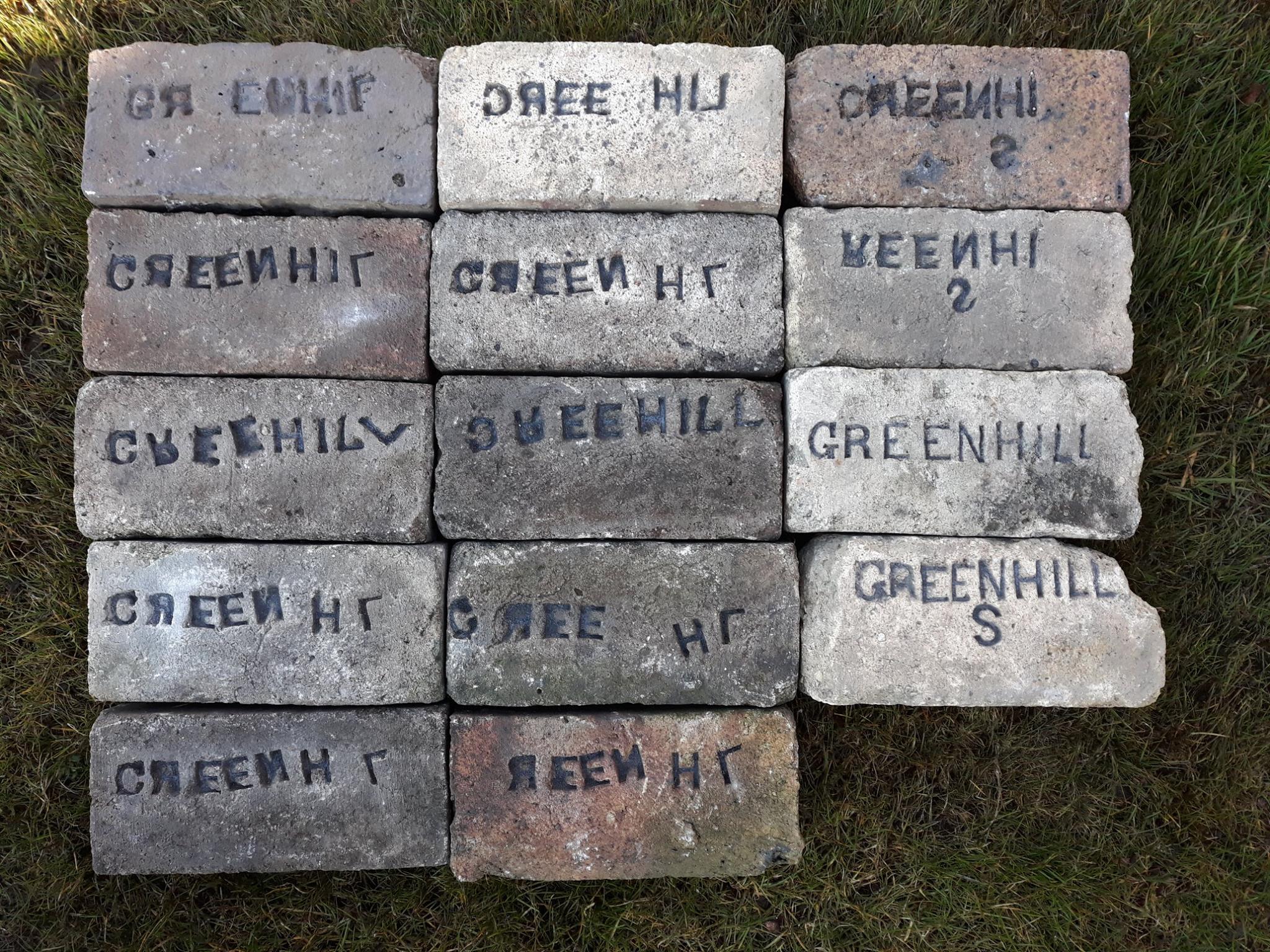 There are many many bricks still to trace and rescue. I am looking for all brickmarks and variations that I do not currently possess however the following 2 are being highlighted as 'most wanted' a 'Pinkie, Musselbro' brick from East Lothian and a 'Peter Weir Patent Glasgow' brick from the Glasgow area. If you find any brickmark I do not have then I will do my utmost to uplift personally or arrange postal delivery. Many thanks for your assistance and efforts to save a little piece of Scottish history. 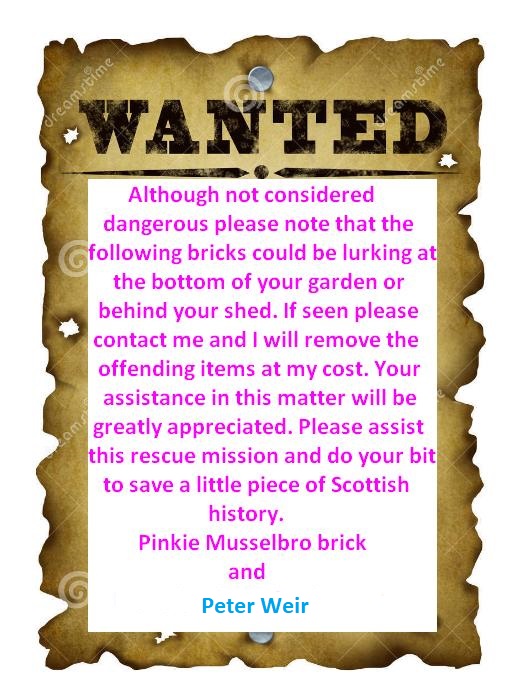 Apart from bricks themselves I am keen to save and collate all relevant and associated memorabilia connected with the Scottish brick making industry. If you are cleaning up, down sizing etc and come across any leaflets, books, catalogues, adverts, old issues of the British Clayworkers Magazine etc, on the subject of bricks then please consider me as an alternative home for them - please do not throw them out. I will consider taking anything relevant. These items will be preserved and hopefully one day become part of a National brick related database.

Any information as to where to find any bricks manufactured in the Aberdeen area would be gratefully appreciated. I have several bricks marked 'Seaton' and 'Torry' but there will be many more out there, even if they are variations on a theme eg Seaton 5, Seaton 20

In particular, I would love to hear from anyone that has a brick or drainage tile marked Clayhills, Aberdeen. 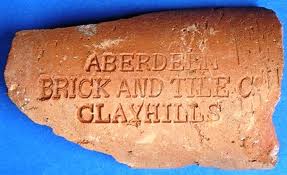 I would love to hear from anyone who may have a spare Auchinlee brick from near Motherwell or a spare Crail brick from Crail in Fife.

Both examples are currently AWOL from this Scottish National brick collection. Any information on these bricks will be gratefully received. 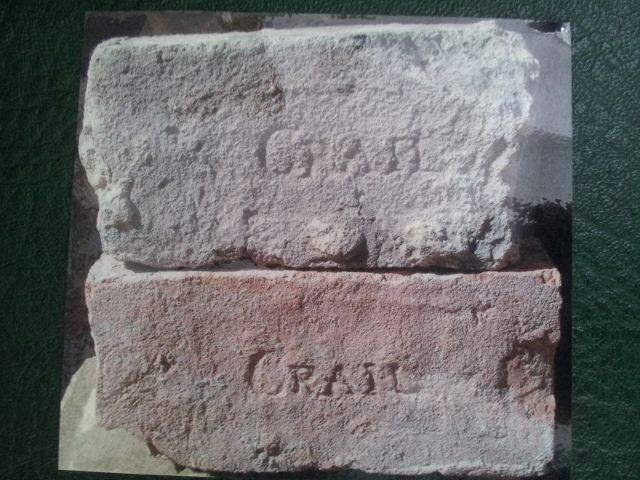 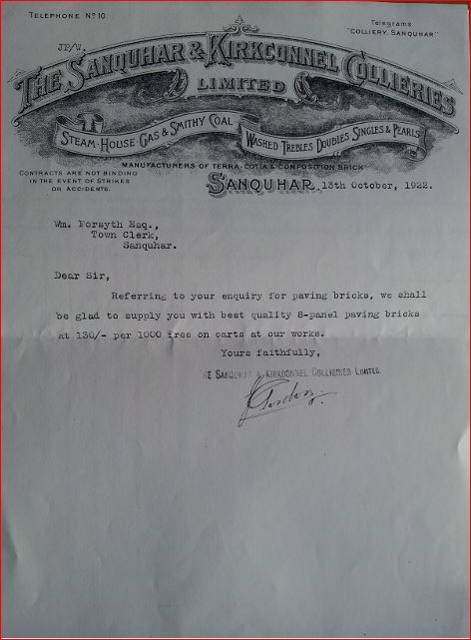 Help Help! – Scottish bricks, information and areas to search are all requested.

If anyone has found a Scottish brick, anywhere in the world, then please get in touch. If it is abroad I would love to post a small article on my site with regards the overseas find location and any background information you may have
.
If you have found it in Scotland then please drop me an email with the brickmark details and I will check to see if we are aware of its existence. If we are not then I will add it to this National database of Scottish brickmarks. All donations of a currently unknown Scottish brickmark will, of course, be gratefully received. I will arrange a pick-up.
.
Please also send me details of where you think I should look for Scottish bricks, old brickwork sites, foundry sites, river and shore dumps, fly-tipping areas etc. All will be considered for a future visit.

Please click on the link below and see if you can assist with any of the queries or unidentified bricks - research takes a long time so any help in this area would be gratefully accepted. 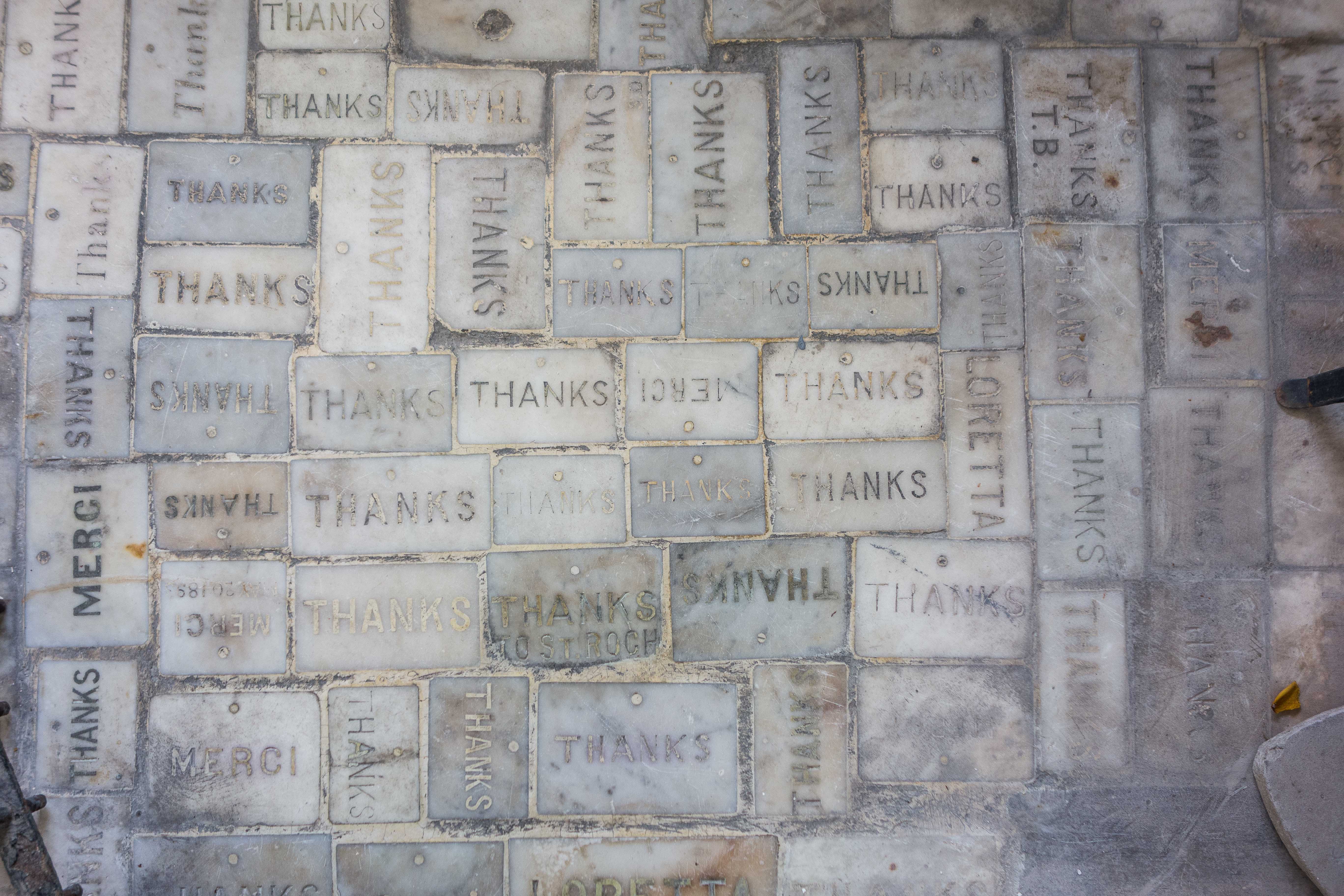 Can I take this opportunity to thank everyone who contacts me with information as to where I might find bricks lying around or indeed those that actually find and put aside a few examples for me to uplift later.

This assistance is greatly appreciated and undoubtedly helps me in trying to rescue as many Scottish bricks as possible. Thank ye kindly.

'Scottish Brick History' is entirely self-funded. If you feel you are in a position to help keep this database available for educational and research purposes then please consider leaving a donation towards the costs of the website, research and searching and travel costs. Your assistance is very much appreciated.

My Paypal email address is brickmarks@gmail.com

Thank you for registering your interest in Scottish Brick History

This form is being used to simply gauge interest in this heritage project. Occasional emails may be sent to highlight interesting finds and information.

Please use the search field at the top right hand of the page. Any 'coloured' text will usually take you to another link. Hover your 'mouse' over the text and click! If you are reading a specific post, please take a look at the end of the text to see if it is 'tagged' - if it is then click on the tag text and this will take you to all the related items.