13/09/1878  and  28/02/1879 – Glasgow Herald – Brickwork to let – Brickwork. To let, at Crossflat Limeworks, near Muirkirk, a field of fire clay and blaes for brickmaking. The field is connected with Caledonian and South-Western Hallway and contains first-class material for a large output of bricks for which there is ample demand in the district. The necessary plant is nearly all on the ground, and kilns are partly erected, and both may be had at a valuation. For further particulars apply Crossflatt Lime Co, 83 Bath Street, Glasgow, where Offers will be received. 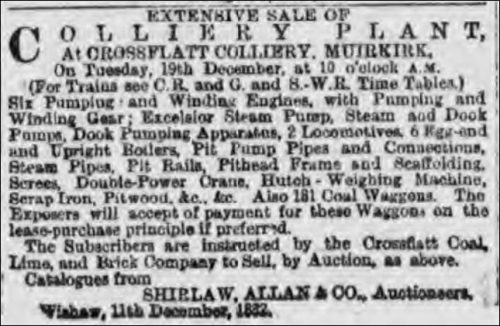 24/12/1883 – Glasgow Herald – Destructive fire in Glasgow. Damages £12,000. Early yesterday morning a fire of a very destructive character occurred in the block of buildings at the south west corner of St Vincent and Renfrew Streets … Among the firms affected by the fire are … Crossflatt Coal, Lime, and Brick Co …