The discovery at North Berwick of the remains of a thirteenth-century kiln for making floor tiles is of exceptional importance and interest. It is the first of its kind of mediaeval date to be recorded in Scotland, and it establishes the certainty of the local manufacture of the floor tiles recovered from the ruins of the Cistercian convent at North Berwick during the first half of the last century. These are now in the collections of the National Museum, of Antiquities, the Royal Scottish Museum, and the British Museum.

In 1908 workmen happened to come across the remains of the kiln, which they unfortunately partly destroyed. Further damage was prevented by the owner, and what remained of the kiln was left undisturbed until last October when I obtained permission to make an examination. The safeguarding of small trees and shrubs growing on the site prevented the entire removal of the debris from the remains of the kiln chamber, this also prevented the examination of the outer face of the structure and of the ground outside the kiln where it is possible that further evidence of the tilery lies buried.

The kiln is situated 30 yards to the north of the line of the ruined north wall of the convent and on slightly lower ground. The chamber (see diagram below) is 10 feet wide, and when complete it may have been square on plan. The remains consist of a south or end wall, 6 feet of the east wall, and 3 feet of the west wall. The floor is 3 feet 6 inches below the present ground level, and the walls stand to a uniform height of 18 inches. These are about 2 feet thick and are constructed of rubble packing, bound “with lime mortar, and faced on the inner side with tile-bricks. The arched fire-openings are in the side walls. Two arches and the remains of another are in the east wall, and there is one in what remains of the west wall. These openings are constructed of brick and are now incomplete. Over the arches, whinstone spalls and roofing tiles were built in horizontal beds. On the south wall there is a roughly built scarcement composed of limestone rock, and above it, 6 inches from the floor, appears a line of crude beam holes arranged at 17-inch centres. The top of this wall overhangs slightly, indicating that it carried a brick vault. The holes may have been used during the construction of the covering vault of the kiln. This seems a more probable explanation than associating the use with a platform floor. A brownish streaked, vitreous deposit having a slightly corrugated and glazed surface covers, to within 6 inches of the floor, the internal face of the kiln.

Both the floor of the chamber and the hearths of the fire-openings are at the one level; they are hornised with whinstone spalls set on edge and were covered with a 1-inch layer of the charred deposit containing some pieces of coal. Above this level, the remains of the chamber were packed with debris consisting of limestone and whinstone rubble, broken ornamented floor tiles and spoilt specimens (wasters), a few unglazed floor tiles of large size and a freestone wrought with a string course and annulet of the First Pointed style. There were also clay, and soil intermingled with some small shards of pottery, and a few animal and fish bones, oyster and whelk shells. From all indications, it is obvious that at an early period the upper part of the kiln had been intentionally taken down to the ground level by the tilers on completing their work at the convent, and the rubbish was deposited in what was
left of the chamber at that time. Judging from the range of tiles found, it is evident that the output was a comparatively large one, but this tilery does not appear to have supplied any other building, as no tiles similar to those at North Berwick have been found. 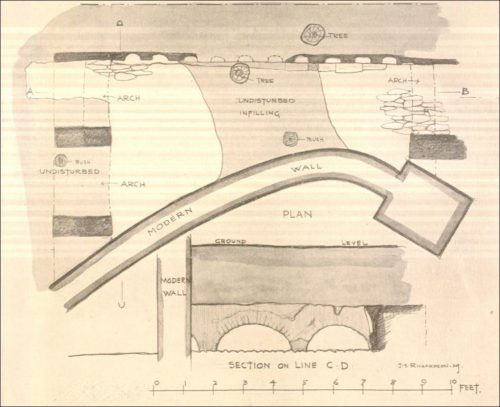