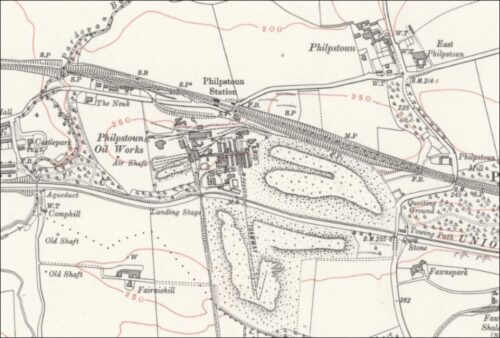 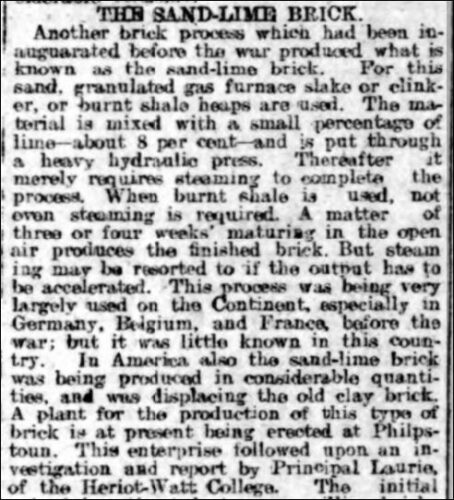 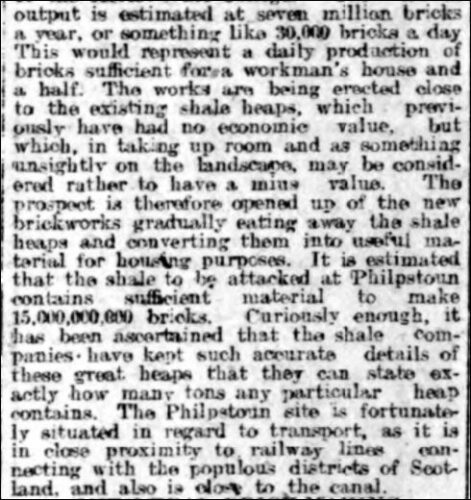 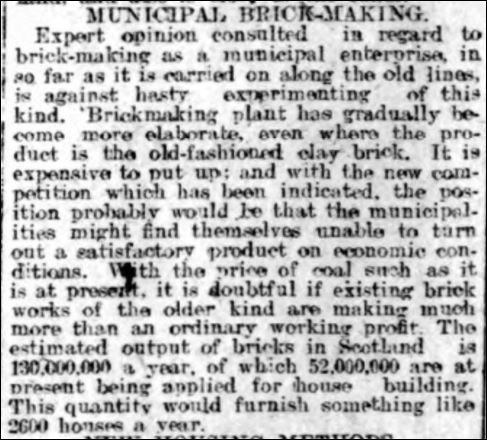 Below – 01/04/1921 – Linlithgowshire Gazette – Article stating that the Philpstoun Oil Works are in the process of building a brickworks on-site to manufacture bricks from the spent shale and bing waste. 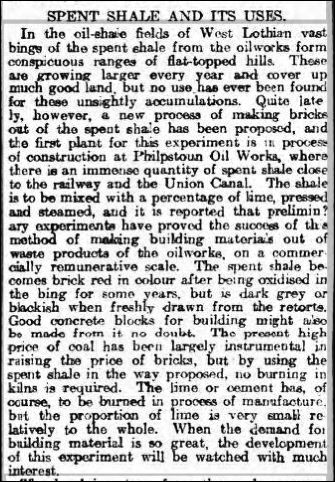 02/09/1921 – The Scotsman – The British Brick Company Philpstoun beg to announce that they have opened a new brickworks at the above, fitted up with the latest and most modern machinery, and are now in a position to rail large supplies. Prices and samples may be had on application to the manager at the works. Registered Office, 13 Duke Street, Edinburgh.

Below – 08/10/1921 – The Scotsman – Shale heaps and houses. A transforming process. Development in Scottish brick making … 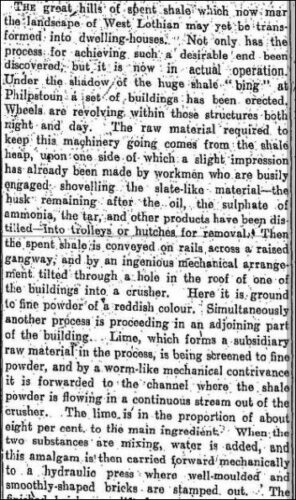 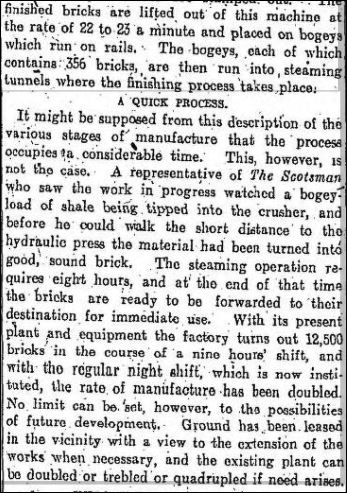 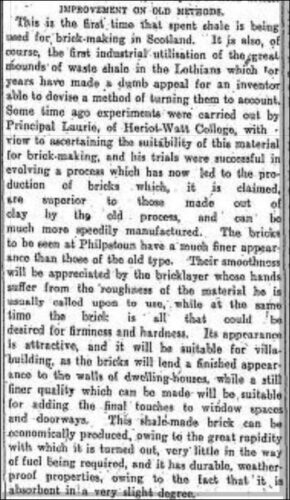 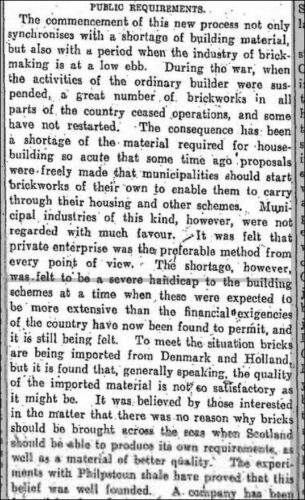 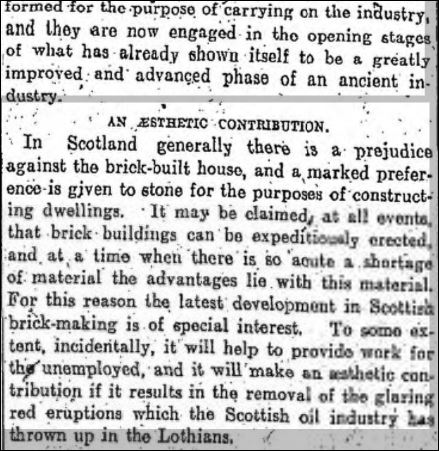 Below – 28/10/1921 – Linlithgowshire Gazette –  We have just seen a sample of the new bricks which are being turned out at the rate of 10,000 bricks per day at the new works at Philipstoun. The brick is of a grey-ish granite-like appearance and is made from 50% of lime and spent shale. It will be interesting to see how this new product goes on the market. £5 per 1000 is the price we understand. If the Philipstoun venture is a success we can look for an extension of the new industry. No one would regret the disappearance of the shale bings and the creation of work would be manna to the hard-hit shalefield workers. Mr Thomas McKelvie, Port Buchan House informs us that it is a mistaken idea that bricks have not been made in this district from the spent shale. In 1870 Mr McKelvie worked at the brick making plant in the Broxburn Oil Works then owned by the late Robert Bell, Gerson Park. The bricks were made half of clay and half of spent shale and were hand moulded. The staff was not a large one but a considerable quantity of these bricks were made. It took about ten days for the process in the kiln to produce the finished article. These bricks had a good sale and were mostly conveyed by canal boat to Edinburgh and elsewhere. Mr McKelvie is not aware of any local building being constructed with them. He says that time proved that the bricks would not stand the action of the rain etc and the demand dropped. The new scheme at Philipstoun has greatly interested him and he hopes to see in the near future plant established again on the old site.

10/12/1921 – London Daily News – Bricks without clay. A valuable new use for oil shale waste. A substitute has been found for the clay brick, which, largely owing to the operations of the ‘Ring Round the House’, is still too dear for modern building.  It is made from oil shale waste, and the claim is made that it will accelerate housing schemes by supplying promptly, high-quality bricks at a figure which will compare favourably with the price of imported stocks. The “Builder” this week gives full details of the making of the bricks, which has started by the British Brick Company, Philpstoun, Linlithgow. The oil shale residue is mixed with about 8 per cent, of lime and steamed, producing a sand-lime brick. An advantage of the process is that it will help to remove the vast hills of oil shale waste which at present disfigure the districts of the Lothians. Further, the bricks take only a few hours to make, and the coal consumption involved is low (3 cwt. per 1,000)1. The bricks vary in colour from dark blue to pale pink, and it is estimated that in the rubbish heap at Philpstoun there is enough material for the making of 1,000,000,000.

Below – 31/01/1922 – The Scotsman – Article on stimulus for the building trade with reference to the Philipstoun Brickworks. 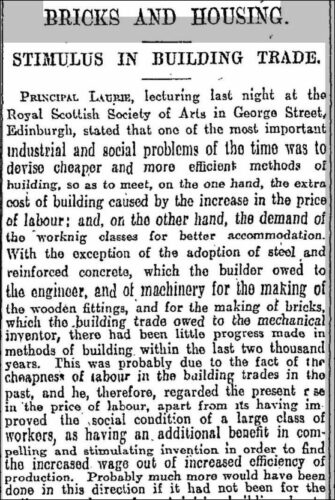 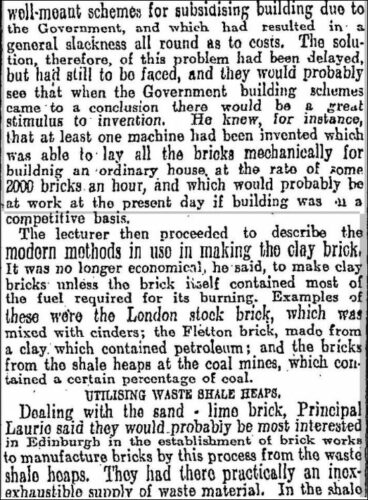 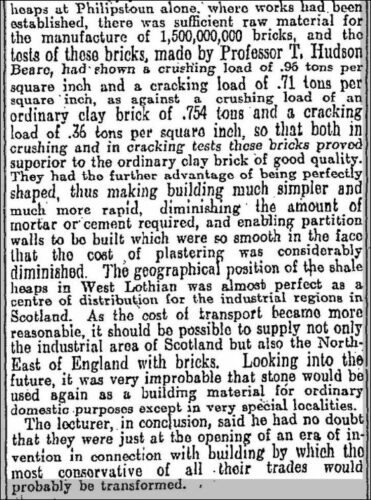 10/05/1922 – Kirkintilloch Herald – Kirkintilloch town council meeting … A letter was read from an Edinburgh firm of lawyers, on behalf of the British Brick Company, Ltd., with regard to the rejection of a quantity of bricks recently ordered for the housing scheme. It was mentioned that the waggons with the returned bricks were standing at Phillipstown Station, and the letter went on to say that they considered that this was very high handed action on the part of the Clerk of Works. It was claimed that the bricks were suitable for the same kind of work elsewhere and that they were superior to any other bricks obtainable. It was suggested that they might have been used for some other parts of the buildings, and the letter closed with the intimation that meantime they were standing at the Town Council’s risk, who would also be responsible for all rail charges.  Mr Shanks said that a consignment of bricks had arrived that were quite different from any bricks that they had formerly obtained.  A load was brought down, and the Clerk of Works was surprised when saw them. He rang the architect, but he was away from home, and the assistant could not give him any information. He examined the bricks, and, in his opinion, they did not conform to the specification, which stated that the bricks were to be of a clay composition, hard burned, and so on. Those bricks were a new material altogether and were not burned at all but simply dressed, and in the opinion of the Clerk of Works, were quite unsuitable, and so he returned them. He (Mr Shanks) considered that on the face of it, this letter was impertinent, and he did not like the terms of it at all. Mr Stewart said the Convener should have some support from the Council in this matter. He saw some of these bricks, and personally,  he entirely agreed with the action of the Clerk of Works. They seemed utterly unsuitable for roughcasting. They were too smooth, and, as far as he could learn, they were made from spent shale, and not burned but pressed. They were soft and too smooth. Mr Shanks then read a letter which the architect had written to the firm, giving the reason for the rejection of the bricks. The letter stated they were too smooth for plasterwork or roughcasting and as all the underbuilding had been completed, there was no other way of using them. It was agreed to remit to the architect and the convener to deal with the matter further …

The Under Secretary for Health for Scotland (Capt Elliot). As the result of inquiries made through the local Authority, I am informed that the architect states that he does not insist on the use of Dougal’s Winchburgh bricks, but only that the bricks used shall conform to the specification, which required ” hard-burned” bricks. The local bricks referred to in the question are presumably those made by the British Brick Company (Ltd.) at Philipstoun. These bricks, which are made by a process new to Scotland, cannot be described as ” hard-burned”. But the Scottish Board of Health are aware that they have been used on other housing schemes, and so far with no complaints regarding them have reached the Board. In the circumstances of the present case, I do not feel warranted in interfering with the discretion of the architect, who would appear to be entitled to insist upon compliance with the terms of the specification. The Board are, however, taking steps with a view to ensuring that in future leases the terms of specifications may not be such as to exclude the use of any type of suitable brick whatever may be the process of manufacture.

20/02/1925 – West Lothian Courier – At Philpstoun the plant set up by the British Brick Company is reported to be producing sixty thousand bricks per week. The brick is made of a composition of cement and spent shale. Principal Laurie, Edinburgh, has been one of the prime movers in the setting up of the Company, and he has big hopes for the new industry. The cost of production, it is stated, is low and the brick produced by the new mixture is said to be capable of being offered at such a price as to ensure for it a good demand.

31/12/1927 – The Scotsman – The British Brick Company in liquidation. Notice is hereby given that in pursuance of Section 188 of the Companies (Consolidation) Act 1908, a meeting of the creditors of the British Brick Company (in liquidation) will be held at 22 Charlotte Square, Edinburgh on Friday the 13th day of January 1928 at 11 o’clock forenoon. Wm Annan, C.A, liquidator, 22 Charlotte Square, Edinburgh 30/12/1927.

27/06/1928 – The Scotsman – The British Brick Company in liquidation. The business with works situated at Philpstoun, Linlithgowshire is for sale as a going concern. The lease provides a practically unlimited supply of spent shale from which excellent bricks can be made. The capacity of the plant is approximately 50,000 bricks per week. Ample room for extension. Railway siding. For further details apply to Wm Annan, CA, 22 Charlotte Square, Edinburgh, liquidator. 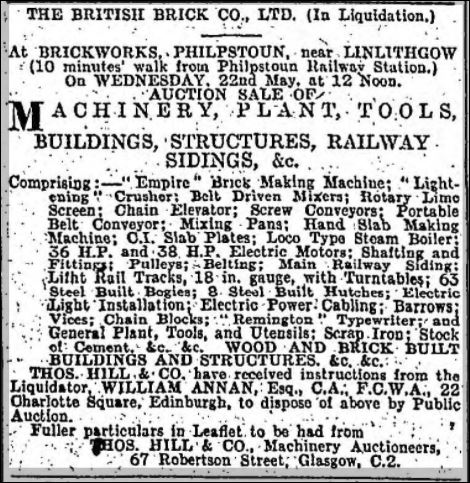