21/09/1896 – Feodor Boas patent.  Be it known that I, Feodor Boas, a subject of the Queen of Great Britain, residing at St. Hyacinthe, in the Province of Quebec, Dominion of Canada, have invented certain new and useful improvements in compounds of matter; and I do hereby declare the following to be a full, clear, and exact description of the invention, such as will enable others skilled in the art to which it appertains to make and use the same. My invention consists of an improved compound of matter to be used as wall-plaster and for other similar purposes.

The said compound results from a mixture of crushed chrysotile-bearing serpentine rock, heretofore a waste product in asbestos mining, and a small proportion of lime, with a sufficient quantity of water. The mineral chrysotile finds application in the arts as one of the forms of asbestos when it occurs of sufficient length of fibre. In mining the commercial chrysotile a large quantity of serpentine rock is of necessity removed and thrown upon the dump as waste material. Chrysotile is essentially a hydrated basic silicate of magnesia, and it generally occurs in nature as fibrous layers in massive serpentine, which chemical analysis shows to be of practically the same chemical composition as the fibrous mineral. The massive serpentine is then the gangue of the fibrous chrysotile. This massive serpentine gangue often contains small seams of chrysotile, but they are of too short fibre to find use as ordinary asbestos. This waste material accumulates at the mines and around the factories, and it is a trouble and expense to the industry. Many attempts have been made to utilize this waste, but previous to my invention without success. My invention, therefore, provides a useful outlet for this waste material. I have discovered that when this waste serpentine rock containing short fibered chrysotile is crushed and mixed with quicklime in proper proportions and then a suitable amount of water added the silicate of magnesia and the quicklime react together chemically and a double silicate of lime and magnesia is formed. This double silicate of lime and magnesia acts as a cement and binds the mass of the material together, forming a light, flexible, and strong structure which possesses particular advantages as a wall plaster and for similar purposes …

14/12/1903 – Edinburgh Evening News – A new industry is about to commence at Bathgate in the manufacture of asbestic sand bricks under Mr Feodar Boas’ patent. (Feodor Boas).

05/05/1904 – Morning Post – The prospect of the Asbestic Brick and Tile Company, to which reference was made the other day, is now in circulation offering 25,000, 6 per cent preference shares for the subscription. It tells of a new departure in that subscribers are given the option until the end of next year of doubling their allotments at par.

Jan – June 1904 –  Edinburgh Building Trades Exchange – Mr A. Hunter Crawford delivered a lecture to the members of the Building Trades Exchange in the Exchange Rooms, 32, George Street, Edinburgh, on Friday night, on “Building Construction,” with special reference to the relations between architect and contractor during the carrying out of the work. Mr James Forrest presided. After referring to the preparation of the plans, Mr Crawford urged that architects should be more consistent in seeing that the material and method of building specified in the contract be adhered to, both for the sake of the client and also for the sake of the contractor, who in pricing his schedule was frequently doubtful whether all the materials specified would be strictly insisted upon. After describing various differences between English and Scottish practices, his usual form of contract was discussed. In the course of the lecture, Mr Crawford brought before the members, samples of a new asbestic sand brick, which is shortly to be made in the neighbourhood of Bathgate, and invited the opinion of the builders present on its qualities.

18/11/1904 – West Lothian Courier – There was a rumour this week that the Asbestic Brick Company, Bathgate, had suspended operations, but I am glad to state that there is no truth in the rumour. A number of employees have been dispensed with, and other changes are being made in the works. Fresh capital has also been raised and it is intended to resume operations after the vacancies are filled and other changes in the works effected at an early date. One of the new directors is Mr William Russell, merchant, Hopetoun Street.

21/09/1906 – West Lothian Courier – An article regarding a bronze age urn being discovered in the sand quarry which was being worked by the Asbestic Brick Company, Bathgate.

25/05/1907 – Airdrie and Coatbridge Advertiser – The ground, buildings, machinery and plant etc of the Asbestic Sand Brick Co Ltd, at Bathgate were yesterday exposed for sale at the upset price of £2250 and were purchased by Messrs Dodds, Simpson and Caesar, W.S, Bathgate for Mr P Russell. Immediately thereafter the machinery plant etc were re-exposed for sale in lots and brought good prices. Messrs Hill and Co, Glasgow were the auctioneers.

13/03/1908 – Edinburgh Gazette – Asbestic Sand Brick Company Ltd., in Liquidation. Notice is hereby given that, in pursuance of section 142 of the Companies Act, 1862, a General Meeting of the Members of the above-named Company will be held within the Liquidator’s Office, 15 Rutland Street, Edinburgh, on Monday the thirteenth day of April 1908, at twelve o’clock noon, for the purpose of having laid before them an account, showing the manner in which the winding-up has been conducted and the property of the Company disposed of, and of hearing any explanation that may be given by the Liquidator. The Company will be asked to declare, by Extraordinary Resolution, how the books, accounts, and documents of the Company, and of the Liquidator thereto, are to be disposed of. John J Falconer, Liquidator. Dated the 12th day of March 1908. 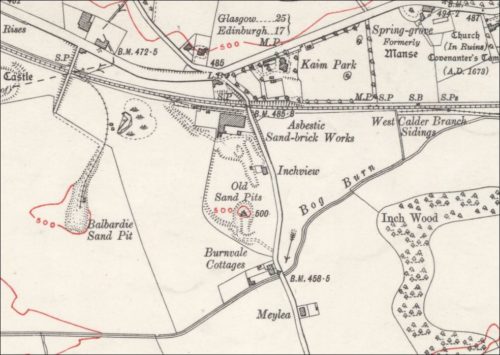 1938 – James Beveridge Anderson Begg was a partner in the firm of Messrs. Begg and Peebles, mechanical and electrical consulting engineers, of Edinburgh. He specialised in the installation of heating, lighting, and electric power equipment for public institutions and for municipal contracts.

He was born at Bo’ness, Linlithgowshire, in 1872, and was educated at the Heriot-Watt College and at the University of Edinburgh. In 1889 he began a six years’ apprenticeship with Messrs. James Bertram and Son, Ltd., of Leith, and was engaged in the manufacture of paper-making and rubber machinery.

He then went to Johannesburg and took charge of the erection of the pumping plant and a 20-mile pipeline from Zuurbecom waterworks to Johannesburg. After gaining additional experience as an assistant engineer at the Rose Deep Mine of Rand Mines, Ltd., he returned to Edinburgh as engineer and manager of the Asbestic Sand Brick Company, Ltd. He then turned his attention to automobile engineering and became assistant works manager to the Albion Motor Company, Ltd., Scotstoun, Glasgow, and subsequently works manager to Messrs. Middleton and Townsend, Ltd., of Edinburgh, motor car and tractor engineers. From 1908 until 1910 he was an engineer to the Scottish National Exhibition and Marine Gardens, Ltd., Edinburgh. He began his work as a consulting engineer in 1910, and in 1929 he went into partnership with Mr A. C. Peebles, O.B.E., M.I.Mech.E., the firm being reconstituted as Messrs. Begg and Peebles.