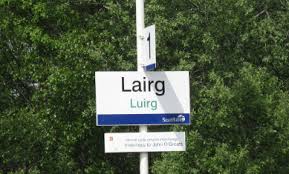 Many thanks to Stan Wilson, Dornoch for most of the information detailed here and for the permissions to reproduce the letters below.   Stan’s father, Frank Wilson used to be employed at the Works as Manager.

Canmore  – refers to the quarry but not the brickworks

Lairg Quarry and Brickworks were bought from Lairg Estates who previously run it.
It was bought by a consortium group, the main partners were Wm Tawse Public Works Contractors Aberdeen. The other main partner was McGruther and Marshall Builder Merchants who in recent years were taken over by  Travis Perkins.
Another shareholder was a Company from Dundee, Hoods. See below a copy of a letter of congratulations from them when the Lairg Brickworks produced over 3 million bricks in 1951.
The bricks were made of sand and lime and then went into high-pressure steam ovens called autoclaves for curing,
There were large coal-fired boilers that produced the high-pressure steam, hence the connection with Hoods who supplied the coal.
The brickworks also sold Cement/lime/Stone chips/sand etc, to the local builders, or Masons as they were called then.
The quarry side of things came to a halt due to blasting restrictions, as it was right beside the Inverness Thurso/Wick railway line.
The brickworks closed about 1954 at a time shortly after Brora Brickworks re-opened again.
The press that punched out the bricks went to Reay up in Caithness where I believe Wm Tawse produced cement bricks.
The Lairg brick did not stand up to the weather very well unless they were plastered or rendered.
They also produced coloured bricks.
There are the remains of Lime Kilns on what is known as “The Aird”. (Canmore) – The lime used to come down Loch Shin by boat to near the mouth of the River Tirry or Terry as it is known locally. Then there was a cableway arrangement up to the road, with pylons or towers for these cables.
Due to the hydroelectric dam built in the 1950s (Canmore)the Lime Kiln are now flooded when the water level is high.
The lime later came in by rail, there was a rail siding at the brickworks which was next door to the Railway Station which was about two miles from Lairg. Some bricks actually were transported by rail. 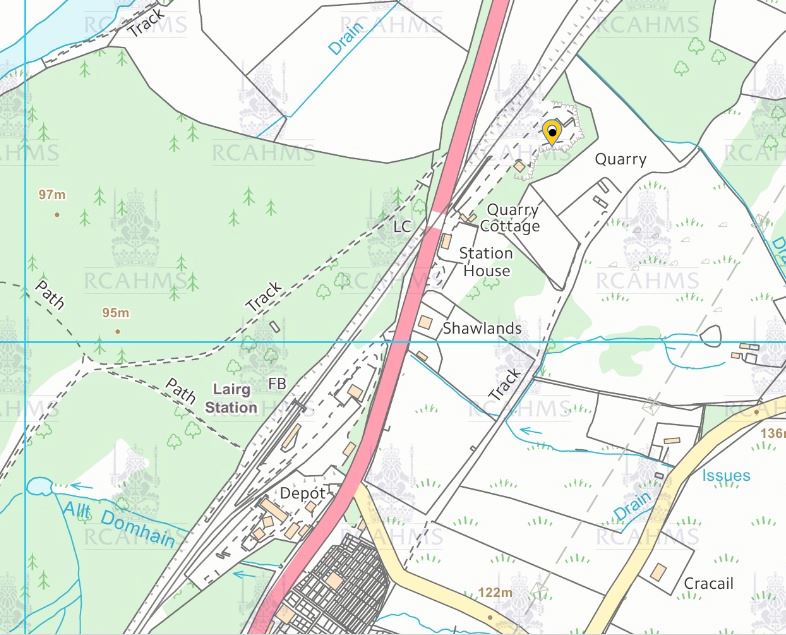 28/06/1937 – Aberdeen Press and Journal – Sand lime bricks at Lairg. Sir E. Horne’s enterprise. A new era in the manufacture of bricks in the Highlands was inaugurated at Lairg, Sutherland, on Saturday, when Sir Edgar Home, Bart., pressed a button and set in motion machinery for the production of sand-lime bricks. Sir Edgar, who is the proprietor of Lairg, has already spent thousands of pounds in installing a fully equipped laundry, powerhouse and quarry. His latest contribution to the prosperity of Sutherland, and Lairg in particular, was one which will add considerably to the assets of the county. Mr A. S. Lewis, the controlling engineer, in introducing Sir Edgar to the large company of contractors, architects and county officials from all over the north, said that the machinery about to be set in motion would produce a sand-lime brick equal to if not better than any in the country. Without a word, Sir Edgar touched the button and the mill was set in motion. Following the ceremony, Sir Edgar entertained a large company at luncheon. He expressed delight at having such a representative company present and said he hoped his latest venture would prove a success. His main ambition, he said, since going to Sutherland eighteen years ago was to see the county prosper. If there was prosperity it would retain the native population. As a southerner, he admired the beauties of the county and the hospitality of the inhabitants. It was through the impression formed that he endeavoured to promote the industry in their midst and he hoped that in some small way he had helped to create labour for people who might otherwise have to leave their native home. Sir Edgar was proposing “The County of Sutherland,” and said that in the latest venture he would have the full support of county bodies. Sir Alfred N. Macaulay, Vice-Lieutenant and convener of the county, said that Sir Edgar was very modest in his claims for all he had done for the shire. Sir Edgar was not only a landlord; he was much more; he was a benefactor. All realised Sir Edgar’s generosity and he wished that latest work the success it deserved. The concern is the first brick-making plant in Scotland to manufacture bricks from sand and lime under steam pressure. It has an output of 50,000 bricks weekly, which can be increased if the necessity arises. The sand, which has proved excellent for the purpose, is obtained locally from Loch Shin, and the lime is imported. The sand-lime bricks are ready for building as soon as they are delivered from the machine. The bricks are made in eight hours and are delivered off the machine at the rate of a brick every two seconds. They are practically dampproof and have proved so satisfactory that they were used in the recently-constructed London headquarters of the Royal Institute of Architects and Engineers.
25/11/1946 – Dundee Courier – Brickworks and quarry situated at Lairg, Sutherland, and adjoining the main L.M.S. Railway Station Lairg, and with special siding thereto, are for sale, by a private bargain. Sand and lime brick, with an output of over 2,000,000 bricks a year. Quarry produces road metal, chips and bottoming. For further parties, and arrangements to view apply to the Subscribers. Middleton, Ross and Arnott, Solicitors, North Bank Buildings, Dingwall.
Below – 1947 – Letter from Lairg Quarry and Brick Company re managers post. 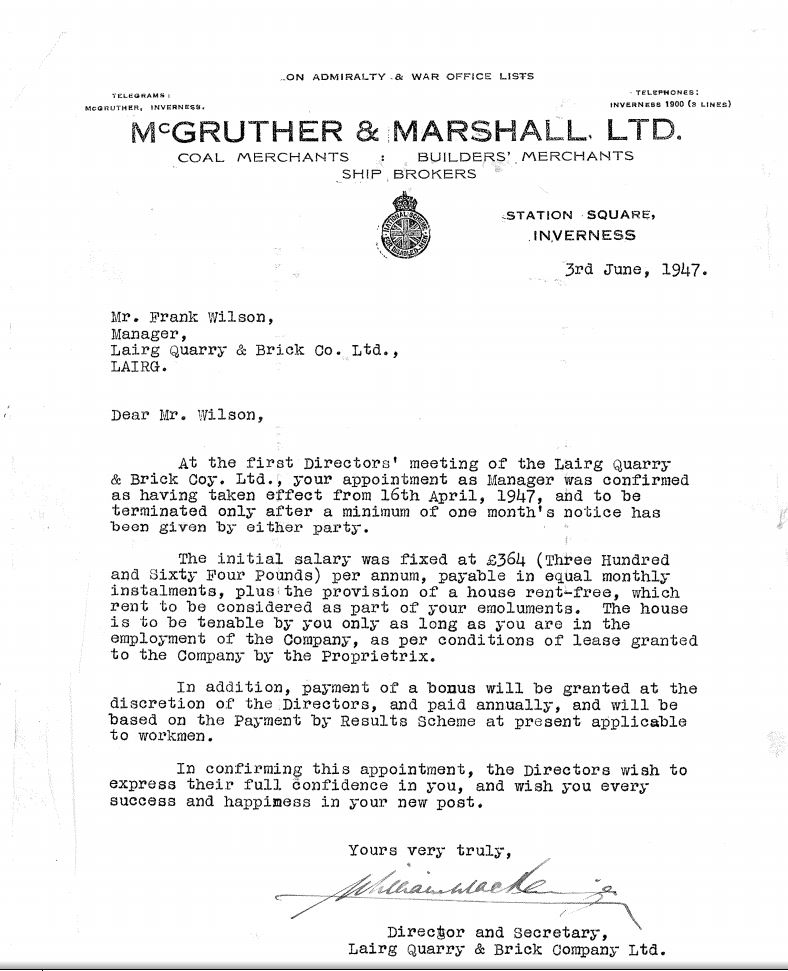 Below – 1951 – Letter from Smith and Hood congratulating Lairg Brickworks on manufacturing 3 million bricks. 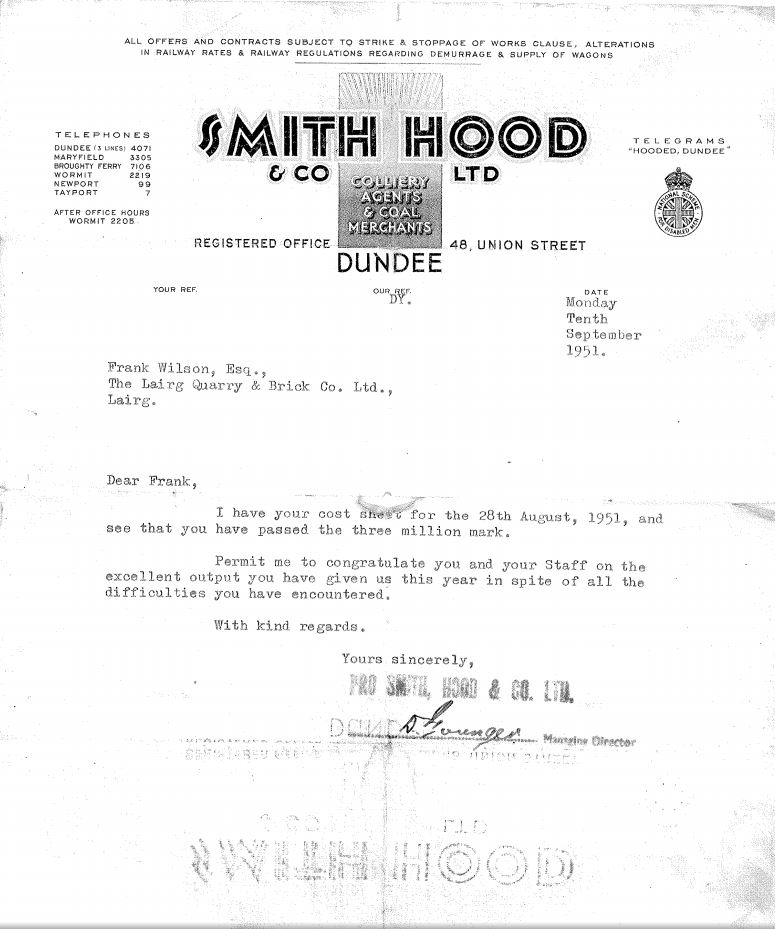 Below – This unmarked brick was manufactured at Lairg Brickworks. It was recovered on-site by Stan Wilson.

It is from the wall of the brickwork’s office building.  This would be from a date before 1947. 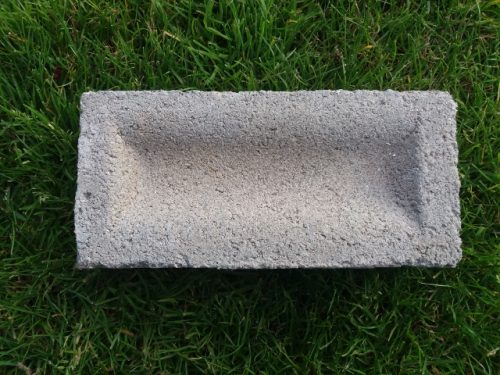