20/12/1955 – Aberdeen Evening Express – Two ‘decent men’ fined for theft and reset. A former brickworks foreman who stole 6 tons 6 cwt 3 qr, of scrap metal and 3 tons of cement from his employers was fined £2o to-day by Sheriff McDonald at Aberdeen. For resetting the cement another man was fined £10. The former foreman, John Stewart Cameron, (37). 4 Danestone Terrace. Bridge Don. dealer pleaded guilty to stealing the scrap metal at Harehill Brickworks, Murcar occupied by John Fyfe Ltd., quarry owners between June 17 and December 8. William Birnie, a motor lorry driver, 35 Ashvale Place, Aberdeen admitted resetting the cement. The fiscal, Mr A. L. Nixon said that on four dates Cameron sold the metal and received a total of £12. A dealer later sold it for £33 18s 6d. Regarding the cement, it was discovered that Cameron had instructed one of the firm’s lorry drivers to unload it onto a lorry used by Birnie who had frankly admitted having bought the cement from Cameron for £6 and later sold it for £12. It was valued at £21 and had not been recovered. Mr Nixon said that Cameron, a married man with one child, had been with the firm for four years and earned £10 a week He had now been dismissed.

27/04/1967 – Aberdeen Press and Journal – Cruden Bay girl injured in a brick machine. A 15-year-old Cruden Bay girl, who started work as a brickworker only two months ago was badly injured yesterday when she was in an accident involving a brick-making machine.  Katherine Bowman, of  Aulton Farm Cottages, Cruden Bay, was rushed to Aberdeen Royal Infirmary. Foresterhill where she was “fairly satisfactory’ last night.  She is understood to have broken both her arms and to have been severely bruised. The accident occurred at Harehill Brickworks, Murcar, Bridge of Don owned by John Fyfe Ltd, granite quarry owners, Aberdeen. Mr Walter Gillan, 20 Blairythan Terrace, Foveran, foreman at the brickworks said that Katherine had been tending one of the brick making machines along with other employees when part of her clothing caught in the machinery and she was pulled into it. Some of her clothing was torn off before that machine could be stopped. She is one of several woman employees at the works.

25/04/1973 – Aberdeen Press and Journal – Fitter required for maintenance work in brickworks in quarry. Welding experience an advantage. Good wages and conditions. Overtime available. Apply to Mr Black, Davidsons Contractors Ltd, Shielhill, Bridge of Don, Aberdeen. Tel Murcar 316. (Note – SBH – I am uncertain if this is linked to the Harehill Brickworks but I have detailed it here meantime to ensure it is recorded). 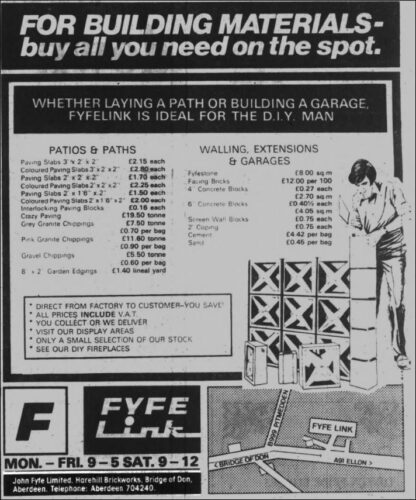