(Note – SBH – I have added some mention of Siporex here as a matter of interest only. It was a purely cement-based brick – no clay of any description used).

Siporex is a lightweight autoclaved aerated structural material with high thermal insulation value and low shrinkage and moisture movement. It is non-combustible, almost white and its density is about one-fifth that of normal concrete. Siporex will be manufactured as building blocks, storey high partition slabs, vertical and horizontal wall slabs, roof and floor slabs of a standard width of 24″ and up to 20′ lengths. Units other than blocks will be reinforced with mild steel. The accuracy and large sizes of the slabs allow simple finishes and virtually all dry construction. Siporex is synonymous with simple. rapid and cost-saving erection techniques.

Competes favourably in price with other building materials for the same purposes.

Provides its own insulation while functioning as a structural material.

Saves in field labour as it requires fewer man-hours to install.

Saves in structural framework because of its lightweight.

Speeds up construction schedule, being a dry, prefabricated unit.

Requires a minimum of surface treatment as it is smooth and white.

Needs no heavy machinery to be set in place. 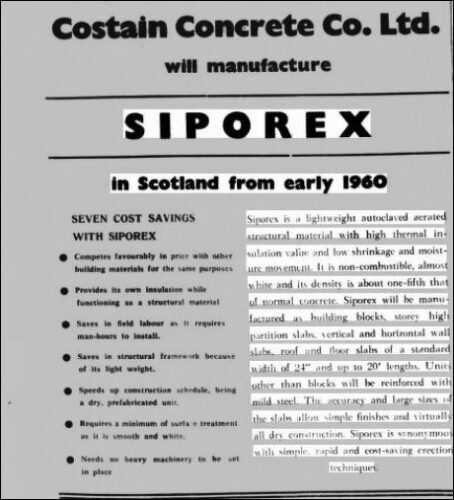 12/06/1959 – Wishaw Press – Costain to open Siporex plant at Newarthill. Siporex. That’s almost certainly a new name to you. But if a group of British businessmen are forecasting correctly it is going to figure prominently in our future building programmes. Siporex is a Swedish building material with a big success story which is now to be manufactured in Scotland. The sole rights for Britain and Eire have been acquired by Costain Concrete Company, Ltd., and in his Newmains office on Monday, Mr James Beattie. managing director announced that his firm had chosen Newarthill as the spot for their first plant. In deciding on Newarthill, Costain will bring jobs to some of Lanarkshire’s workless just as they did ten years ago when they set up their Newmains factory. They have bought over the former British National Electrics factory and hope to go into production around January or February of next year. Over £500,000 is being sunk in the initial development. Honeycombed in cross-section it bears a structural similarity to a certain well-known brand of aerated chocolate. Siporex is only one-fifth the weight of conventional concrete but couples high strength with its lightness. As an advertising pamphlet states: ” It is as light as wood but has the characteristics of stone and is incombustible. Siporex can be nailed, cut, sawn, drilled and chased with woodworking tools. Another advantage of the product is that it provides its own insulation and does so to a very high standard. It insulates three to six times better than brick and therefore cuts heating and air conditioning costs and gives greater comfort in all climates. And that’s one main reason why Siporex has proved so popular wherever it has been produced in the world, from Finland in the North to Venezuela on the equator. Newarthill will be the world’s twenty-third Siporex plant and like the others will produce it in pre-fabricated slabs, beams and blocks. Units other than blocks will he steel-reinforced and will include storey high partition slabs, vertical and horizontal wall slabs and roof and floor slabs. Siporex’s lightness makes it particularly suitable for use in multi-storey buildings and the prefabricated units greatly speed up erection time and help to cut costs. The lightness also increases the transport range of the product. Mr Beattie mentioned on Monday that they would be able to transport Siporex economically to the North of Scotland and well down into England. Later, of course, it is intended to set up plants south of the border. But apart from large scale building projects, Siporex is just as at home in the private house and construction is greatly assisted by the accurate dimensions to which the units are turned out. And, say the Costain Chiefs, it is a material which is in the traditional Scottish style from the external viewpoint. At the same time, they feel that it will revolutionise building in this country. Mr John W. A. Ager, director in charge of research and development for the firm, predicted this at Monday’s meeting. He was supported by Mr George Timmins, M.P. for Bothwell division, who has been co-operating with the firm in finding suitable premises. And that prediction is being backed by £500,00, with more to come. 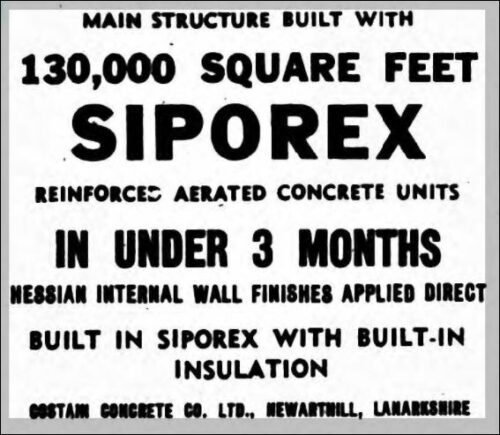