The Inverkeithing Brickworks that were built for use in providing bricks for the Forth Rail Bridge.  They were never used and it is likely these are the same works that were later used by Cruicks Pottery and Terracotta Works.

They were erected because the original Forth Rail Bridge plans required the bridge to built from brick and iron. This plan was then abandoned and a new plan was later developed in favour of a steel bridge.

30/12/1879 – Dundee Courier –  The Forth Railway suspension bridge … The contractors selected are Messrs Arrol & Co and Dalmarnock Iron Works, Glasgow who will execute the whole of the works in brick and iron …

Below – 31/01/1880 – Alloa Advertiser – Mr Arrol acquires a clay field around South Queensferry in order to manufacture bricks for the Forth Bridge.

05/02/1880 – Fife Herald –  An arrangement has been entered into between the Inverkeithing Town Council and Messrs Arrol & Co, contractors for the Forth Bridge, whereby the latter are to lease the extensive clayfield belonging to the Burgh for the purpose of making bricks.

Below – 24/04/1880 – Dunfermline Press – Wm Arrol’s Brickworks to be sited on the south side of Inverkeithing Bay. 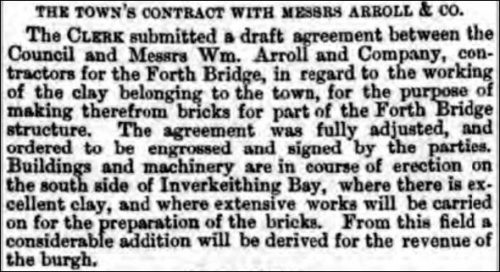 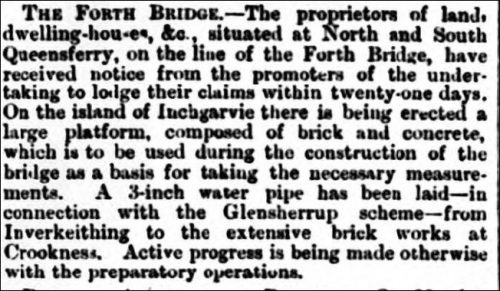 Below – 11/12/1880 – Dunfermline Saturday Press  … But there was still hope for Inverkeithing when a Bill was passed, and arrangements made, for bridging the Forth at Queensferry; and more particularly so, when the Harbour of Inverkeithing was found contain an excellent bed the very material required the bricks necessary for the construction of the Bridge. The clay was leased, the brickworks erected, and the manufacture of the article commenced; when the Bridge was suddenly abandoned, the brickworks stopped, and the ill-used, but still sturdy and pugnacious old Burgh once more left in the lurch …

Below  – 20/05/1881 – Dundee Advertiser –  Brickworks to be manufactured at the Bay at Inverkeithing in order to supply the Forth Bridge build. 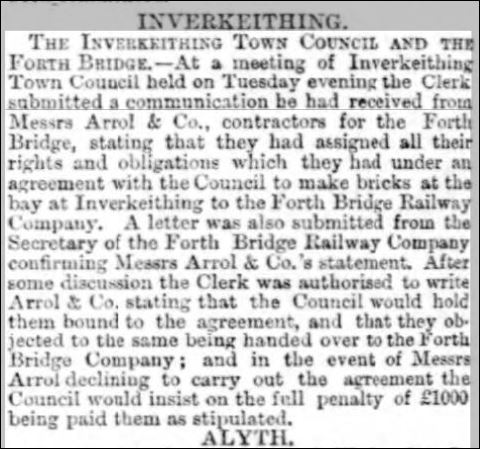 13/07/1881 – North British Daily Mail – Appeal. Arrol & Co v Todd. This was an appeal from the Sheriff Court of Lanarkshire at Glasgow in an action raised by George Todd, brickmaker, residing in Claythorn Street Glasgow against William Arrol & Co, engineers, iron founders and contractors, Dalmarnock Iron Works, Bridgeton, Glasgow for payment of £104 14s 1d for alleged breach of contract. The pursuer averred that he was at present out of employment; that the defenders were in February 1880 contractors for the erection of a railway bridge across the Firth of Forth between South Queensferry and North Queensferry; that in connection with the erection of said bridge the defenders started a brickwork at Inverkeithing near North Queensferry; that he was engaged by the defenders as manager of said brickwork for 1 year from 23/02/1880 at a salary of £150 per annum, with the addition of a premium or payment of 1 penny per thousand on the output of bricks; that he discharged the duties of manager till 14th August last, when the defenders intimated to him that in consequence of the abandonment of the Forth Bridge undertaking his services would no longer be required and they accordingly dismissed him; that the defenders paid him to the account of 375, leaving a balance of salary alleged to be due of £75, which, with £29 0s 4d of premium on bricks amounted to the sum sued for. The pursuer maintained that he had been wrongfully dismissed and that the defenders had broken their contract without reasonable cause.

Counsel were heard today after which the court adhered, with additional expenses.

Below – 01/10/1881 – Glasgow Herald – Directors of the Forth Bridge Railway Company visit the site … In crossing the Forth the engines were slowed and a pretty close look was taken at the Island of Inchgarvie on which the central structure of the bridge will rest. At the West end of the Island, there is yet to be seen some of the works intended as the substructure of the central towers of the new abandoned Forth Bridge as planned by the late Sir Thomas Bouch. These consist of a solid block of brick and concrete 81 square feet and 13 feet high surmounted by a stone plinth 2 feet in thickness. The block was formed by building four brick walls 8′ 6″ in thickness and running the centre in solid with concrete … They afterwards proceeded to Inverkeithing close by which it is understood that the Forth Bridge Railway will now run. At this place, a number of extensive workshops were built and a quantity of expensive plant was put down by Messrs Arrol & Co, the contractors for the abandoned bridge. The buildings and appliances have been allowed to remain as it is considered not improbable that they may be used in connection with the new undertaking …

Below – 08/01/1883 – Edinburgh Evening News – Forth Bridge plan alterations exclude the use of bricks, therefore, the newly erected brickworks near Inverkeithing Bay would not be used. 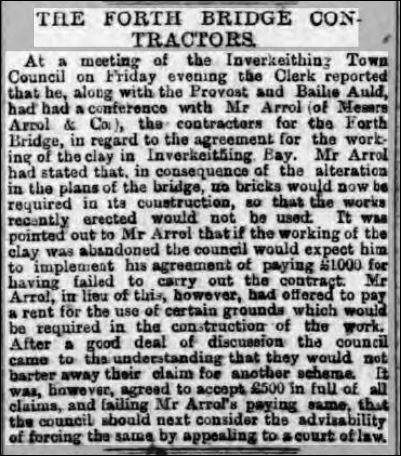 Below-  Old photo from an unknown source but it was sent to me with the following caption – Contractors engaged in the Forth Railway Bridge construction opened the brickworks on the south side of Inverkeithing Bay. Around 1893 it was taken over by Street Brothers of Townhill who made earthenware pottery there for some years. Pottery manufacture seems to have ceased around 1901 although brickmaking continued for a few years more. Later this site was occupied by the English shipbreaking firm of T.W. Ward, Sheffield, now R.M Supplies ( Inverkeithing) Ltd. A claypit behind their carpark is a relic of the former industry. 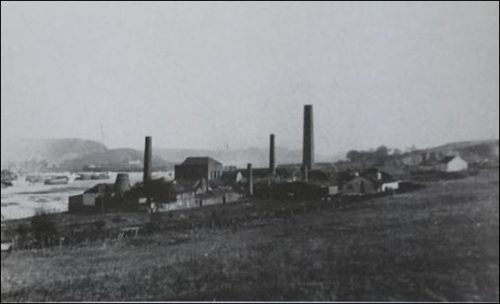