Cruicks Pottery and Terracotta Works, Inverkeithing, Fife – This should be read in conjunction with the entry of the Naval Base, Rosyth.

Below – c. 1898 – This photo was forwarded by Tony Connor. Tony states – My good friend Margaret Calder gave me a copy of the b&w picture. It shows the workers from John S Street`s Cruickness Pottery taken around the 1898 period. The bulk of the workers in the pottery were mainly incomer’s originally from the West Coast. Margaret’s grandmother can be seen sitting 3rd from the left. Her maiden name was Mary Barclay changing when married to Aitkinhead. She was born in 1878 and died in 1948. If you look closely you can see the two Robert Burn`s figures in the b&w picture. The two figures in the coloured picture originally belonged to Mary. (Note -SBH – Many thanks to both Tony and Margaret). 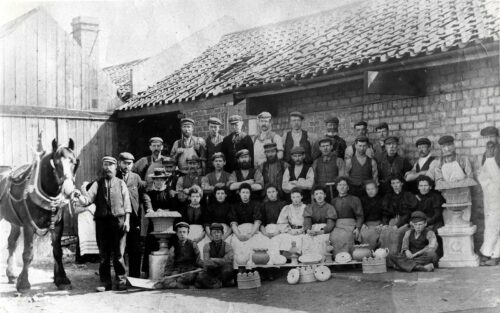 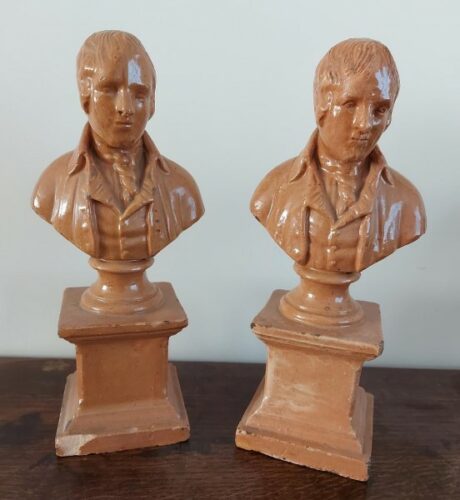 Street Brothers Limited, Brick and fire-clay goods manufacturers. Builders and Contractors, and Quarrymasters, Townhill (Dunfermline) and Inverkeithing. (Incorporated under the companies acts, 1852 to 1893.)

The preference shares are entitled to a cumulative preferential dividend of Five per Cent, per Annum, and also to priority on the Capital of the Company before the Ordinary Shares.  All the Ordinary Shares are taken by the Vendors in part payment of the Purchase Price.

Subscribers may pay up their Shares on Allotment, and they will receive Interest or Dividend at the rate of Five per Cent, per annum from the date of payment.

Bankers – The North of Scotland Bank Limited, Dunfermline, Aberdeen, Dundee, and Branches, or their Correspondents.

The Commercial Bank of Scotland Limited, Edinburgh and Branches.

The Company has been formed for the purpose of acquiring, Working, and Further Developing the Business of Brick and Fire Clay Goods Manufacturers, Quarrymakers, and Buildings carried on by the Firms of Richard Street and Sons and Street Brothers at Appin Fire Clay Works, Townhill, Dunfermline, and at Cruick Works, Inverkeithing.

The Townhill Business was established upwards of 60 years ago by the grandfather of the Vendors.  Both Appin and Cruick Works and Clayfields have been reported upon by Messrs JOHN and G. H. Geddes, Mining Engineers, Edinburgh, and Mr Alexander Christie, Manager, Seaton Brick and Tile Company, Limited, Aberdeen.  These gentlemen report that the terms of the leases of both fields are reasonable and satisfactory, and there is practically an inexhaustible supply of Blue, Surface, and Fire Clay of the best quality, that the works have been recently reconstructed and modernised, and that the buildings are up-to-date and in first-class order.  Both works are connected with the North British Railway by Sidings, and at Cruick there is, in addition, a Shipping Pier.  Messrs Geddes and Mr Christie estimate a gross profit from the works of £4420 per annum, calculated upon the basis of 20 per cent. below selling prices.

Mr Christie estimates the value of the whole Works and Plant at £31,937.

Or almost £3000 per annum.  The Cruick Works were acquired on 1st January last.  The sum of £1050 per annum is required to meet the Dividend on the Preference Shares, and by the Articles of Association the Directors are bound to set aside out of the profits, prior to the payment of any Dividend on the Ordinary Shares, a sum of £1000 per annum, as a Fund for the Redemption of the Preference Shares, until a sum equal to the amount of these Shares has been accumulated.  The Vendors (Mr Richard Street, Junior, and Mr Thomas Street) are the promoters of the company.  They have fixed the price to be paid for the whole Businesses, including Appin Works and Cruick Works and Quarries, together with the Leaseholds, Goodwill, Buildings, Machinery, Stocks, &c., at £34,000 payable to the extent of £21,000 by the issue to them or their nominees of the Whole Ordinary Shares of the Company fully paid up, and the balance in cash or in Preference Shares at their option.  The balance of £8000 of the present issue of Preference Shares is required for the extensions referred to in the Engineer’s Report, and to provide the Working Capital of the Company.  The vendor will provide all of the preliminary expenses incident to the formation of the Company to and including allotment.  There are Contracts, &c., incident to the current business of the Company.  Applicants for Shares will accept the above as sufficient notice and will be deemed to waive any further compliance with Section 33 of the Companies Act, 1867, with reference to Contracts and Agreements.  The Memorandum and Articles of Association of the Company, the Agreement, and Contract, the Leases, and Reports of the Accountants, and of the Engineers, and valuators can be inspected by intending Subscribers at the Offices of the Solicitor of the Company.  When no allotment is made the deposits will be returned in full, and where the number of shares allotted is less than the number applied for, the surplus deposit will be credited in the reduction of the amount payable on the Shares allotted.  Application will be made for a Stock Exchange Quotation for the Preference Shares.  Prospectuses may be obtained from the Bankers, Brokers, and Solicitor, and at the Offices of the Company. 11th April 1899. 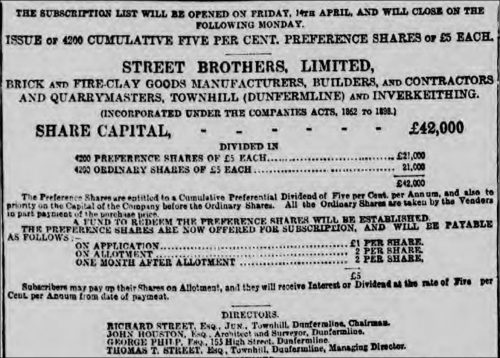 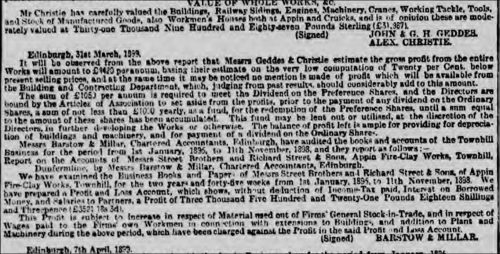 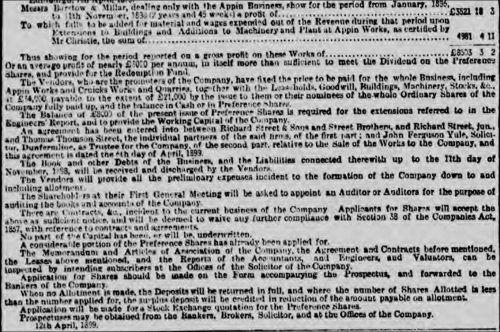 11/08/1900 – Kinross – shire Advertiser – Workmen’s compensation case – Judgement has been issued by Sheriff Gillespie in an action by Hugh Gavin, labourer. Abbot Place, Inverkeithing, against Street Brothers, Limited, Cruicks Brickworks, Inverkeithing. for compensation through getting his hand taken off while removing an accumulation of clay in a pugmill. The defence was that the accident was due to the pursuer’s own serious and willful misconduct. The Sheriff decided in favour of the pursuer, and awarded him at the rate of 8s per week for 6 months and 6s thereafter. In his remarks the Sheriff pointed out while there was much to say on the other side, he thought the circumstances were not such as to make the term ” serious and willful misconduct” applicable to the pursuers conduct.

19/08/1901 – Dundee Evening Telegraph –  New Works at Inverkeithing – Very extensive additions both in the way of building and the laying down of new plant has just been made to the Inverkeithing Works of Messrs Street Brothers Ltd, extensions which will give employment to a large number of hands. The firm had its origins in 1837, their fire bricks work being at Kingseat Hill and at the site now occupied by the house of Mr Ness. The father of the brothers Street was the first to make stock bricks in Scotland, at that time this class of brick commanding a much higher price than ordinary bricks.

The Townhill Brickworks was then opened and on the clay giving out there the Appin Brickworks on the Townhill Railway was started. 3 years ago the firm was formed into a Limited Liability Company incorporating with it Cruicks Terra Cotta Works, Inverkeithing. At these latter works the company have carried on the manufacture of teapots, vases and terracotta ware but owing to the extension of the bricklaying business of the Company under the superintendence of Mr James Street, new buildings and new brick making plant have been added to the Inverkeithing Works which are situated at the south side of Inverkeithing Bay, nearly opposite St Davids shipping port for Fordel Coal and a short distance from the hamlet of Jamestown and the old salt pans at Inverkeithing.

The new building is 4 storeys in height, while the new brick making plant is capable of turning out 2o,000 bricks a day and gives employment to some 150 men. The clay is taken from Inverkeithing Bay by means of a barge and crane and on the shore, a 3-ton crane has been erected which lefts the clay to the upper stores of the building. The clay then passes through various processes, gradually finding its way to the patent duplex brick making and brick pressing machine. A new kiln on the Hoffman principle has been erected with 14 chambers each capable of containing 16,000 bricks. The Company have also a whinstone quarry at Inverkeithing in which they have introduced a stone breaking machine. The clay in Inverkeithing Bay has the reputation of being of very good quality for brick making. The new works are to be formally set in operation today.

17/11/1906 – It is understood that the Tilbury Dock Coy have acquired the leases held by Street Bros Ltd, not only of Cruicks Quarry but of the brickworks at Inverkeithing Bay (p4 col 6)

24/11/1906 – It is understood that the Tilbury Dock Company have acquired the Cruicks Quarry at Inverkeithing, which was carried on by Messrs Street Brothers. The Tilbury Company also acquired a large tract of quarrying ground, and it is supposed that the concerns will be worked in connection with the Rosyth Naval Base.

08/02/1908 – Airdrie and Coatbridge advertiser – Permission is given to Tilbury Contracting and Dredging Company to convert part of Cruicks Brickworks into a slaughterhouse.

16/01/1909 – Kinross-shire Advertiser – Consideration being given to demolition of old brickworks at Cruicks, Inverkeithing and use bricks to build new cottages on the site.

Below – 27/05/1910 – The Scotsman – Compensation for loss of an eye – George Know Jnr,  Cruicks Brickworks, Inverkeithing claims against Easton Gibb and Son, contractors, Rosyth Naval Base, for the loss of an eye. 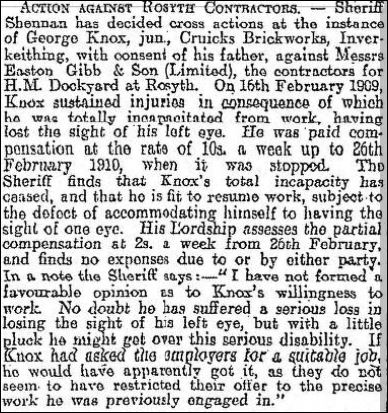 03/06/1911 – Dundee Courier – New industry for Inverkeithing will employ 300 men – The British Improved Construction Company, London, have acquired the old property Jamestown, Inverkeithing, utilised in connection with the Cruick’s Brickwork. They propose erecting extensive works for the manufacture of concrete piping and reinforced concrete. Work is likely to be given to about 300 men. Inverkeithing will be recognised as the company’s Scottish headquarters, and their own steamers will ply between the Forth burgh and the Thames. Application is being made to Inverkeithing Town Council to construct pier.

27/04/1912 – Fifeshire Advertiser – ln spite of repeated warnings from the police the old brickwork near Cruickness continues to be the favourite rendezvous for tramps and out of works during the night. Complaints have again been lodged by the proprietors regarding the destruction done to the property through the woodwork being torn down to provide fuel for their fire. During the coal strike, no fewer than 60 men were discovered on the premises on one occasion at midnight. These men were supplied with tickets by Mr Naismith, the navvy missionary, which provided them with free bed and breakfast in the adjoining lodging-houses. On Monday evening Sergeant Stuart, accompanied by five constables, raided the brickwork, and found 19 men reclining in various postures around a huge fire of wood. The men were quietly apprehended and marched to the police station. They were brought before Bailie Strachan on Tuesday morning and were each fined 5s with the alternative of five days in prison.

16/03/1916 – Fifeshire Advertiser – 2 labourers of no fixed residence were charged with lodging without permission in Cruciks Brickworks and with the removal of several roofing boards from the premises to make a fire. Baillie Wyllie said the damage to the Cruicks property must be stopped and he imposed a penalty of 21s or 21 days in prison …