19/08/1899 – Falkirk Herald – Discovery of minerals near Kilsyth – Mr Street, who recently acquired Coneypark and Tomsyne Estates, Kilsyth, Stirlingshire, has been conducting operations to ascertain what minerals underlie these estates. The existence of various valuable coal and clay seams, also a very rich seam of shale, never hitherto known occur locality, has been revealed. The seams vary from two to six feet. The clays, which on testing have proved of the best quality, include those suitable for the manufacturing of fireclay goods and enamel, and likewise splendid terra-cotta. Brick and pipe manufacturing will be commenced immediately, and coal measures will also be wrought. Mr Street is an enterprising Fife coalmaster and brickmaker as well as builder and has laid down plant on an extensive scale at Banknock with a view to starting the brickmaking industry there. He also intends to go largely into the building trade in the district, in which at present houses for the working class are unable to be obtained.

29/09/1900 – Kilsyth Chronicle – Interdict Action by Mr James Dobbie, iron founder, Banknock and Mr John S Street, Brick manufacturer, Banknock (Near Falkirk). Both had agreed to build a mutually beneficial railway on their lands but Mr Dobbie claimed that Mr Street had taken advantage of this situation and used further land of Mr Dobbies for his own use with regards to his brickmaking business. The court agreed.

26/12/1900 – Kirkintilloch Herald – A Stirlingshire coalmaster and his siding – In the Court of Session last Friday, evidence was led before the Railway and Canal Commissioners in an action at the instance of John Shepherd Street, coalmaster and fire brick manufacturer, Burnbank Colliery, Hollandbush, Stirling, against the Kilsyth and Bonnybridge Railway Company, the Caledonian Railway Company, and the North British Railway Company, for an order enjoining the Companies to restore the connection between the applicants siding and the Companies’ railway, and, to afford, according to their powers, all reasonable facilities in the receiving and forwarding of his traffic upon the Company’s railway at or near Banknock Station.  The applicant claims as damages a sum equal to £10 per day from 27th November 1899, till his siding connection, shall be restored.  In November 1899, the applicant made a slight deviation of the line which lay entirely within his own property, and on the 27th November, a gate was put across the entrance of the siding.  The respondents maintained the applicants deviated from the original plan fixed under the agreement, and the result was to make the siding difficult and dangerous to work.  They consequently refused to work it until it was restored to its former state.  After several witnesses had been examined the parties agreed that the engineers should consider what alteration of the levels was necessary to make the siding safe, and the Court agreed that the matter-although in all probability no more would be heard of the case-might be mentioned at the next sitting of the Commission.

06/03/1903 – Kilsyth Chronicle -Banknock – Action regarding a Feu.-In the Outer House of the Court of Session, last week, before Lord Kincairney, John Shepherd Street brick, manufacturer, Inverkeithing, sued James Dobbie, iron-founder, Hollandbush, for declarator of the defender’s forfeiture of all right to a feu contract between him and the pursuer’s authors of ground at Bonnybridge, in the respect that the defender has failed, as the pursuer alleged, to erect substantial stone or brick buildings for the purpose of an iron foundry.  The defender denied that the foundry, which he had erected, was disconform to the provisions of the feu contract, and pleaded that, as the pursuer’s feu-duty was amply scoured by the value of the foundry and other buildings he had erected, the pursuer had no interest to enforce the alleged irritancy.  After a proof, Lord Kincairney held that the construction of the contract must be strict and that in his opinion it did not provide for walls such as the pursuer demanded.  As there were brick buildings, including a chimney stalk, furnace, &c., erected by the defender for the purpose of a foundry similar to all foundries in the district, that, in his Lordship’s judgement, satisfied the conditions of the contract.  The defender was assoilized, with expenses. 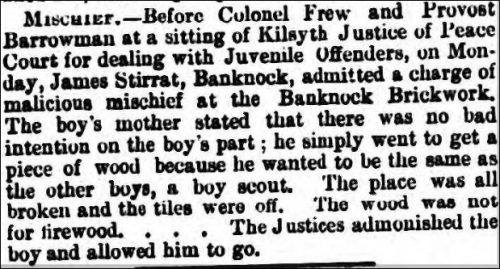 23/08/1912 – Kilsyth Chronicle – Banknock – The demolition of the brickworks has begun in earnest last week. Blasting was resorted to to get rid of some of the fixtures. 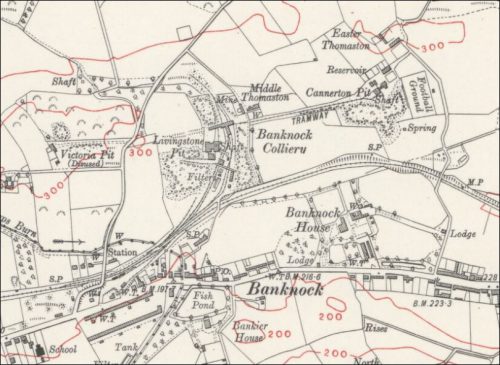 08/02/1913 – Falkirk Herald – Chimney stalk delays railway traffic – The taking down of the chimney stalk connected with the demolition of Banknock Brickworks resulted in an unexpected mishap. The stalk stood some distance from the Kilsyth and Bonnybridge Railway, and the workmen used explosives to upset it. Unfortunately, the stalk toppled over in the direction of the railway line, and in its precipitation smashed the telegraph wires bringing down several poles, destroying the fence, also damaging the permanent way, and delaying passenger traffic.