20/02/1891 – Hamilton Herald – Serious accident – On Wednesday last, a boy named John Ford, son of James Ford, Walker’s Court, Raploch Street, was seriously injured at Merryton Brickwork through falling among the machinery. He was at once rescued and attended to by Dr Stewart, who ordered his removal to Glasgow Infirmary, whither he was conveyed in the ambulance waggon. On arrival, it was found necessary to amputate one of his arms.

04/12/1894 – Dundee Courier – Sad accident at a Brickworks. Yesterday forenoon, at Merryton Brickwork, Larkhall, while a young man, named Robert Davidson, was in the act of bringing waggons to the brickwork, he got jammed between them. He was speedily extricated but died in a few minutes.

28/01/1895 – Dundee Advertiser – A boys sad end – On Saturday forenoon a sad accident occurred at Merryton Brickworks, near Larkhall, whereby a lad named John Kilpatrick, residing Wellgate Street, Larkhall, lost his life. He was working the pans when the hopper, with about two tons of material in it, came away from its fixings and fell upon him. He was speedily extricated, but when found life was extinct.

Below – 1896 – Merryton Colliery. Possible location for the brickworks. 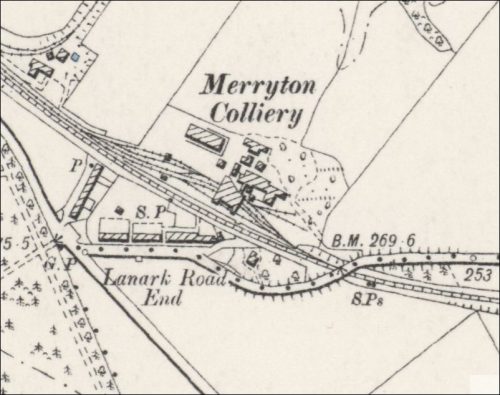 19/02/1897 – Hamilton Herald – Patrick O’Connell, William Wright, James Brogan, John Mulroy, labourers with no fixed residence, pled guilty to sleeping in a brick kiln at Merryton without permission. The first three were each fined 10s or 7 days and the last was dismissed with an admonition.

27/12/1905 – Hamilton Herald – John Burns, John Thomson, Thomas Smith and Frank Murray a quartette of homeless labourers, were each fined 7s 6d, with the alternative of five days imprisonment for lodging without permission in the Merryton Brickworks, Ferniegair, on Sunday morning.