29/01/1894 – Glasgow Herald – Foreman (Savvy) wanted for clay hole or will be quite willing to contract per 1000. Apply Eastfield Brickworks, Fauldhouse. 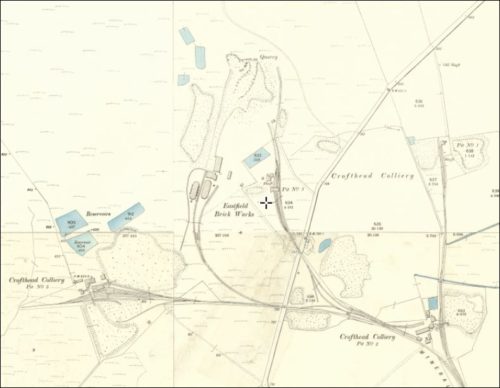 12/08/1899 – West Lothian – Linlithgow JP Court. Wm Clark and John Owens were charged with having on 7th August lodged in a kiln at Eastfield Brickworks, Whitburn occupied by Turners Limited without having received the permission of the owners or the manager. They pleaded guilty and were each fined £1 or 14 days.

19/05/1905 – West Lothian Courier – John Connolly and Hugh Gallacher, labourers were brought up in custody and charged with having, (1) on 6th May from the haulage engine-house at Eastfield Quarry occupied by Turners Limited, stolen three screw nut-keys and a hammer: and. (2), at the machine-shed at Eastfield Brickworks, stolen two screw-nuts and a bush cover, and attempted to steal five brass bushes. They pleaded guilty and were each sentenced to 14 days imprisonment to date from the 8th of May, the date of their apprehension.

12/10/1906 – West Lothian Courier – Brickworks stopped. Last Saturday brickmaking operations ceased in the Fauldhouse district, when the brickwork, at East Benhar, owned by Turners, Limited, was shut down and the hands paid off. Brickmaking in the district first began at the Eastleld Brickwork, and then operations were extended and a new work opened at East Benhar. Some years ago it was found necessary to stop the Eastfield Brickwork and now the one at Benhar has followed suit, and this industry is finished at Fauldhouse in the meantime at any rate.

Below – 25/07/1908 – The Scotsman – Dismantlement sale. Falahill Brickworks and Quarry and Braehead and Eastfield Quarries situated at Fauldhouse for sale … 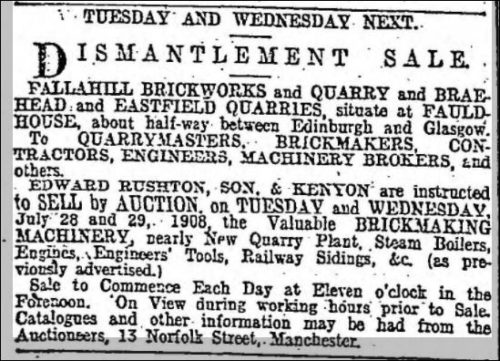 08/08/1908 – Midlothian Advertiser – A sale by auction took place at Braehead, Fallahill and Eastfield Quarries and Brickworks, the property of Turner’s Limited. The stock consisted of brickmaking machinery, quarrying plant, steam boilers, engines, engineers tools, railway sidings, bricks and other effects, which were speedily bought up. The auctioneers were Edward Rushton, Son & Kenyon, Manchester. The sale having been advertised in some of the English papers a goodly number were present from several of the English towns eager to secure bargains. All has to be cleared off the ground by 1st September.