(Note – SBH – On the Scottish OS maps, there are 2 brickworks detailed – Garscube Brick and Tile Works and Garscube Brickworks. Both are depicted on the bottom of the 1896 map. The Garscube Brickworks which is the further east of the two is close to Dawsholm. I believe this was also known as the Garscube Brick Company. The westerly works were run by Mark Hurll. However, when researching it is often difficult to decide which Garscube works a piece of information relates to, so both the relevant pages on my website should be read together just in case information has been erroneously placed. Garcsube Brickworks).

03/06/1893 – Glasgow Herald – Joint-stock company registered in Edinburgh last week – The Garscube Brick Company Limited, established with a capital of £10,000 divided into 9900 preference shares of £1 each and 100 ordinary shares of £1 each, to take over the lease of certain ground and blae heaps at Dawsholme, Renfrewshire and carry on the business of brick manufacturers etc. The registered office is situated at No 82 Gordon Street, Glasgow.

18/10/1893 – Glasgow Herald – Macgregor V Hurll. Issues were ordered in an action by James McGregor, brickmaker, Blairdardie, Bearsden against Mark Hurll, brick manufacturer, 293 Bath Street, Glasgow. The pursuer sues for £5000 or otherwise for £210 in respect of injuries sustained on 27th January last while working in the defender’s employment in Garscube Brickworks. He was at the time working at the removal of a bing of coal blaze when a mass of the material fell upon him. The work, he states, was dangerous and the workmen were not sufficiently protected. The defender denies liability. 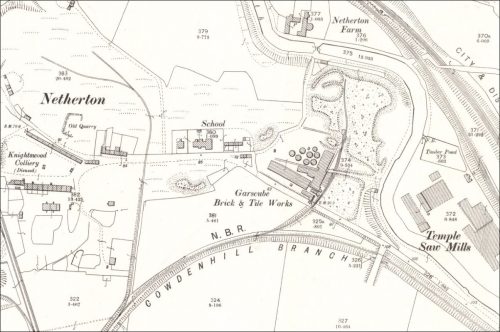 17/11/1905 – Milngavie and Bearsden Herald – Public enquiry. Before Sheriff Blair, at Dumbarton. on Friday. a public inquiry was held concerning the death of John Ferguson, aged 28, residing at 6 Maclean St., Temple, who was killed while following his employment as an engineman in the Garscube Brickworks. A jury having been empanelled, the principal witness called was Johnstone Mackay, who examined by the Fiscal stated that he resided at Kelllvindale Road Maryhill, that he was employed at Garscube Brickworks, near Temple, and that he was engaged with the deceased in the engine-room of the works about 11.30 on the forenoon of Wednesday, the 1st instant. The deceased was engaged cleaning the overhead driving shaft when something went wrong, and he observed Ferguson being carried round the shaft at great speed. He had the machinery stopped at once. The unfortunate man was taken down and expired about fifteen minutes afterwards. His head was considerably injured. An agent in the interests of the Factory Act rose to put a question to the witness, whereupon a writer representing the firm tendered an objection. The Sheriff pointed out that the agent for the Factory Act was quite at liberty to inquire whether the requisite precautions had been taken to guard the machinery. In reply to the agent, the witness stated that the shaft was about 8ft from the ground. There was nothing in the way of a cover upon it owing to the fact that it was an overhead shaft. George Easton, the works’ engineer, corroborated. Constable Mackay spoke to having seen the body of the deceased immediately after the accident. It was examined by Dr Hay of Temple. The witness believed that the man’s injuries were quite sufficient to cause death. The skull of the unfortunate man had been smashed. The jury returned a verdict of accidental death. 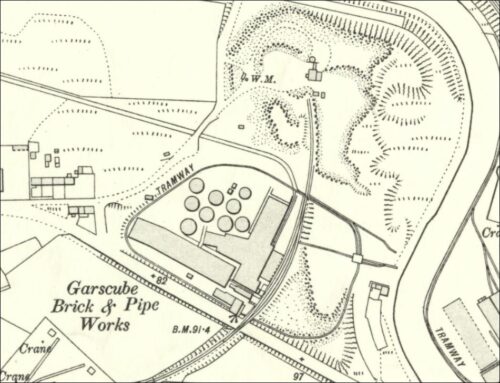 27/11/1914 – Milngavie and Bearsden Herald – Lawrence Murray and James Dunlop were charged with maliciously uncoupling a truck and attempting to cause damage or obstruction on the private railway on Garscube Brickworks off Netherton Road, 17th inst. Both pleaded guilty and were fined 10s 6d or 7-days’ imprisonment.

c. 1930 – Kenneth Sanderson states in his book The Scottish Refractory Industry 1830 – 1980 – “Hurll owned building brickworks and associated clay pits at Garscube, Maryhill, Knightswood, Yoker and Garscadden, all in the Glasgow area. Garscube made sewage pipes on an early Pullen and Mann machine, using fireclays sent from Glenboig. The British Clayworker Magazine of November 1984 reported the discovery of a blue Staffordshire type of clay in the Carluke area, Lanarkshire, which was also used at Garscube for a period. The Garscube and Knightswood Works had closed by the early 1930s but the Garscadden Works continued until 1948 when it was leased to Keir and Cawder”