27/09/1864 – Greenock Advertiser – Advertisement: Wanted to rent or purchase in the town of Greenock, an enclosed piece of ground, that will contain shout one hundred thousand bricks, or piece of ground that can be easily enclosed by a pailing or otherwise. For the convenience of builders, stones and bricks from Garscube Quarry will be sold in Greenock and Port-Glasgow, at the same rate as at the quarry and brick kilns, with the addition of freight only. Expert orders are executed on the shortest notice. An agent will shortly be required to make sales. Garscube Quarry. (Reprinted from the Greenock Advertiser 16th Nov. 1811)

c. 1866 – The 1985 publication ‘A survey of Scottish brickmarks’ suggests that McIntyre, Thomsan (Thomson?) and Boyd were involved with the company around this time.

Below – 1893 – Garscube Brickworks aka Dawsholm Brickworks. 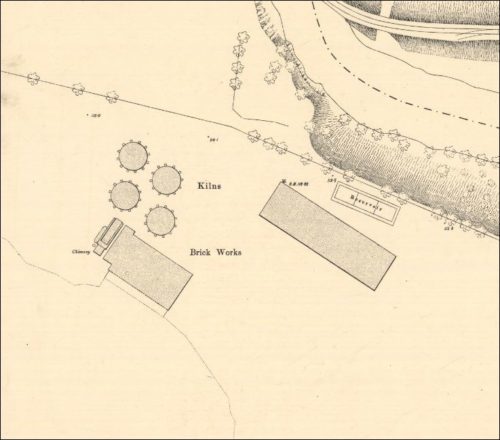 Below – 1896 – Garscube Brickworks aka Dawsholm Brickworks. 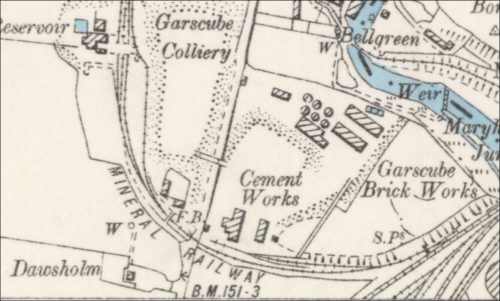 11/03/1897 – Glasgow Herald – Appeal – The Garscube Brick Company Limited V John Murray (Jun). Counsel were heard today and judgment given in an appeal by the Garscube Brick Company (Limited) against the decision of Sheriff-Substitute Strachan, affirmed on appeal by Sheriff Berry, allowing the defender, John Murray Jun., a reduction of £20 from an account for bricks supplied, on the ground that the pursuers had committed a breach of contract in failing to supply the bricks as required. The Lord-President, in delivering the leading opinion, said that the pursuers had never failed to supply the bricks when a reasonable notice was given and that the breach of contract really lay with the defender. The Division, therefore, reversed the finding of the Sheriff and gave a decree in favour of the appellants.

04/11/1904 – Milngavie and Bearsden Herald – Found dead. Last Sunday morning Thomas McGinlay, the night fireman at Garscube Brickworks, Dawsholm, found the body of a man named John Fleming (47), a labourer, 2 Waters Street, Maryhill, in an empty kiln there. It is stated that the deceased, who was employed at the works, visited the place late on Saturday night, and lay down in one of the kilns, where he was seen several times during the night by the fireman. A small bottle containing laudanum was found in his possession, together with a letter addressed to a gentleman, directing him to identify the body and take charge of the remains. The body was examined by Dr Robertson, Milngavie, who certified death as being due to suffocation. The body was afterwards removed to Bearsden Police Mortuary.

19/10/1906 – Milngavie and Bearsden Herald – Trespassing. At Dumbarton Justice of Peace Court, before Justice of Peace Henderson, on Thursday, 11th inst., Michael Cussick, labourer; Wm Marshall, shoemaker and Hugh Campbell, labourer, all of Maryliill, were charged with trespassing at Dawsholm Brickworks. The accused on promising not to repeat the offence were admonished and dismissed.