John Paterson, brickmakers and building contractors was founded around 1865, by John Paterson, the son of a stonemason. The business became John Paterson & Son in the mid-1880s when John Paterson Junior (c. 1873–1931) joined the firm. Over the next three decades, they became increasingly active in brickmaking, acquiring Nursery, Sheepmount, Caledonian and Temple Brickworks, all on the south side of Glasgow. (Southside?). The Patersons based themselves at several addresses around Polmadie and Pollokshaws Roads for most of their existence.

The firm became a limited company in 1891 with a share capital of £40,000. Having decided to concentrate on brickmaking, the company sold off their electric winches, steam cranes, lathes, theodolites, and other builders’ plant in 1913. Their brick kilns in Polmadie Road were still active in 1939.  The firm ceased operations in 1963. – source

The 1985 publication ‘A survey of Scottish Brickmarks’ suggests that the Temple Brickworks off Crow Road, Glasgow were ‘probably Woodend Brickfield‘

(Note – SBH – I do not believe that the Temple Brickworks and the Woodend Brickworks were the same brickworks. From the NLS maps they are both positioned off Crow Road but a fair distance apart. Thomas Leslie was definitely associated with the Woodend site. I do not know William Hindspath unless it is a corruption of William Gilchrist who also operated the Woodend Brickworks. I have noted the above here in case further research makes teh information clearer).

22/12/1898 – Glasgow Herald – Fire at the Temple Brickworks – The Glasgow fire brigade was called out yesterday evening to the Temple Brick Works on the South Bank of the Forth and Clyde Canal to the west of the village of Temple. Detachments were sent on from Hillhead and Northern Stations. The fire had broken out in a two-storey brick building, 36 feet by 21 feet used as an office, engineers store and oil store. A supply of water was drawn from the canal by the steam fire engine. The buildings and contents were considerably damaged. The loss is estimated at about £350.

21/07/1905 – Milngavie and Bearsden Herald – Accident. On Tuesday about one o’clock, Charles Nicol McIthon, engineman, residing at 18 Norman Street, Bridgeton, Glasgow was descending a stair from a ‘Hoffmann’ kiln at Temple Brick Works, Temple when his foot slipped on the second step and he fell heavily about 14 feet, alighting on his right knee on the under step, fracturing his knee. He was examined by Dr John G. McColl Maryhill, who ordered his removal to the Western Infirmary.

04/10/1907 – Milngavie and Bearsden Herald – On Sunday afternoon, while John Ward (10),  schoolboy, and residing with his parents at 8 Canning Street, Anderston, Glasgow, was amusing himself along with three others climbing up and down the steps of the leg of a steam crane situated at Temple Brickworks, and when fully halfway up the leg, he missed his footing and overbalancing himself and fell about twelve feet on to the ground, alighting on to his head and sustaining severe injuries. The local police had the boy removed to the Western Infirmary for treatment, where he was detained.

23/10/1908 – Milngavie and Bearsden Herald – About 10 a.m. on Monday last there was observed floating in the disused old quarry hole within Temple Brickworks the body of a man. It was brought ashore by Thomas Doyle, who has charge of the rubbish coup for which this quarry hole is now used for. The police were at once informed and they had the body removed to the mortuary at Bearsden for identity. It appears to be that of a man from 30 to 35 years of age, with blue a serge jacket and trousers on and seemed to have been fully two weeks in the water. It is supposed that the deceased, who seemed of the tramp class, had wandered into the hole when making his way to the brickworks for a night’s shelter and been drowned. 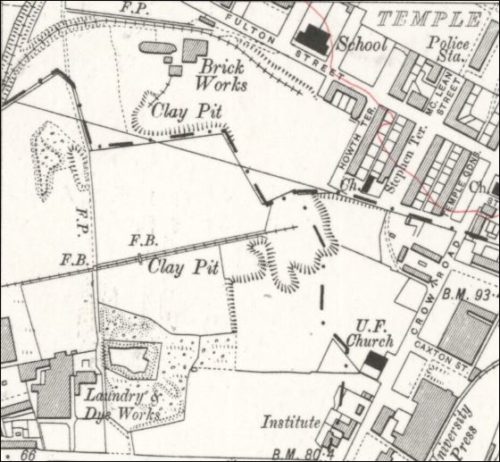 26/04/1912 – Milngavie and Bearsden Herald – John White, 66 years, night watchman, residing at 45 McNeil Street, Glasgow was on Thursday, 18th inst, charged in the Sheriff Court, Dumbarton with having on the night of Saturday 6th April, culpably and recklessly set on fire a wooden office at Temple Brickworks (John Paterson & Sons Ltd) there which was completely burned to the ground. The accused denied the charge but was convicted on evidence being led and Hon Sheriff Henderson continued the case for 3 months for sentence.

21/02/1913 – Milngavie and Bearsden Herald – Clearance sale. On Thursday last, at Temple Brickworks, the machinery, plant, railway siding, brick buildings, stalk, erections etc were sold off on the instructions of the trustees for the late Mr John Paterson.