Gilchrist and Goldie’s Woodend Brickwork – The main brickworks building stood on the west side of Crow Road just north of what is now Southbrae Drive but they also needed large areas of land nearby in order to dry their bricks on huge tables. Part of their area extended to a large field on the opposite side of Crow Road. In 1869 there were no railway lines in the Jordanhill area but shortly afterwards North British Railway Company bought part of the brickworks site to build the 24 feet high embankment to carry the line between Hyndland and Anniesland. Although this area had once belonged to the Jordanhill Estate it had been sold to the Oswalds of Scotstoun and there was also an abandoned ironstone pit within the brickworks boundary. The presence of that pit meant that there was also a ready supply of bing material for brickmaking.

The works produced around 2 million bricks per annum and many of them were used to build the houses on the east side of Crow Road.

The Woodend Brickfield supplied building bricks for a series of cottages on Crow Road, built c.1885 for Scotstoun Estate.

Houses in King Edward Road, Milner Road and Selborne Road are known to be affected by settlement. It is generally assumed that the terrace of houses on the north side of Southbrae Drive between Crow Road and King Edward Road are badly affected by mine workings and many of the lintels above the doors and windows are no longer horizontal. The houses at the King Edward Road end of that terrace settled so badly many years ago that they had to be demolished and a new block of flats has since been built in their place. However, Glasgow City Council geologists have stated that the settlement in this area is due to poor consolidation of fill material used to replace ground excavated in association with the local brick works in Crow Road and is not the fault of mine workings.

The 1985 publication ‘A survey of Scottish Brickmarks’ suggests that the Temple Brickworks off Crow Road, Glasgow were ‘probably Woodend Brickfield’.

(Note – SBH – I do not believe that the Temple Brickworks and the Woodend Brickworks were the same brickworks. From the NLS maps they are both positioned off Crow Road but a fair distance apart. Thomas Leslie was definitely associated with the Woodend site. I do not know William Hindspath unless it is a corruption of William Gilchrist who also operated the Woodend Brickworks. I have noted the above here in case further research makes teh information clearer).

Below – c. 1885 – NMRS – The Woodfield Brickfield supplied building bricks for a series of cottages on Crow Road, built c. 1885 for Scotstoun Estate … 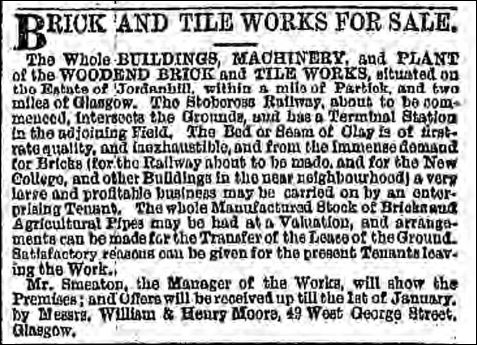 Below – 26/12/1866 – North British Agriculturist – Wood-End and Skaterigg Brick and Tile Works and Claythorne Brick, Tile and Pipe Works. Glasgow, Crow Road, Partick 1866. Messrs Dods and Co having relinquished business and disposed of the former of these works on the 26th day of April last and Mr R. W. Dods having retired from the latter and since the 23rd of the same month ceased to have any connection whatever therewith, it is hereby intimated that the two works have been united under the sole agency and management of Mr Thomas Leslie. They thus constitute one of the most extensive brick and tile works in the West of Scotland and being situated close to the River Clyde and Harbour of Glasgow and in the immediate proximity to Temple Lock on the Bowling Canal and to a siding of the North British Railway, they possess unequalled facilities for shipment in every direction. An abundant stock of brick, tiles and drain pipes of all sizes is constantly kept and careful and prompt attention is paid to all orders. It is requested that communications be addressed to Mr Leslie, Wood-End and Skaterigg Works, Crow Road Partick who will be glad to supply price lists and any desired attention. N.B – Orders for fire clay goods attended to. It is in contemplation to establish a common clay pottery in connection with these works in the ensuing spring. 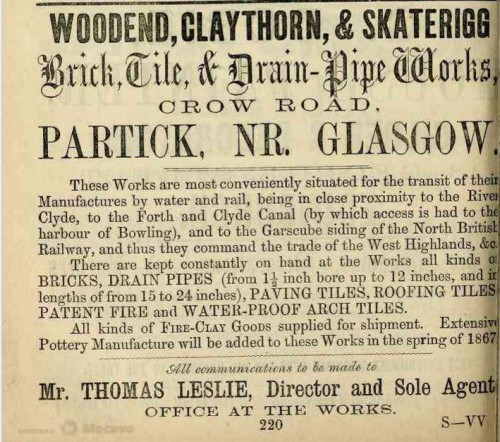 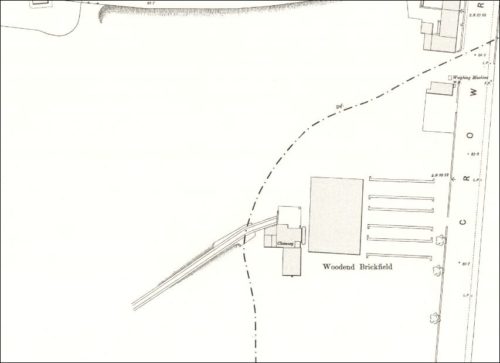 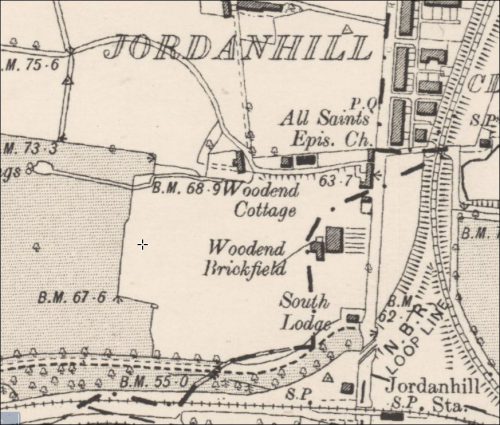 Below – Taken in the 1890s. The men are standing in the gap which led to what is now Woodend Drive and the sign on the extreme right edge advertises the services for All Saints Church.   The high building on the left was the Woodend Brickworks and the men are standing beside the old smithy. 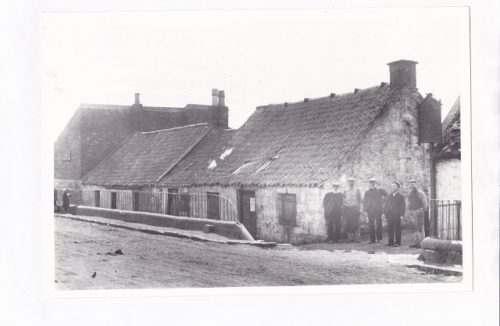 Below – This is Woodend Cottage around 1900 and was the house for the manager of the local brickworks. The house was demolished to provide a site for Jordanhill Parish Church which was built in 1904. 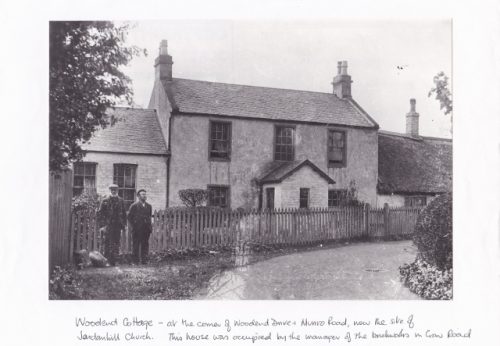 … The Woodend Brickfield supplied building bricks for a series of cottages on Crow Road, built c 1885 for Scotstoun Estate. Though the cottages on Crow Road are often referred to as colliery cottages they have had very little to do with the mines. The colliery rows proper have long disappeared and consisted of Blue Row, Red Town, Skaterigg, the Double and Stores Row. The Blue Row was so named from the blue tiles on its walls … source p 33