Below – 22/05/1799 – Caledonian Mercury – Barrowfield Estate near Glasgow to be sold. Belonging to the sequestrated estates of James Dunlop, late of Garnkirk. Reference to the rental value of the ‘brickfields’. 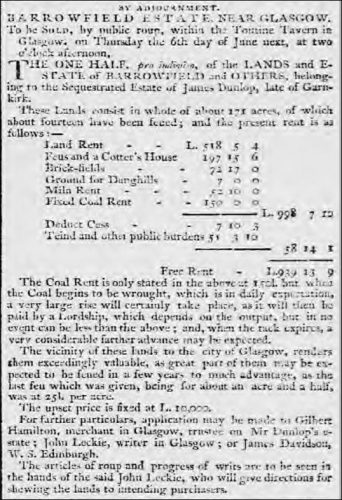 31/03/1860 – Glasgow Free Press – Dean of Guild Court – On Friday at this court, the following petitions were granted … Jas Shearer, fire brick maker, Glasgow and Mr Joseph McNish, draper, Rutherglen to erect a fire brick manufactory, and a tenement of dwelling houses of two storeys on the south side of Camlachie or Borrowfield Burn.

05/08/1861 – Glasgow Herald – Notice to Creditors – Messrs Shearer & McNish, fire brick manufacturers, Crownpoint Street, Barrowfield, of Glasgow, and Joseph McNish, fire-brick manufacturer there, the sole individual partner of said firm, as a partner thereof, and as an individual, having, on the twenty-fourth day of July current, executed a trust disposition and assignation of their whole estate and effects in favour of trustees, for behoof of their creditors, all parties having claims against the insolvents are requested to lodge statements thereof, with declarations of verity thereto, with the subscribers, factors for the trustees, as or before the fifteenth day of August next; and the creditors are likewise required, within the same period, to subscribe the deed of accession to said trust disposition, which lies in the subscribers’ hands; certifying to such as failing to do so, that they may be excluded from participating in the fends to be thereafter divided. Reid and Galt, Accountants, 8 Prince’s Square, Glasgow, 26th July 1861 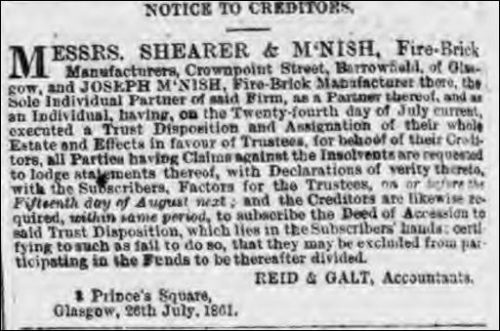