14/03/1851 – Glasgow Herald – For Sale – Building materials, high-pressure steam engine about 6hp with steam boiler etc at Bothwell Tileworks; 70,000 bricks, 13,000 house tiles with couples, rafters and beams; and upwards of a thousand linear yards of sarking 14″ broad and 5/8″ thick, and dwelling houses with a with number of articles connected with the tile work; the whole nearly as good as new. Also a quantity of drain tiles of different sizes. For particulars apply at the works or to M. J Adam, 206 Duke Street, Glasgow. (Note – SBH – This early tileworks may be a different site from the Bothwell Park Brickworks).

Below – 1896 – Adverts for James and Archibald King, Bothwell Park Quarries.

29/04/1898 – Hamilton Herald – Bothwell Park Quarries and Brickworks are about to be converted into a limited liability company, with a capital of £25,000. As these undertakings have been very successful in the past the likelihood is that there will be a large number of applications for shares. 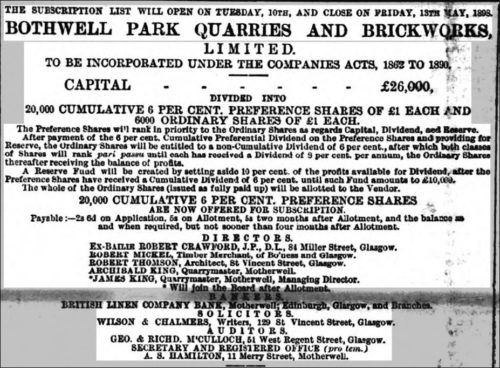 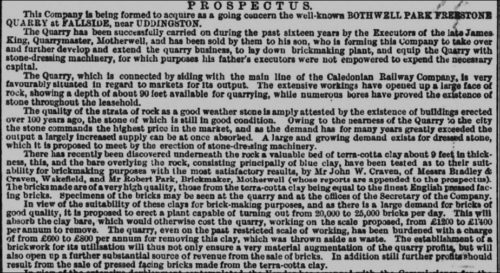 13/05/1898 – Hamilton Herald –  A new industry is about to be formed in our midst which should put a little more life and work into the village. In the vicinity of View Park is a large stone quarry which has been formed into a Limited Company, and has been designated Bothwell Park Quarries and Brick Works. From this, it will be seen that the manufacture of bricks, always a useful commodity in the building trade, is about to take some practical form. Brick during the past five years or so is largely taking the place of stone, and will probably become the building material of the future. The creation of these works will give employment to several hundred people, amongst whom the members of the fair sex are likely to gain a first place, as in most brickworks female labour is nowadays superseding the male worker. The plant to be erected will be capable of turning out from 20,000 to 25,000 bricks daily.

21/05/1898 – Linlithgowshire Gazette – Letters of allotment have now been issued to the shareholders of the Bothwell Park Quarries and Brickworks, of which company Bailie Mickel of Bonnytoun is a director.

28/04/1899 – Motherwell Times – Quarrymens wages advanced. A meeting of the Scottish Quarrymen’s Union, Fallside Branch No.9, was held the other evening when it was resolved to approach the masters and seek an increase of wages, and deputations were appointed for the purpose. A reply has now received from Mr King, Bothwell Park Quarries and Brickwork, Limited, conceding the men’s demands, and from 1st May the quarrymen’s wages there will be 7d per hour and those of the crane men 30s per week, an advance of 2s.

22/01/1900 – The Scotsman – Bothwell Park Quarries and Brickworks Limited having had before them the accounts for the half-year to 31 st December 1899 have resolved to pay an interim dividend on the preference shares at the rate of 6 per cent per annum, free of income tax. The dividend warrants have accordingly been posted. 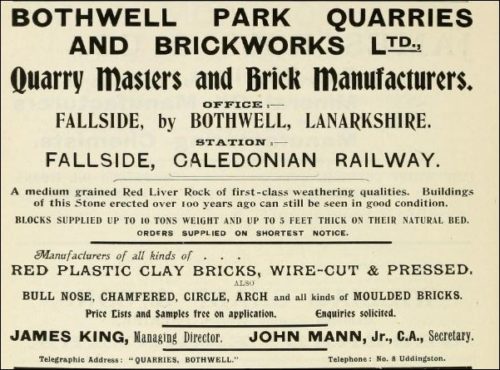 30/09/1904 – The Scotsman – Bothwell Park Quarries & Brickworks. The annual general meeting of the shareholders of the Bothwell Park Quarries and Brickworks (Limited) was held at the registered office of the Company, 142 St Vincent Street, Glasgow, on 28th, when the annual reports and balance-sheet, along with the auditors report, were submitted and approved. After carrying over £700 to depreciation and reserve accounts, a dividend at the rate of 6 per cent. per annum, free of income tax was declared on the cumulative preference shares.

29/03/1907 – Bellshill Speaker – Accident. On the afternoon of Friday last, Peter McIntyre, a lad of 16 and employed at Bothwell Park Brickworks, Fallside, met with an accident whereby he lost his right arm. He had been climbing on the brick-making machine missed his footing and in trying to save himself he put out his right hand which was caught between two pinion wheels, the result being that he was severely crushed. He was medically attended to by Dr McPherson, Bothwell, who ordered his removal to the Royal Infirmary, where it was found necessary to amputate the arm the elbow point. The injured lad resided Watson Street, Uddingston. 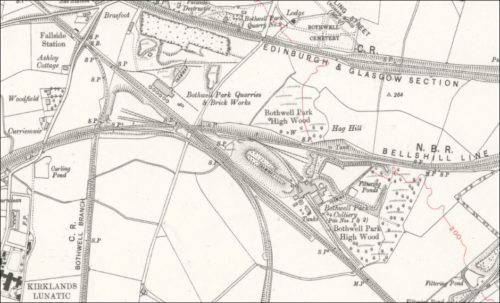 01/06/1912 – Coatbridge Leader – Disputed accountancy. In Airdrie Small Debt Court on Tuesday, before Sheriff Glegg, an action was brought by the Bothwell Park Quarries and Brick Works Co., Ltd., against Messrs Loudon & Inglis, builders, Whifflet. The action was for payment of the balance of an account. Mr Sharp, from the office of Messrs Andrew & Gray, solicitors, said the defence was that all the bricks received were paid for and that in each of the four waggons there were 300 bricks short, which accounted for the sum sued for. The case was continued for a fortnight for proof.

01/11/1912 – Motherwell Times –  Bailie McKendrick gives a statement on the contracts to build the new poorhouse. ” … Bailie McKendrick said he held in his hand an excerpt of the minute of the Dalziel Parish Council showing they agreed to get the best brick in the market, namely Thomas King & Coy’s, Bellside for the facing bricks and Bothwell Park wire cut brick for the inside brick.  That was settled by the Parish Council and no other bricks were introduced into the building. He thought he opponent must have had a dream and he could unravel the dream for him, because in connection with the new burgh stables when they were being built, the Burgh engineer stipulated for the best-pressed brick outside and the No 1 quality white enamel brick for the inside.  This was going to make a very expensive building and when the offers were received, he ( Bailie McKendrick ) was one of those who protested against the amount of money being spent and a small committee of 3 was appointed to try and reduce the price. He (Bailie McKendrick ) was 1 of the 3  and instead of the pressed brick they get wire cut clay brick and No 2 quality white enamel brick for inside …

04/11/1916 – Womans Dreadnought – Mr Anderson stated that twenty women employed by the Bothwell Park Quarry and Brickwork, Ltd., Fallside, Lancashire, were paid 14s 3d per week, plus 1s 3d bonus “dependent upon good time-keeping”  they were charged with striking and fined. Mr Primrose was ignorant of the matter.

21/09/1923 – Dundee Courier – Finest red brick dust. Unequalled for quality and colour for top finishing tennis courts. 27s 6d per ton f.o.r Fallside. These are the finest materials in the market and cannot be equalled. Samples and railway rates free on application to Bothwell Park Quarries and Brickworks Ltd, Fallside, Bothwell.

18/09/1900 – North British Daily Mail – Bothwell Park Quarries & Brickworks Ltd. The annual meeting was held yesterday. Ex-Bailie Crawford, the chairman, presiding. The report and accounts were adopted and a dividend at 6 per cent per annum, free of income tax declared upon both the preference and ordinary shares, leaving to he carried forward to next year £295 17s 8d after providing for depreciation and reserve. The retiring directors, Messrs Robert Mickel and Robert Thomson were re-elected. Mr John Barr, Harburn, West Calder was added to the board and the auditor Messrs G. & R. McCulloch were reappointed. 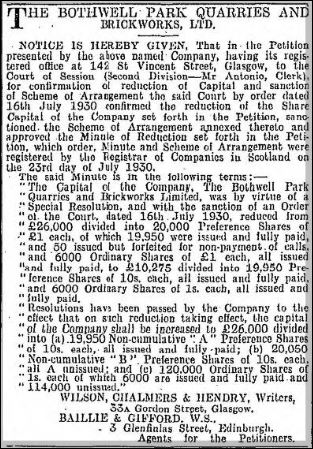 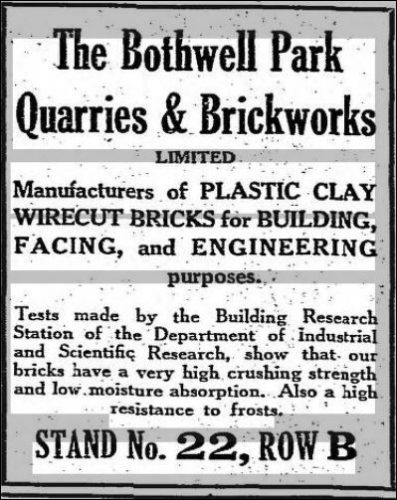 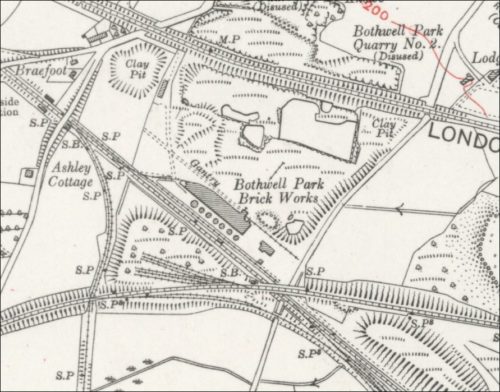 20/09/1935 – Bellshill Speaker – Removal recommended. Mr McCracken said that instead of trying to beautify the bings which were not only blots on the landscape but a source of annoyance to large numbers of people in that district, they should write to the Commissioner recommending their removal. At Bothwell Park, there were two huge bings and within three hundred yards there was a huge excavation from which clay had been taken for brick making and which was full of water and a danger to the whole district. Why he asked, should not some of the unemployed be engaged to fill up that hole from those bings? There were, he added, in connection with this question, various schemes that could put into operation.

13/09/1937 – The Scotsman – William Baird & Co (Ltd), coalmasters, have agreed to cease dumping inflammable material on the debris bing at Bothwell Castle Colliery in consequence of protests by Lanark County Council on the smoke nuisance. The Company, in a letter to the Council state that arrangements have now been made with the Bothwell Park Quarries and Brickworks (Ltd) for depositing the debris in the quarry at Bothwell Park.

22/09/1939 – Bellshill Speaker – For some time now the practice of swimming and playing around Bothwellpark Quarry, Fallside has caused anxiety to the police, residents and owners alike. This quarry, the property of Scottish Bricks Ltd., is at one part very deep. It is filled with stagnant water. In spite of the fact that the quarry Is surrounded by barbed wire and a notice intimating that trespassers will be prosecuted is displayed, boys persist in utilising the quarry as a swimming pool. The owners, stated the fiscal, are anxious that no accident should occur on their property. Thus the fiscal viewed seriously the offence of four lads who had trespassed on the land. They were discovered by police. It was obvious that teh boys had been swimming. Only two of the boys appeared in person. One other was represented by his father. The fourth was now serving in His Majesty’s Forces. It was pointed out by the prosecuting fiscal that these boys and others like them, were setting an extremely bad example to younger lads who perhaps were unable to swim. The accused were admonished.

23/06/1944 – Motherwell Times – Quarry hole rescue. Boys before JP Court – The story was told at Bellshill Juvenile Court on Tuesday how on the evening of April 26 last, two members of the Lanarkshire Constabulary found six boys playing at the water’s edge at Bothwellpark Brickworks quarry. The alarm was given and three of the boys managed to climb to safety. The other three were quite unable to climb the steep precipice and measures had to be taken to rescue them. A long rope was procured at the brickworks office and a noose was made on it so that it could fit around a boy’s body. Each of the three boys was rescued in this way, one after the other. At the Juvenile Court on Tuesday two of the boys pleaded not guilty to a charge of descending the quarry and playing at the water’s edge whereby they endangered themselves. The boys were found guilty after proof and were fined in 5/- each.

05/12/1952 – Motherwell Times – County Council members have made a visit of inspection of the quarry at Old Kirk Road, Bothwellpark, and discussed the alleged dangerous condition with a director of Scottish Bricks  Ltd., the owners. The fence being repaired and re-erected where necessary and the director gave an assurance that he would do everything possible to expedite infilling with the firm’s own waste material. They would also give facilities to others to tip suitable material.

11/09/1953 – Motherwell Times – Crushed to death. A 48-year-old digger-driver, Samuel Neil, 1 Oakbank Drive, Airdrie, was killed instantaneously at midday on Monday when he was crushed by fall of clay while working at the rear of the mechanical digger he had been operating. The fatality occurred in the Hagg Hill field occupied by Scottish Bricks Ltd., Bothwellhaugh Brickworks, Bellshill, and the rock and clay fell 15 feet.

30/07/1954 – West Lothian Courier –  Article on the death of Mr Thomas Mickel, 43 Craigmillar Place Edinburgh on 19/07/1954, aged 90 years … on retiral he retained several business interests and was a director of Scottish Bricks Ltd …