Researching through the old newspapers there are several references to brickworks being located in the South Leith Links area of Edinburgh around the late 18th century. The locations are often vague and difficult to pinpoint. All such references are detailed below. It is appreciated they may not all refer to the exact same location. Indeed the maps dated 1766, 1817, 1820 and 1822 below each detail a brickfield in the south Leith Links area. It is hard to tell due to the map scales, but these brickworks are all situated very close to one another and indeed they may all be the same works.  There could even be a further brickfield in the nearby Restalrig area. It is also confusing in that some entries appear to be referring to a house known as ‘Brickfield’ as opposed to a brick making site. Later there was a further brickworks located nearby at Hawkhill.

05/08/1761 – Caledonian Mercury – That there is to be set in tack, for such a number of years as shall be agreed upon, from and after Martinmas next. The brick and tile work, lying near to the Church of South Leith. Any person inclining to take the same may apply to Mr Robert Innes, Ship Master in Leith who has the power to conclude a bargain.

Below – 1766 – Brickfield located near Hermitage on the road connecting Leith and Restalrig. 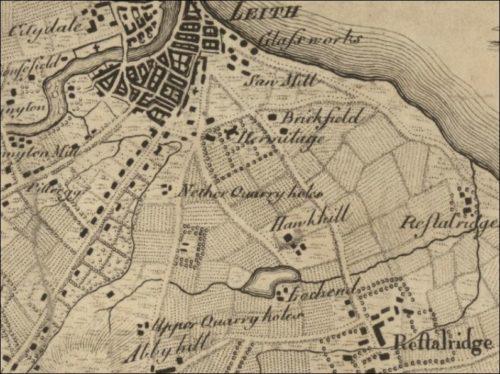 15/05/1775 – Caledonian Mercury – To be let and entered to at Martinmas first. A brick manufacture, that belonged to the late Mr John Innes, bricklayer and now possessed by Deacon Jamieson, (William Jamieson?) mason in Edinburgh, well known for fine hard brick for shipping or outside work. There are four acres of ground and stables, barn and dovecote lying on the road between Restalrig and Leith. For particulars apply to Mrs Innes, Quality Street, Leith or Mr James Greig, writer, Edinburgh.

24/07/1776 – Caledonian Mercury – Brick manufactory to let on tack and entered into at Martinmas 1776 and consisting of 4 acres of ground, a stable for 4 horses, a barn, a dovecote, lying in the road between Restalrig and Leith. This brick kiln is well known for its hard bricks, fit for outside work and is within ten minutes walk of Leith for shipping. It belonged to the late Mr John Innes, mason in Edinburgh and presently occupied by Deacon Jamieson, mason in Edinburgh. 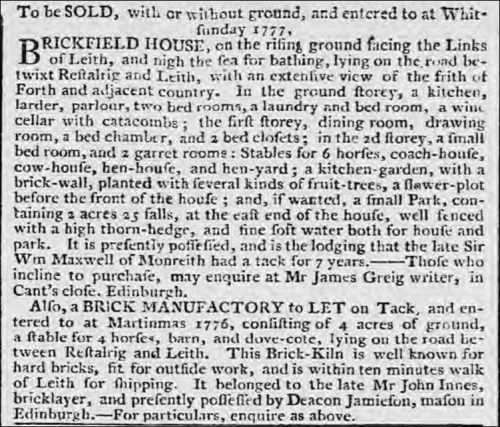 29/04/1780 – Caledonian Mercury – Tradesmen. Wanted immediately, two tradesmen, the one, a house carpenter and wheel-wright the other a mason – to go to Jamaica. Good encouragement will be given. For particulars apply to Mr Gilbert Grierson at Brickfield near Leith. Not to be repeated.

06/05/1786 – Caledonian Mercury – Flour millstones – To be sold by James Whyte, at the Marble Work, Leith. Several pairs of the best burr stones of all sizes from 4 to 5 feet over, warranted good. NB. Informs his friends that his brickworks will be open for delivering of bricks on the 10th instant. Orders, as usual, taken at his Marble Work, Leith.

26/11/1787 – Caledonian Mercury – A letter to the editor about the proposed extension to Leith harbour … The soil from the Black Rocks to Brickfield is a solid clay — lt is the fame from Leith to Newhaven. It is, therefore, highly probable, that, at the depth that it would be necessary to dig the new harbour, a bed of clay will be found. This point might be ascertained beyond a doubt, at the expense of a few pounds, by causing pits to be dug in different places. At any rate, the present jetty or pier of South Leith Harbour appears to have no foundation but sand, and, it is evident, has much severer shocks to withstand than a pier or facing of a wet dock, which is supported on one side by earth at its back, and against which the water acts with little or no violence. If a body of clay is found there, another objection may be obviated, viz- What is to be done with the excavated matter? The vicinity and cheapness of coal would render the making of bricks a desirable object, a considerable sale for which would be secured in the erection of warehouses and other buildings upon the quays; the rest, if properly made, would have an equal chance with those manufactured in the neighbourhood of this city; it would even be the interest of the Magistrates to grant the undertaker some advantages to enable him to sell his bricks on better terms than usual …

30/04/1789 – Caledonian Mercury – Summer or bathing quarter. A house at Brickfield near Leith, consisting of four rooms, closets &c with a stable and small plot of ground. Enquire at Alexander Alison, accountant St James’s Street. Not to be repeated.

14/01/1790 – Caledonian Mercury – To be sold by public roup, on Wednesday the  10th of February 1790, within the Old Exchange Coffee House, Edinburgh, betwixt the hours of six and seven afternoon.  The houses and gardens belonging to the Earl of Lauderdale, on the south side of Leith Links, consisting of an extremely good house, very pleasantly situated, and commanding and agreeable prospect, and a garden, coach house, and stables, &c.

As also, the two houses, one of whereof is very good, and two gardens, presently possessed by Alexander Marr, at the yearly rent of 281 sterling; at which sum they were let on a lease for 19 years, which expired at Martinmas 1787, so that a considerable rise of rent may now be expected.  In the upper garden, there is about an acre of extreme good deep clay, fit for making brick unopened.  The servant will show the principle house every Friday, between twelve and two o’clock afternoon; and Alexander Marr the other subjects at any time.  The articles of roup and progress of writs are to be seen in the hands of Allan Macdougall, writer to the signet.

30/01/1797 – Caledonian Mercury – To be sold … Those lands, part of the Barony of Restalrig called Dudgeon Bog or Dudgeon Park consisting of 6 acres, 1 rood and 3 1/2/ falls Scots measure, of excellent soil and well enclosed with thriving hedges, lying south-east from Mrs Innes’ house of Brickfield immediately adjoining to the Links of Leith … there is a good stone quarry in the immediate vicinity and the lands abound with fine clay for making bricks, fit either for building houses or other purposes … (Note  – SBH – on the 1817 map to the middle right (along the map fold) there is a property belonging to Mr Dudgeon. He may, of course, have owned much more land than this prior to 1817) 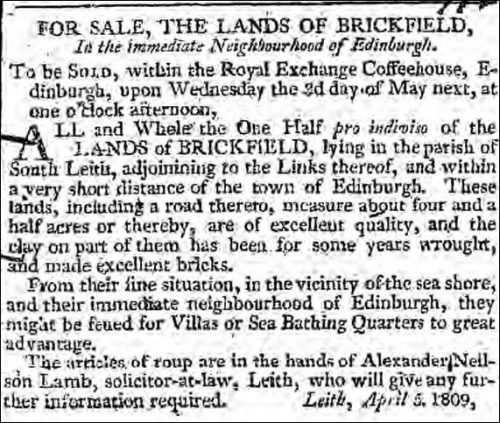 Below – 22/03/1813 – Caledonian Mercury – Sale of a brickfield near Leith Baths. The sale of these lands is now to take place on Wednesday the 31st current, in the Royal Exchange Coffeehouse, Edinburgh at two o’clock afternoon, in whole or in lots as may be desired. Meantime application may be made to Messrs Lamb and Ross, Shore of Leith or Mr Swinton, W.S Edinburgh. 22/03/1813. (Possibly connected?) 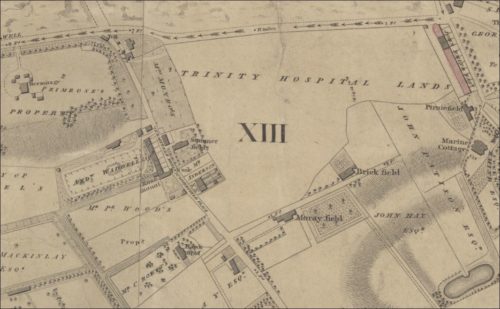 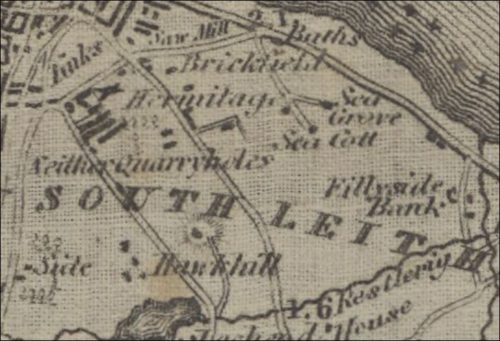 Below – 1822 – Brickfield, Leith. (Note – SBH – I am uncertain whether ‘Brickfield’ is still a working brickworks or the name of a house). 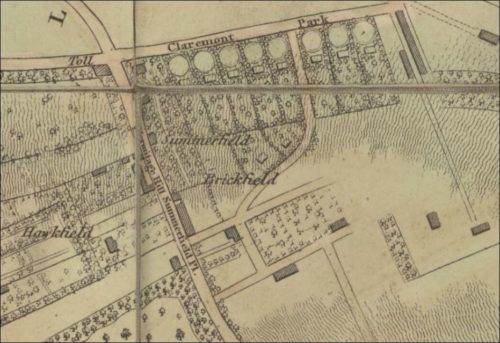 1825 – 1836 – The following details appear in the “List of streets, &c. in Leith and neighbourhood” – Hawkfield alias Brickfield, Restalrig Road.

07/05/1832 – Caledonian Mercury – On Saturday, a large quantity of silver plate was found in a quarry south of Brickfield near Leith by men of the road patrol and safely lodged in the Police Office, Edinburgh.

Below – 1852 – Area of ground between South Leith Free Church and Seafield (Leith?) Baths. Both these locations are mentioned in earlier articles detailed above as being in the vicinity of the unnamed Leith Brickworks.