Please read in conjunction with the entries on the ‘Brickfields, Leith Edinburgh‘ page as it has been difficult to determine from the newspaper articles if they refer to different sites or the same site.

Below – 08/02/1865 – The Scotsman – To brickmakers, builders, slaters and others – sale of stock and plant at Hawkhill, South Leith. (Note – SBH – Although this article refers to Hawkhill, it may be referring to the brickfields as mentioned above). 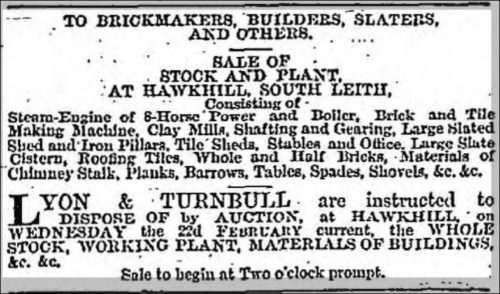 1868 – 1869 – John Dougall, bricklayer and builder, 6 Dougall’s buildings, North Fort Street, Edinburgh. (Note – SBH – No mention of him being a brickmaker at this time).

Below – 1870 – There are no brickworks detailed at Hawkhill?. 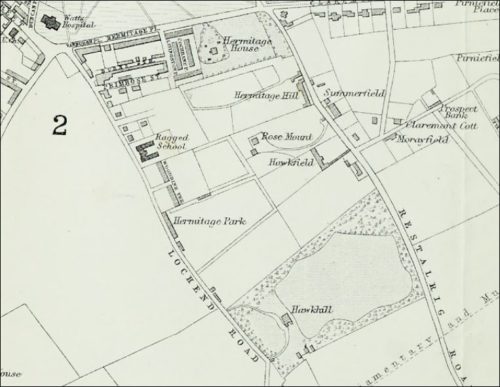 27/02/1871 – Glasgow Herald – Irvine v Field. This is an action of damages at the instance of Alexander Irvine, gardener, against Thomas Field, proprietor of Hawkhill, for illegal ejection from ground on the defender’s estate. The Lord Ordinary (Ormidale) granted an issue for the trial of the cause, and against this interlocutor, the defender reclaimed, on the ground that no relevant ground of damage was stated. He argued that in such an action it was’ necessary that a title of possession should be averred; that here a verbal agreement with the defender’s author, whom he did not represent, was all that was set forth; and that the defender had acted within his legal rights in taking possession of the ground, legal process not being necessary. To-day the Court adhered, holding that the pursuer, having averred that he was in possession on a colourable title, must be allowed an issue. It was observed that a legal warrant was necessary to make it safe for a proprietor to eject one who was not a mere trespasser and that the averment here was sufficient to entitle him to prove his possession.

26/11/1873 – The Scotsman – Hawkhill Brickwork, Lochend, Leith to let for such a term of years as may be agreed upon, within tolls of Edinburgh and Leith. The foreman on the ground will show the property and for particulars apply to Thomas Field, Hawkhill, Leith …

05/10/1875 – Edinburgh Evening News – Smoke from brickworks destroying garden crops – At the Leith Small Debt Court this afternoon, James Wilson, market gardener, Morayfield, sued Thomas Field, proprietor of a brickfield at Hawkhill, for £18 16s 6d, restricted to £12, for loss sustained in consequence of the fumes or noxious vapours and smoke from the brick kilns belonging the defender destroying crop of leeks belonging to the pursuer, whose garden is close proximity to the brickwork. The defender’s agent stated that his client was from home, and asked for a continuation of the case until his return, the question involved a very serious principle, and if decided against his client it would have the effect of stopping the operations at this extensive work. Sheriff Hamilton granted a postponement.

25/11/1875 – The Scotsman – John Hutton Porterfield v Thomas Field. The Lord Ordinary to-day heard proof and gave judgment in this action, in which a gardener residing at Lochend Road, Leith, asked the Court to declare as against a slate merchant, brick and tile maker and quarry master, Hawkhill House, Lochend Road, that ( l ) the making or burning of bricks and tiles in open kilns, and ( 2 ) the use of a chimney of insufficient dimensions, or otherwise not properly adapted for carrying away or consuming the smoke from the furnace of a stone crushing or stone breaking machine, all as practised by the defender on his premises at Hawkhill, were nuisances and injurious to the pursuer and that he was entitled to have the same discontinued, and for an order on the defender, at the sight of the Court, to carry out such alterations as they should find necessary to prevent the recurrence of such injuries. The summons also concluded for an interdict to prevent the defender and his servants and tenants ( 1 ) from making or burning bricks and tiles in or near his premises in open kilns; and ( 2 ) from using the said chimney in connection with the stone-crushing or stone-breaking machine, or at least from carrying on these operations in such a way as to be injurious to the pursuer, and to occasion damage to his garden produce, fruit, fruit trees and other trees and shrubs; and for payment of £35 as damages already sustained. The pursuer maintained his title to decree as craved on the plea in law that the operations complained of were a nuisance and injurious to him. He said that, in the course of the defender’s manufacture of bricks and tiles, his kilns emitted sulphurous and gaseous fumes and smoke of a noxious nature, and that these fumes not only had a very disagreeable and noxious odour, compelling the pursuer at certain times to shut the windows of his house but also were most injurious to his garden produce. This result it was believed arose from the construction of the kilns and could be readily obviated. Further, the smoke from the defenders steam engine employed to drive the defenders stone crushing machine was injurious to the pursuer’s vegetable crops, fruit and fruit trees, owing to the chimney of the engine not being so constructed as to consume the smoke or carry it to a sufficient height. The defender denied the pursuers material averments of nuisance and refused to admit the claim of damages. The Lord Ordinary as a result of the evidence assoilzied the defender from the conclusions of the decision with expenses.

17/05/1876 – The Scotsman – John Hutton Porterfield v Thomas Field. This was a reclaiming note against the judgement of the Lord Ordinary Young (as per 25/11/1875 above) … the court today after hearing counsel for the parties, adhered to the interlocutor reclaimed against, with additional expenses … 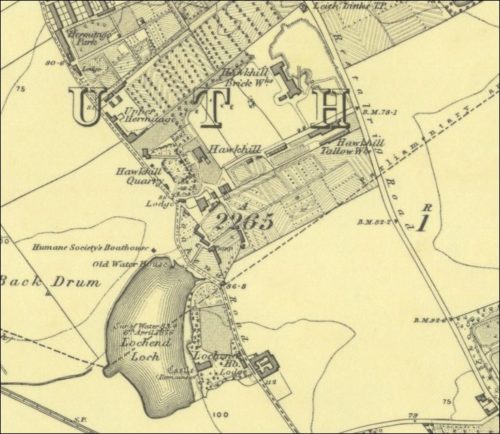 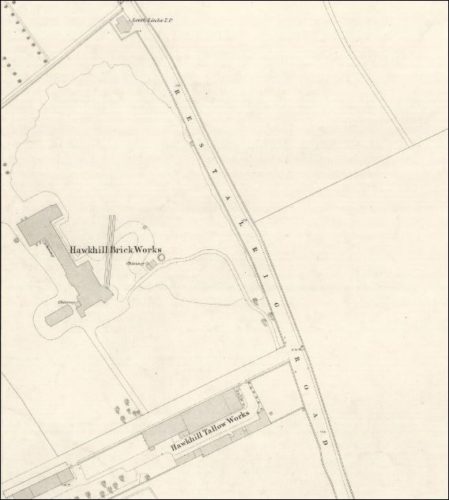 27/11/1878 – The Scotsman – To builders, plasterers and others, Field & Allan have now at Hawkhill a large stock of common and double stock bricks of superior quality, also pressed bricks, fine building and plastering sand now on sale. Particulars on application. NB – a free deposit for rubbish, all within tolls.

07/01/1882 – Dundee Evening Telegraph – Fall of chimney stalk at Leith – A man killed – From an early hour yesterday morning a strong westerly gale prevailed Leith, rendering walking inconvenient and dangerous from the number of slates, tiles, and chimney-cans which were falling. While the gale was at its height a serious accident occurred at the brickwork situated in a field adjoining the road leading from Restalrig, carried on by the trustees of the late Thomas Field. The brickwork, which presents a very tumble-down appearance, even for works of that description, is surrounded by walls, which have from time to time fallen or been blown down. It is situated immediately beyond Leith Links Toll, about three-quarters of a mile from the town. In the centre of the field, the buildings containing the machinery used in the manufacture of the bricks were clustered around the base of the stalk, which was about 100 feet in height, of square build. From top to bottom the chimney-stalk was very much rent, the cracks being plastered up, and the whole bound with iron hoops. Close to the base of the chimney was the boiler-house, and the northern end was small bothy containing a fireplace. In this, previous to the accident, six of the men employed the work were gathered, waiting until day broke to enable them to commence work. The gale was blowing with great fierceness, and at twenty minutes to eight o’clock a fall of loose mortar on the tiles of the house alarmed the men, and they rushed out of the place. Just as the last man, named Peter Smith, was emerging from the doorway the whole stalk came down, burying the building in falling debris and jamming the unfortunate man in the doorway, killing him instantaneously. The other men had a narrow escape. One of them named Cassidy sustained slight injuries about the head and left leg; another one was also bruised a little. Only about 25 feet of the west side of the stalk remains standing. The adjoining buildings and machinery were destroyed. Smith, who was about 60 years of age, resided at 8 Citadel Street and leaves a widow and a grown-up family. He is stated to have been employed at the brickwork for over thirteen years. His body was taken to Leith Hospital 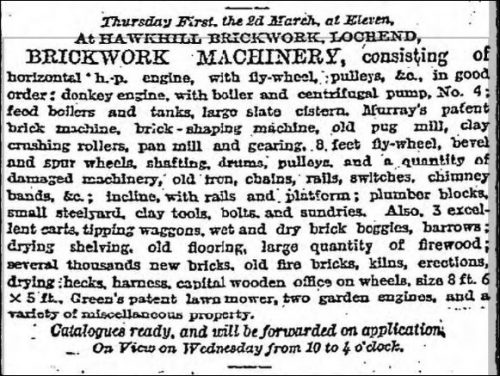 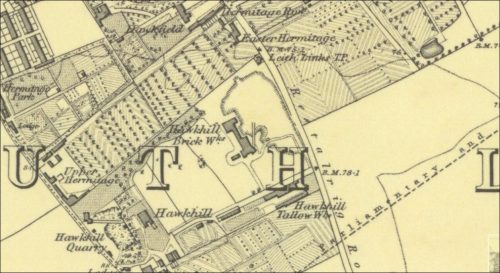 Below – 1894 – The brickworks appear to have gone but the quarry remains. 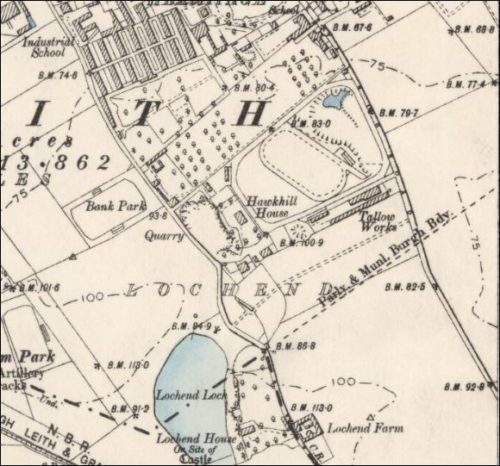 Below – 1913 – The brickworks appear to have gone but the quarry remains. 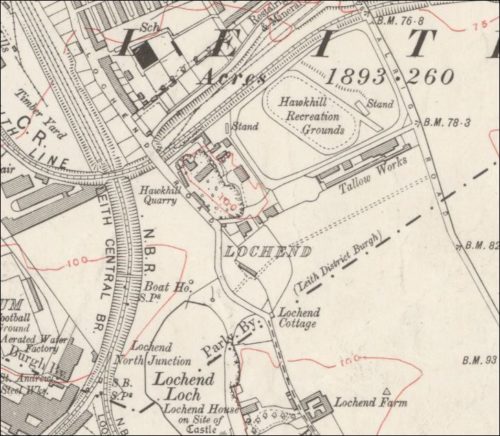