(Note – SBH – During my research the brickworks owned by the Coltness Iron Company at Knightswood. I believe these are references to the Jordanhills Brickworks, Knightswood and not the Knightswood Brickworks, Netherton. Both brickworks were situated very close to each other).

Jordanhill has a long history of mining, but the mines of North Jordanhill yielded not just coal, they also produced iron ore (ironstone) which was sent by canal to ironworks in the Airdrie and Coatbridge area for smelting into iron and the bings here provided fireclay for the manufacture of bricks in the local brickworks.

In a paper given to the Geological Society of Glasgow in 1887, James S McLellan gave a detailed account of the Jordanhill coalfield and its associated geology. He alleged that the top 18 feet of ground is generally made up of brick clay then a 35 feet layer of boulder clay, followed by several layers of shale on top of the shallowest coal layer. It should be noted that following recent investigations the overlying clay was found to vary between 13 feet and 37 feet.

Ironstone Mining – Another valuable material lay in seams below the area and was known as blackband ironstone. This was a dull grey material, heavier than coal, but was of a high quality such that just over two tons of raw material could be smelted to give a ton of pure iron. The seams were generally quite thin, between 9 and 18 inches, so large quantities of surrounding material had to be brought to the surface in order to actually dig it out. This resulted in huge bings of material such as blaes and clays (in addition to the material used for packing) and these bings led to the local industry of brickmaking.

As stated above, mining frequently results in additional unwanted material being brought up to the surface. Not only does it come from the excavations of pit shafts and the long tunnels needed to reach the seams of coal and ironstone, but also as thin unwanted layers immediately above the sought-after seams.

… There were 20 pits and mines in the counties of Lanark, West Lothian, Fife and Midlothian, and all, except 2 at Douglas – which were not quite completed – were fully equipped and in production. At Newmains there was a briquetting plant. 3 brickworks at Newmains, Hallcraig and Jordanhill were in efficient condition. The manufacture of enamelled fireclay goods was carried on at Newmains, and that of building bricks at Hallcraig and Jordanhill, the capacity of the 2 being about 20,000,000 bricks a year …

Jordanhill Brickworks were in operation until the raw materials were exhausted in 1928. From them were drawn the bricks for part of Glasgow Corporation’s housing estate at Knightswood. Whitewashed low roofed houses occupied by workers in the brickfields while modern buildings were raised around them struck a note of incongruity for a year or two. But there was something even odder – a truck barrier erected by the earlier mining company to keep out any enterprising trader hawking his goods, because that Company had a provision store of its own, and dwellers in the rows were expected to make all their purchases at the store. The Coltness Company wanted to remove that barrier but under its lease, it was not allowed.

When Jordanhill Brickworks were closed the machinery was transferred to the old colliery at Giffnock, on the other side of Glasgow. Giffnock Brickworks remained until 1942 when the lease ran out. The plant was then dismantled.

Below – Mrs Rachel Hamilton (nee Johnston), 1829 – 1899, nicknamed “Big Rachel”, was originally from Ireland but lived in Partick. She was 6 feet 4 inches tall and weighed around 17 stone. She worked as a labourer in Tod & MacGregor shipyards, as a forewoman navvy at the Jordanhill Brickworks and latterly as a farmworker at Anniesland. Big Rachel was sworn in as a special constable during the Partick Riots in August 1875.  source 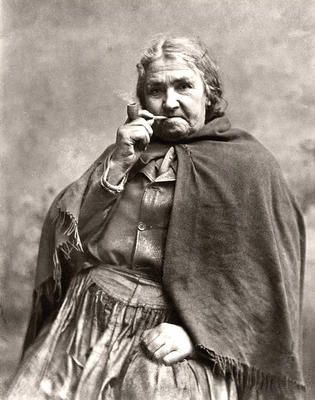 1890 – NMRS – Associated to the mining industry were two brickworks, those of Jordanhill and of Woodend. The former was established about 1890 producing building bricks. It survived until 1928, by which time the raw material, the local bings, was exhausted.

28/03/1891 – Lanarkshire Upper Ward Examiner – The utilisation of waste products in the Black Country of Scotland still proceeds apace. It is stated that some 15 million bricks will be used in the building of the brickworks which are to use up the Jordanhill blaise heaps. It will be the largest brick producing work in Scotland. (Jordanhill Brickworks?)

19/09/1891 – Lennox Herald – Dumbaton valuation appeal court – East Kilpatrick. Coltness Iron Company asked that the valuation of £150 on their brickworks at Knightswood be reduced to nil. At the point where the appellant’s works are, three estates meet, namely, Jordanhill, Scotstoun, and Knightswood. They have the blazes on the two first named, which are in Renfrewslaire, and have also rented a small bit of the latter estate in Dumbartonshire at £20, with the option of erecting buildings, which are to be removed at the end of the lease and the place left as before. The lease, appellants state, is for less than 21 years, and they maintain that as the buildings are only temporary they should not be assessed. Appellants quote a case in which the buildings occupied by the Marr Typefounding Company in Edinburgh were in question. The proprietrix let the premises to this Company and gave them permission to erect other buildings as necessary for the typefounding. They did erect substantial buildings and the assessor included them in the valuation roll, and the court sustained the appeal to be exempted. Mr Webber produced a return of the works, which had been made by the Coy. themselves at £150. He quoted the case of the City of Perth, where the Magistrates let the river banks for shipbuilding, and the premises erected for the shipbuilding were duly assessed, and the appeal dismissed. The appellants’ agent explained that the return of £150 was made in error. On the motion of Mr John Gilmour, seconded by Mr Sutherland, the appeal was dismissed.

17/02/1892 – Glasgow Evening Post – Accident in a brickwork – issues were ordered today by the Second Division in an action raised by Elizabeth Beattie Sherman, brickworker, residing at Knightswood Rows, near Glasgow, against the Coltness Iron Company (Limited), coal masters, 109 Hope Street, Glasgow, for £500 at common law. or £85 16ss under the Employers’ Liability Act, as compensation for the loss of her right hand while removing bricks from a stamping machine in the defenders’ works at Jordannill, 12th October last. The pursuer avers that the machinery was defective and dangerous, in the respect that an iron steam pipe which was between the stamps and the pursuer when she was working should not have been in the position it was, namely, beneath the level of the face of the stamp. Defenders deny that the machine was dangerous or defective, and say that pursuer’s own wrongful act and gross carelessness was the cause of the accident. 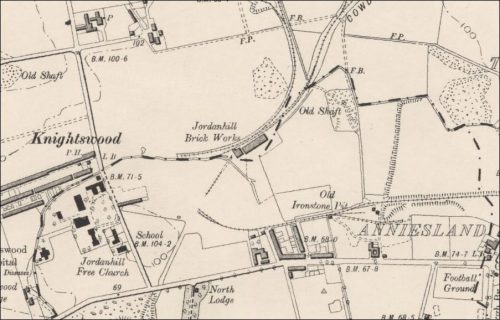 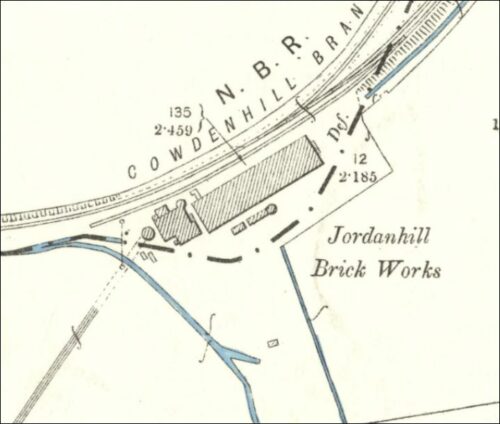 11/02/1898 – Glasgow Herald – North British Railway Company  – Proposed extension … No 3 and No 4 were deviations of existing mineral lines at Knightsbridge and Cowdenhall. These were necessary in order to permit the extension of the brickworks of Knightsbridge belonging to the Coltness Iron Company …

Below – 12/07/1899 – Daily Telegraph and Courier – Coltness Iron Company Limited prospectus. The three brickworks of the company are in an efficient condition and are situated at Newmains and Hallcraig, in Lanarkshire, both being the absolute property of the company and Jordanhill, Glasgow. The manufacture of enamelled fireclay goods is carried at Newmains, and that of building bricks at Hallcraig and Jordanhill, the capacity of the two latter being about twenty million bricks per annum. The properties absolutely owned by the company, including the above-mentioned purchase, are as follows (1) At Newmains, about 325 acres of mineral area, and 270 of surface area, upon which the blast furnaces, &c., are situated, and having abundance spare room for future extension. (2) Woodend, in Linlithgowshire, about 1,024 acres surface and minerals, upon which one of the company’s collieries. (3) At Hallcraig, in Lanarkshire, about 186 acres of surface and minerals, upon which is one of the company’s brickworks. The mineral in this property is chiefly clay band ironstone. (4) Mayfield and neighbourhood, in Lanarkshire, about 187 acres of the mineral area —chiefly clay band ironstone and limestone.

Below – 13/05/1904 – Milngavie and Bearsden Herald – Accident – While Charles Meechan, (28), Machinery greaser and residing at Walker’s Square, Maryhill, was engaged at his usual employment at Coltness Brickworks, near Knightswood. (Jordanhill Brickworks?) on the morning of Saturday, 7th May 1904, when his left foot slipped off the edge of the brick-mixer in which was encased a revolving shaft studded with knives, which caught his foot and dragged his left leg in among the knives, which broke and twisted his foot and leg above the knee. Dr Hutcheson. Maryhill was immediately summoned, who, on arrival, amputated his leg. Meechan was immediately afterwards conveyed in an ambulance to the Western Infirmary.

11/08/1905 – Milngavie and Bearsden Herald – Samuel Cochrane, brickfield worker residing at 6 Netherton Rows was at Dumbarton Sheriff Court on Monday last charged with an assault on L. Smith, brickfield worker, near to Jordanhill Brickworks on 21st July last. Accused pled not guilty but was convicted on evidence and sentenced to pay a fine of 20s or suffer 14 days in prison.

27/06/1913 – Milngavie and Bearsden Herald – Accident on the railway …  References an accident when a female was crossing from the west to the east side of the branch line of the North British Railway, which leads to the Coltness Brickworks, near to Netherton … 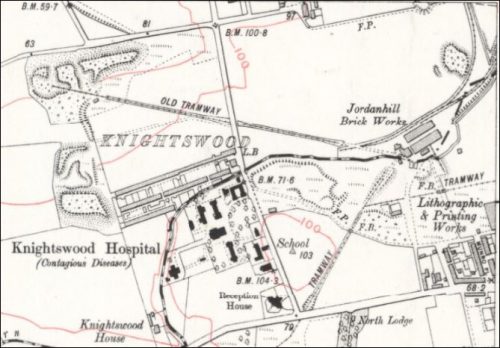 05/03/1915 – Milngavie and Bearsden Herald – Accident on the railway – About 5.30 p.m. on Monday, while John Cowie (35), unmarried, a brakesman in the employment the Caledonian Railway Company, and residing c/a Carson, 105 Petershill Road, was attending to the points on the N.B. railway branch line between Temple and Coltness Brick Works, near Fulton Street, Temple, he attempted to cross in front an engine coming from the brickworks, which knocked him down and fractured his right leg. He was removed in an ambulance waggon to the Western Infirmary, where Dr Peate found that he had sustained a compound fracture of both bones of the right leg above the ankle.

25/06/1915 – Milngavie and Bearsden Herald – Temple – Accident – Peter Calder (46), Netherton Street, was braking a railway waggon in the works of the Coltness Brick Company at Knightswood, when an iron bar which he was using got caught in the wheels of the waggon, struck him on the right side, and threw him against a scaffold, fracturing his left collar bone.

Below – 1928 – NMRS – Associated to the mining industry were two brickworks, those of Jordanhill and of Woodend. The former was established about 1890 producing building bricks. It survived until 1928, by which time the raw material, the local bings, was exhausted.