John Paterson, brickmakers and building contractors were founded around 1865, by John Paterson, the son of a stonemason. The business became John Paterson & Son in the mid-1880s when John Paterson Junior (c. 1873–1931) joined the firm. Over the next three decades, they became increasingly active in brickmaking, acquiring Nursery, Sheepmount, Caledonian and Temple Brickworks, all on the south side of Glasgow. The Patersons based themselves at several addresses around Polmadie and Pollokshaws Roads for most of their existence.

The firm became a limited company in 1891 with a share capital of £40,000. Having decided to concentrate on brickmaking, the company sold off their electric winches, steam cranes, lathes, theodolites, and other builders’ plant in 1913. Their brick kilns in Polmadie Road were still active in 1939.  The firm ceased operations in 1963 – source

21/05/1874 – North British Daily Mail – Court of Session – John Paterson, builder and brick manufacturer, Glasgow and John Morrison, builder, Glasgow against William Smith Dixon Limited, coal and iron masters, Glasgow and J Logan residing 239 Bath Street, Glasgow manager for the said company at the Govan Colliery Works … Messrs Dixon closed off a road leading from Aitkenhead Road westward by Govan Colliery  Works and Offices to the Cathcart Road and Alison Street, all in the City of Glasgow … Messrs Dixon claimed it was a private road and Paterson claimed it was public and a road he used and the public had used for 40 years without issues. (Note – SBH – This location was situated in the Polamdie area where John Patterson owned lands). 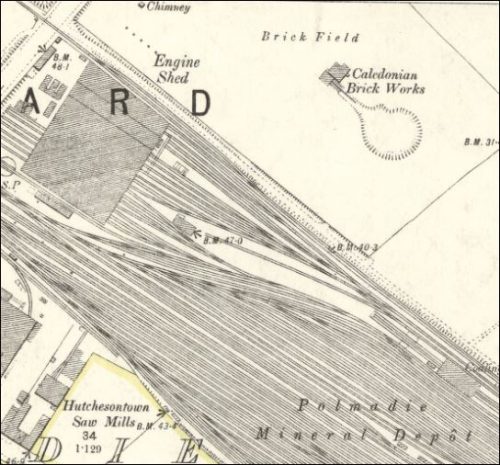 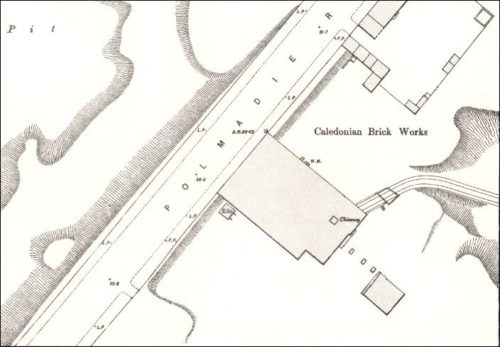 Below – 1893 – The two maps above for 1893 show different structures for the Caledonian Brickworks but they are adjacent to each other. It looks like there were 2 areas of manufacture on the same site. 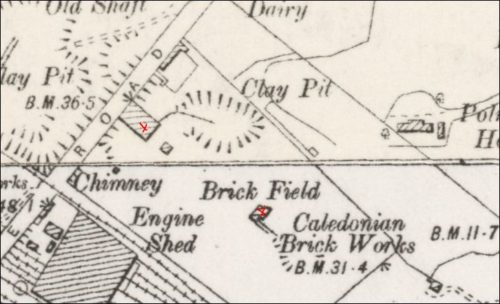 14/12/1928 – Milngavie and Bearsden Herald – Repair of Douglas Street Bridge – The Burgh Surveyor submitted 16 tenders for the repair of the bridge at Douglas Street. These were opened in the presence of the meeting, when it was found that the lowest tender was that of Messrs. John Paterson & Son, Ltd., who offered to carry out the work for £225, with £28 in addition for extra brickwork. The Council agreed, on the motion of Councillor Hunter, seconded by Hon. Treasurer Taylor, to accept Messrs John Paterson & Son’s offer. 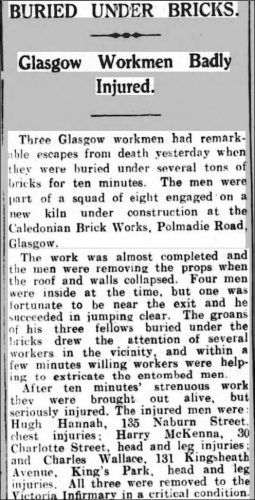 An inquiry into the proposals contained in the Glasgow Corporation’s “Development Plan” was held at the Justiciary Buildings, Glasgow, last month.  A proposed new outer ring arterial road at Polmadie was the subject of objections by John Paterson and Son Ltd., brickmakers, 91, Polmadie Road, on whose behalf it was stated that the road would intersect a clayfield at Toryglen and sterilise 131,000 cubic yards of clay, representing between 35,000,000 and 40,000,000 bricks.  The firm’s scheme at Toryglen would, in fact, have to be scrapped, if the plan were approved, although the area was the only remaining one in Glasgow and district from which clay for brickmaking could be obtained.

It was also stated for the firm that 11,000,000 Belgian bricks, said to have been of poor quality and dear, had to be imported into Scotland last year and that the Ministry of Works had been and were still pressing them to increase production.  The firm had also supplied Glasgow Corporation with 1,000,000 bricks in the last six months.