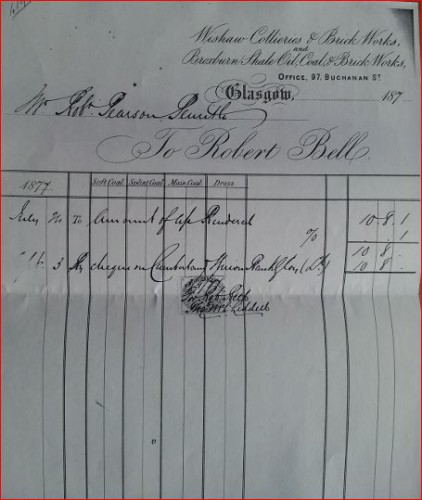 Below – 28/10/1921 – Linlithgowshire Gazette –  We have just seen a sample of the new bricks which are being turned out at the rate of 10,000 bricks per day at the new works at Philipstoun. The brick is of a grey-ish granite-like appearance and is made from 50% of lime and spent shale. It will be interesting to see how this new product goes on the market. £5 per 1000 is the price we understand. If the Philipstoun venture is a success we can look for an extension of the new industry. No one would regret the disappearance of the shale bings and the creation of work would be manna to the hard-hit shalefield workers. Mr Thomas McKelvie, Port Buchan House informs us that it is a mistaken idea that bricks have not been made in this district from the spent shale. In 1870 Mr McKelvie worked at the brick making plant in the Broxburn Oil Works then owned by the late Robert Bell, Gerson Park. The bricks were made half of clay and half of spent shale and were hand moulded. The staff was not a large one but a considerable quantity of these bricks were made. It took about ten days for the process in the kiln to produce the finished article. These bricks had a good sale and were mostly conveyed by canal boat to Edinburgh and elsewhere. Mr McKelvie is not aware of any local building being constructed with them. He says that time proved that the bricks would not stand the action of the rain etc and the demand dropped. The new scheme at Philipstoun has greatly interested him and he hopes to see in the near future plant established again on the old site.