Carfin Colliery Brickworks, Carfin, North Lanarkshire. (Note – SBH – When researching these works it is often very confusing whether information gleaned should be recorded on this page or the page for the Carfin Brickworks. If anyone believes information is wrongly recorded then please let me know).

Canmore – This brickworks is not named on the OS Map surveyed 1896. However, one roofed building to the northwest of Carfin Colliery (Pits No. 1 and 2) is shown (at NS77087 58052 ). This became part of the expanded works (Ordnance Survey 6-inch map, Lanarkshire, edition 1938-9, sheet XII.SW). By the 1980s it had been demolished. Some bricks in the area are marked: Carfin, ATC, and Taylor Auchenlea. (These work may have been connected in business with the Jenny Lind Composition Brickworks – Source – Survey of Scottish Brickmarks).

1868 – 1869 – Alexander Gray Simpson, Coltness and Carfin Collieries, Wishaw. James R. Hopewell, agent, 37 Commercial Street. (Note – SBH – Alexander Gray Simpson was a coal master with interests in Wishaw, Carfin, Shotts and Irvine. Among titles, he was a founding member of the Glasgow Coal Exchange. Following the collapse in the coal trade, in 1880 he emigrated to America. His grand mansion house, known originally as Carfin Hall and later as Wrangholm Hall, built just to the west of Carfin colliery, survived until 1995 when in its derelict state it finally was demolished).

30/09/1872 – Glasgow Herald – Composition and fire bricks may be had, by cart or rail in large quantities at A. G. Simpson’s Carfin Colliery by Motherwell at current prices or by contract.

18/10/1884 – Wishaw Press – A very serious accident occurred on Friday at the brickwork at Carfin belonging to the Carfin Coal Company. It appears that at the time of its occurrence, Thomas Farrel, 35 years of age, was busy working at a face of clay, about 8 feet in height and about 6 feet from him his nephew, a boy about 4 years of age was standing. The face suddenly fell and buried the two under it. The body of the uncle was first reached and on its being removed life was found to be extinct. When got at, the boy was gasping for breath and black in the face. He was severely injured internally and small hopes are entertained for his recovery.

On Monday another accident occurred at the brickwork. A boy of thirteen years named John Cowan, residing in Omoa Square, Cleland was clearing out the rhone which conveys the ground fire clay to a circular sieve which had got choked when he accidentally slipped and his foot got entangled in the pinion wheel which drives the sieve. Before it could be extricated one of his toes was crushed off and two others were badly lacerated. The lad’s father had him taken to Dr Duncan, Cleland who dressed the injuries.

12/01/1889 – Airdrie and Coatbridge Advertiser – Glasgow Western Infirmary. The secretary begs to acknowledge, with thanks, receipt of the following contribution from Carfin Coal Co, Carfin Colliery and Brickwork, Motherwell – £2 2s.

31/05/1890 – Wishaw Press – Fatal accident. Action for damages. In the second division of the Court of Session on Tuesday, their Lordships had before them an action at the instance of Mrs Susan Clarke or Clarke, Mason Buildings, Carfin against the Carfin Coal Company in which decree is asked for £500 as damages for the death of the pursuers son, Laurence Hoolahan. The lad was, on 7th January last, assisting the driver of a bogie engine in taking three wagons full of bricks to a lye across the public road, and when attempting to spragg the waggons he was struck with the spragg and thrown on the rail in front of one of the waggons which passed over him. He died the next day. The work, it is maintained, was unsuitable for a boy under 15 years of age. The defence is that Hoolahan is an illegitimate son and that he used an improper piece of wood in attempting to spragg the waggon. The fault is denied, and it is maintained that the mother of an illegitimate child has no title to sue. The Sheriff dismissed the action as irrelevant upon that ground and their Lordships sent the case to the ? roll for discussion of the question.

1893? – The survey of Scottish Brickmarks states these works were owned by the Carfin Coal Company. (Note – SBH – However, the works are not marked on the 1897 map albeit the Jenny Lind Brickworks are. The survey also suggests that Steetley Ceramics were the owners in 1981 but I think they may be assuming that the Carfin Colliery Brickworks and the Jenny Lind were on the same site which they do not seem to have been albeit they were close. For further research).

22/07/1893 – Wishaw Press – A widow’s action for damages. In the Court of Session on Tuesday, issues were appointed to be lodged in an action by Mrs Kellochan, the widow of a brick moulder at Carfin, on behalf of herself and her pupil children, against Wm. Dixon, Limited, iron and coal masters. Glasgow, to recover £1000 at common law, or £313 under the Employer’s Liability Act, as compensation for the loss of the pursuer’s husband, who was killed by the fall of a stone from the roof of the defenders’ No. 6 splint coal pit, Carfin Colliery. 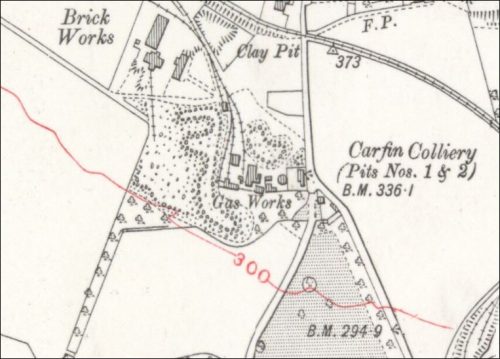 01/09/1933 – Motherwell Times – Wee Paddy Priestman, the Wellington Street navvy, has been causing great excitement at the Watsonville “bing’ these past eight days, and passers-by have been amazed at Paddy’s ability to handle square-mouthed shovel. All are agreed, however, that the nature of the bing, its solidity, and its stoney contents, really demand that Wee Paddy should have been sent along with his big brother Mick, as the job is just beyond Paddy’s strength. In sand, or in loose material of any kind, Wee Paddy is worth any half-dozen navvies, and there is no quarrelling with him nor threats of a strike. In another respect, however, Paddy has been a great disappointment to almost every unemployed man in Wellington Street, who was looking forward to the time when he would be employed in this work of picking and shovelling the contents of the bing into wagons for transport to Carfin Brickworks. We put no blame upon the contractor, as he is entitled to remove the bing by a wave of his magic rod, should he possess such a handy instrument, but all the same the method adopted has given rise to much dissatisfaction.

Below – 23/10/1936 – Motherwell Times – A general view of Colvilles Ltd, Motherwell … in the immediate foreground we have Carfin Brickwork and beyond it Carfin Byres Farm … 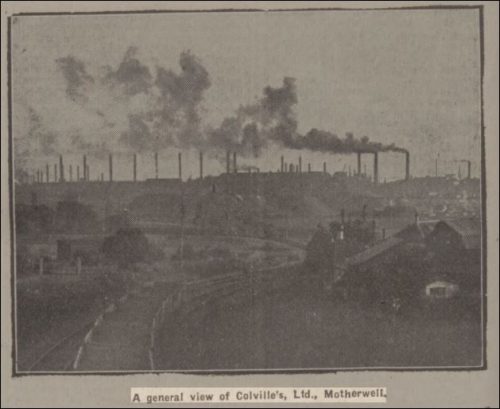 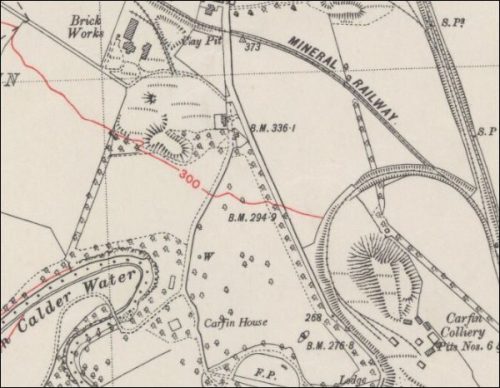 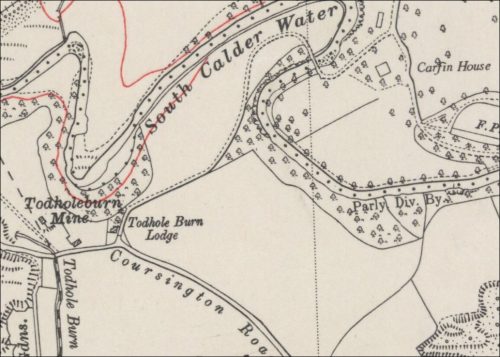 29/07/1938 – Bellshill Speaker – Brickworks restart  Good news for Carfin – Production was commenced on Wednesday morning at the restart of Carfin Brickworks, belonging to Wm. Dixon & Co., which had been closed for the past two years. When the works closed two years ago there was a stock on hand of two million bricks, but with the brisk demand for these bricks for housing scheme purposes, the total stock had become exhausted. The demand continuing good, and with fair prospects for the future, the firm decided to re-open the Carfin works. During the past few days, intensive preparations were made preparing the material for the kilns. By a fortunate coincidence the firm opened up a new mine in the Todholeburn district, about half a mile away, and the clay and other materials brought to the surface in the sinking of the mine have been found to answer the purpose required for the making of bricks, and a good and inexpensive raw material has thus been acquired in the company’s own ground. The first round of bricks were drawn from the kilns on Wednesday morning and stored in the yard. The revival of the industry will be welcomed in the Carfin district which has suffered from unemployment.

06/01/1939 – Motherwell Times – Brickworks closed – Prospects of steady employment for 50 Carfin workers have been greatly upset by the fact that the Carfin Brickworks belonging to Messrs. Wm. Dixon and Company, Ltd., have been closed. Shortly before the holiday period these works closed down but were expected to resume soon after the New Year. About 50 employees are affected by the stoppage. Six months ago the works were re-opened after being idle for nearly two years. The materials required for the making of bricks were procured from colliery bings in the vicinity which belong to the firm, but it has now become difficult to obtain the necessary materials from this source. The brickworks have been closed until the difficulty regarding material can be got over.

29/11/1940 – Motherwell Times – Industrial prospects in Carfin, which suffered extensively through the closing down of the collieries in the district, have been considerably improved by the re-opening of the Carfin Brickworks, which are owned Messrs Wm. Dixon and Company Ltd. The works were closed nearly two years ago through lack of material. The re-opening of the Carfin Brickworks has been brought about through the steady demand for bricks. The material necessary for the making of bricks is conveyed from the company’s mine at the Todholeburn which was opened two years ago. The company has also, it is understood, the necessary material at other collieries and mines which it owns. In order to facilitate the delivery of blaes, etc., which are required to make the bricks, and dross for firing purposes, the old railway lines from the Cleekhimin Brae are being cleared and re-laid.

08/08/1947 – Motherwell Times – What – No brickworks – While they have not been operating for several years, the dismantling of the Carfin Brickworks, work on which commenced last week is causing much controversy in the surrounding district. Comments are not in a congratulatory vein and practically everyone is of the opinion that in view of the present shortage these works would assist greatly in the provision of bricks for building in this district in preference to bringing them from other areas. In addition to providing a much-needed employment of local workers, the transport question would be greatly eased and cost reduced. At the present time when every available brick is required to help to meet the housing problem, it does seem strange to think that these works which were first operated about 40 years ago should be dismantled just when needed most. While production would not compare with more modem works, there does appear to be some reason for the complaints of local people.

c. 1948 – OS Map shows the workings but the Brickworks are not marked.