Robertson, Love & Co were liquidated in 1916 but continued to make firebricks as part of United Collieries Ltd. When coal was nationalised in 1947, the brickworks were reorganised as United Fireclay Products Ltd. and comprised the Etna and Atlas Firebrick Works, the Bathville Pipe Works, the UNICOL Tile Works, all at Armadale and the Brownhill Building Brickworks at Clelland, Lanarkshire. The chief refractory brands were Etna (33% alumina), Atlas (38% alumina), and Atlas A (42% alumina), all based on local fire clays. The Bents Mine near Stoneyburn supplied an excellent 42% alumina fireclay from which the Mars brand was made, but the fireclay was worked out and the mine closed in 1929. The Drum Mine near East Whitburn took over and the Northrigg No 7 pit supplied fireclay for pipes and some coal. The Tippethill Mine (38% alumina, 2.5% iron) replaced the Drum Mine in 1960 and the Pottishaw Mine replaced Northrigg in 1963. 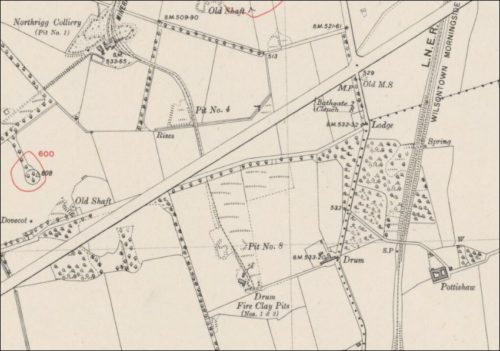 11/02/1944 – Linlithgowshire Gazette – James Dick, miner, pleaded guilty by letter to having, on 24th January, conducted himself in a disorderly manner and committed a breach of the peace at the Drum Fireclay Pit at Bathvllle, Armadale. The Fiscal said that the manager of the colliery had instructed this man to go somewhere else, but he would not go and had a good deal of talk about it. Evidently, he used very threatening language to the manager. In his letter, the accused said that the manager had sent him to a wet place, and he refused on the ground that there was not a suit of oilskins. The manager said the place was “dry,” and he went into it with the manager following. The manager kept threatening him with three days’ suspension, and he lost his temper. A penalty of 30s was imposed with the alternative of ten days imprisonment.

28/09/1945 – West Lothian Courier – Reference to 2 men being convicted of a break into the office at the Drum Fireclay Pit, Bathville.