Robertson, Love & Co were liquidated in 1916 but continued to make firebricks as part of United Collieries Ltd. When coal was nationalised in 1947, the brickworks were reorganised as United Fireclay Products Ltd. and comprised the Etna and Atlas Firebrick Works, the Bathville Pipe Works, the UNICOL Tileworks, all at Armadale and the Brownhill Building Brickworks at Clelland, Lanarkshire. The chief refractory brands were Etna (33% alumina), Atlas (38% alumina), and Atlas A (42% alumina), all based on local fire clays. The Bents Mine near Stoneyburn supplied an excellent 42% alumina fireclay from which the Mars brand was made, but the fireclay was worked out and the mine closed in 1929. The Drum Mine near East Whitburn took over and the Northrigg No 7 pit supplied fireclay for pipes and some coal. The Tippethill Mine (38% alumina, 2.5% iron) replaced the Drum Mine in 1960 and the Pottishaw Mine replaced Northrigg in 1963.

29/04/1960 – West Lothian Courier – Notice is hereby given that application is being made to the County Council of the County of West Lothian, as Local Planning Authority by United Fireclay Products Limited, 140 West George Street, Glasgow, C. 2, for planning permission to drive a mine and erect buildings on the lands of Pottishaw Farm, approximately 2000 feet due South of the village of Standhill, and win, work and carry away the fireclay, blaes and other refractory minerals and brick -making materials located under the whole lands of Inchcross Farm and part of the lands of Pottishaw Farm. Planning permission is also being requested for the use of the existing roadway which joins the present Glasgow-Edinburgh Road A8 at Standhill Village and runs due South to Redmill, as the vehicular access from the above-proposed mine. The plans showing the location and the area covered may be inspected at the Company’s Offices, Bathgate, Armadale, West Lothian. Any owner of the land (including any person entitled to possession of the land under a Lease, the unexpired period of which is not less than ten years), who wish to make representations to the abovementioned Local Planning Authority about the application, should do so by writing, within twenty-one days from the date of publication of this notice, to the County Clerk, County Building, Linlithgow. For United Fireclay Products Limited, J. H. Johnston, secretary, 140 West George Street, Glasgow. 23/04/1960.

Below – 23/02/1979 – West Lothian Courier – Qualified mine electrician required for Pottishaw Mine. 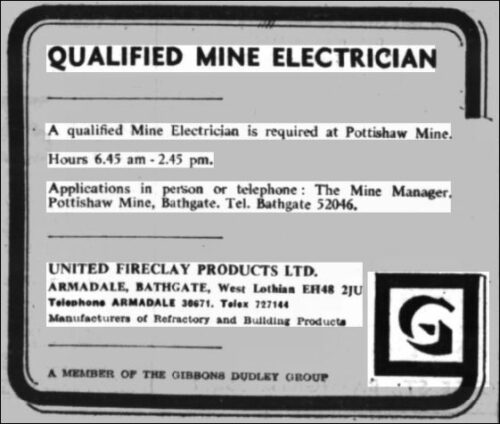