Glentore Fireclay Works, Greengairs, Airdrie, North Lanarkshire. These works may have been a fireclay mine as opposed to a works manufacturing products from fireclay.

Many thanks to Tony Jervis for identifying these works and supplying much of the information below.

This page should be read in conjunction with the Rawyards Brickworks page.  The 1936 – 1937 entry below refers to Alexander Frew & Co manufacturing ‘Glentore’ stamped bricks and the inference is that they were manufactured at the Rawyards Works. The Rawyards and Drumbathie Brickworks are mentioned but there is no reference to any Glentore Brickworks.

Below – 1923 – A map that details a ‘Fireclay Works’ to the NE of Wester Glentore. Shows a siding to ‘Fireclay Works’ 1 km south of Fannyside Lochs, with tramway symbol
northwards to just across county boundary. It is unusual for such industrial sites to be marked on 1″ maps.  The farm of Torbex is also detailed but the location of this farm appears to move in later years to a site just south of the ‘Fireclay Works’. 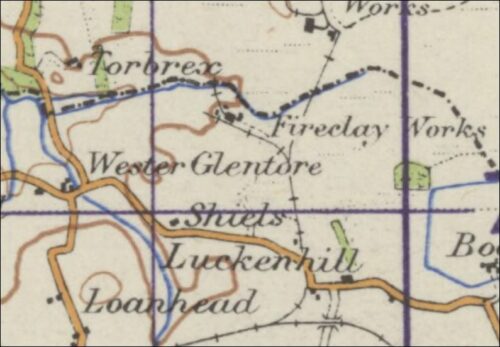 01/08/1927 – Motherwell Times – (Note – SBH – It appears that Alexander Frew also had an interest in the Glentore Coal Mine, Greengairs. The mine was situated just a few hundred yards to the South East of the ‘Fireclay Works’). Cleaning of boilers – first prosecution in Scotland. the Airdrie Sheriff Court on Tuesday last, before Sheriff Macdiarmid, an unusual prosecution under the Mines Act was brought the Procurator Fiscal, with the consent of the Board of Trade, against Alex. Frew, G. T. Wm. Black, and Wm. Sneddon, the owner, agent, and managers respectively, of Glentore Coal Mine, Greengairs, being a mine to which the Coal Mines Act, 1911, applies. The charge was to the effect that a Lancashire boiler, having been used for the purpose of generating steam said mine from 2nd November 1925 to 28th May 1924, and the persons from time to time charge of the said boiler during the said period having failed to clean out and examine it internally, far as its construction would permit, during the whole said period, the respondents failed to make all reasonable mean 3 to prevent the failure to clean and examine the said boiler as aforesaid, contrary to Sections 56 (1), 75, and 101 (2) of the Coal Mines Act, whereby they were each liable the penalties set forth in Section 101 (3). understood this is the first time charge of this kind has been brought in Scotland. J. C. Macgregor, for the defenders, tendered a plea of guilty and made explanation to the effect that the coal was being opened at Glentore, and that shaft had previously been sunk, and they were the act of having a sloping shaft made in connection with the operations the pit-head. The boiler had not been put off for cleaning as there was danger of the stoppage of the pumping causing the mine to be flooded … 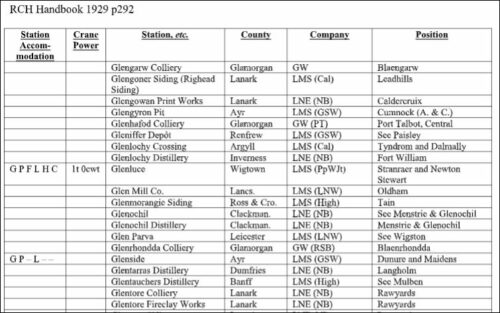 Below – Page 578. With references to the Glentore Fireclay Works and the Rawyards Brickworks which undoubtedly suggests they were situated at two different locations.

11/04/1929 – (2) Alexander Frew & Co., Ltd. v. The Commissioners of Inland Revenue. (Note – SBH – Note the third entry in paragraph 3.  It might imply that Rawyards made bricks from Glentore fireclay and specifically marketed them under that name which may suggest that the Glentore Fireclay Works was indeed a fireclay mine).

Case –  At a meeting of the Commissioners for the General Purposes of the Income Tax Acts for the Middle Ward District of the County of Lanark held at Hamilton on the eleventh day of April, nineteen hundred and twenty-nine, Alexander Frew and Company, Limited, Brickmakers, Rawyards, Airdrie, hereinafter referred to as ‘the “Appellants’ appealed against an assessment of sixteen thousand one hundred and fifty-four pounds, less an allowance for wear and tear of plant and machinery of five hundred and thirty-four pounds, under Schedule D of the Income Tax Act, 1918, for the year ending fifth April, nineteen hundred and twenty-eight, in respect of the profits of the business carried on by them, the assessment being based upon the accounts of the firm of Alexander Frew and Company for the year ending thirty-first December, nineteen hundred and twenty-six.

I. The following facts were admitted or proved:–

2.There was no agreement of sale between the Appellants and the said Alexander Frew. The business of Alexander Frew and Company was taken over as a going concern, and there was no cessation in trading as a result of the change of ownership. The profits as from first January, nineteen hundred and twenty-seven, accrued to the Appellants, but for Income Tax purposes the date of succession was twenty-ninth March, nineteen hundred and twenty-seven.

3.The business carried on by the Appellants consists of:–

(1)Manufacture of fire brick and other fireclay goods at Rawyards, Airdrie;

(3)Mining of fireclay at Glentore for the purpose of (a) supplying the Rawyards Works, and (b) marketing ground fireclay;

(5)Agency for the sale of coal at Bothwell Street, Glasgow, discontinued as from 28th May 1928.

13/02/1932 – Airdrie & Coatbridge Advertiser – Contributions to charity. The employees of Alexander Frew and Co., Ltd., Rawyards, Drumbuthie and Glentore Works, Airdrie have contributed to the undernoted institution for the past year: … 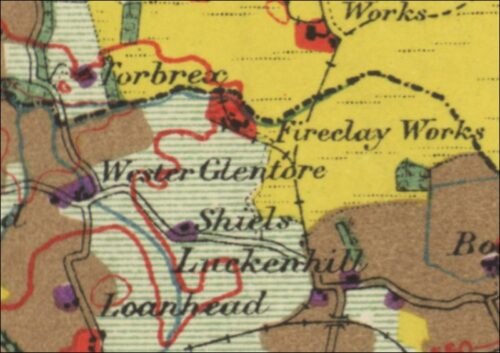 16/06/1933 – Motherwell Times – Abandoned mines. The H.M. Inspector of Mines has notified Lanarkshire County Council of the abandonment of the following mines  … Glentore Mine, Greengairs belonging to A. Frew and Co Ltd … (Note – SBH – I am uncertain if this refers to the Glentore Colliery Mine or the Glentore Fireclay Mine). 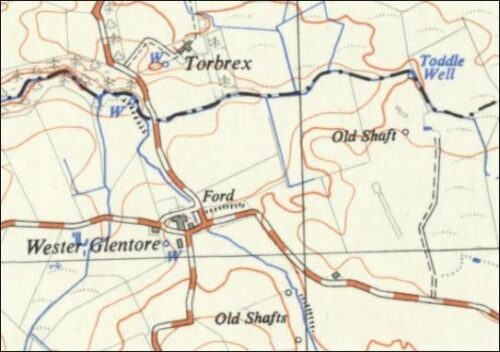 Below – 1964 – Shows Chimney, two unroofed buildings and Adit at NS 792723.  No railway connection is marked. (Tony states – While searching through maps
yesterday I discovered that there was a drift mine adjacent to the Palacerigg Railway, seemingly opened, presumably for coal by the NCB, in the 1960s south of the Glentore Fireclay Works sidings.  I haven’t searched for details of this mine, but it is just possible that the adit mentioned at the second link was a similar NCB adit.  However, even if it was, it does not disprove the existence of the earlier ‘Fireclay Works’). 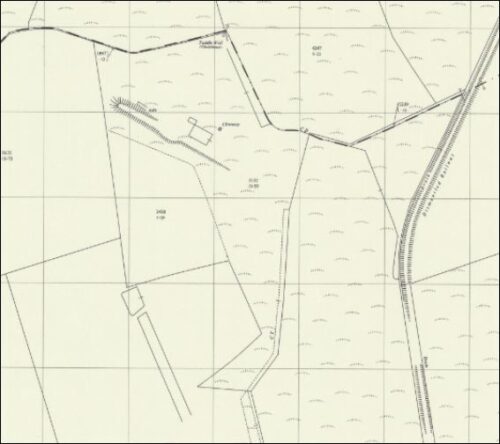 Below – 1995 – Photo taken by Tony Jervis – It shows the course of the standard-gauge siding approaching the works, with the depressions in which sat the railway sleepers very clear, this looking approximately west-north-west. 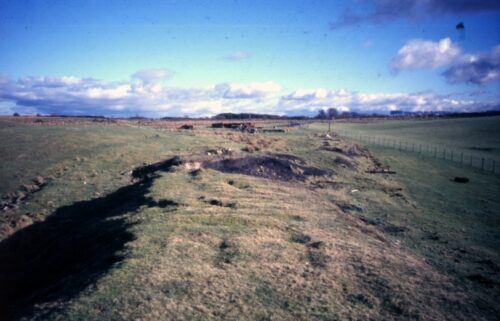 Below – 1995 – Photo taken by Tony Jervis – It shows the remains of various works buildings, looking north-west. 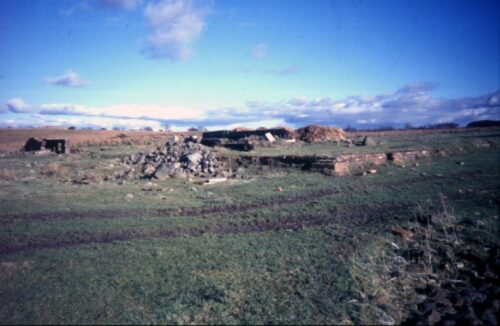