Alex Frew & Co operated two brickworks to the east of Airdrie in Lanarkshire. Rawyards Brickworks commenced working in the late 19th century, whilst the Drumbathie Brickworks to the south of Rawyards was in production from the early 20th century. Production at this latter works ceased c.1960.

12/11/1892 –  Airdrie and Coatbridge Advertiser – Presentation to Mr Alex. Frew. On Monday evening last a deputation of the employees of Rawyards Brickworks waited on Mr Alex. Frew at his father’s residence, Broomknoll Street, Airdrie, and presented him with a massive marble dining room clock, and for his bride a handsome case of fruit knives and forks. Mr Hailstones, the foreman at the works, made the presentation, and in the course of his speech remarked that the workers gave their subscription most heartily, which was proof of the good feeling existing between employer and employees. They wished Mr Frew a long life and happiness and all manner of success in the business recently started at Rawyards. Mr Frew replied, thanking each and all for their costly presents, and also on behalf of his bride, and hoped that the good feeling which Mr Hailstones had alluded to as existing between himself and the worker, would long continue and he would leave nothing undone on his part for the present good relations to continue in the future. The company was afterwards entertained to supper, and an enjoyable evening was spent. The clock bore the following inscription: Presented to Alexander Frew, Esq., on the occasion of his marriage, by the employees of Rawyards Brickworks and a few friends November 10th, 1892. The clock was of chaste design, and the knives and forks of silver, with mother-of-pearl handles, enclosed in a polished oak ease. The articles were supplied by Mrs Robertson, jeweller, Stirling Street, Airdrie. Last night the male and female workers at the Rawyards Brickworks were entertained to supper and ball on the occasion of Mr Frew’a marriage. The large drying shed at the works was transformed into a splendid ballroom, well lighted and heated, and was admirably adapted for dancing. Over 30 sat down to supper. Mr Hailestones, the foreman, presided, and in proposing the health of Mr and Mrs Frew, referred to the kindness of their esteemed employer in providing for their pleasure that night. This was endorsed by the company present. Afterwards, dancing was kept up with spirit for a considerable time. 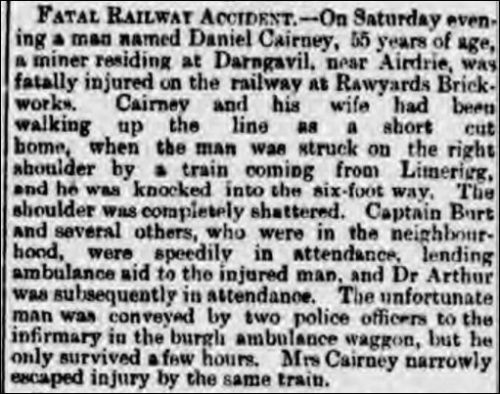 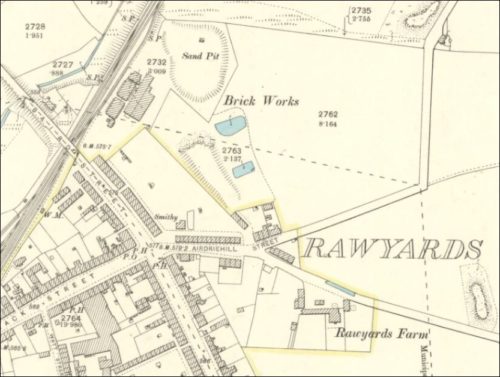 1902 – Alexander Frew had a share in the Larkhall Fireclay Co. 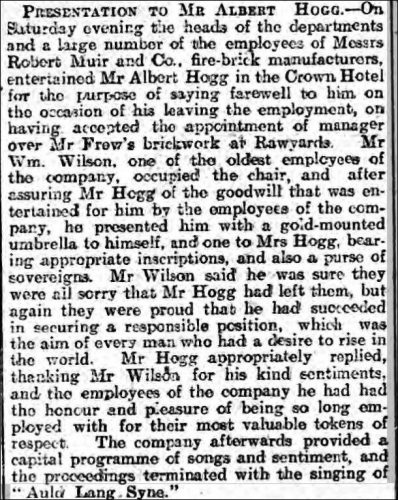 20/02/1915 – Falkirk Herald – Kiln burner – wanted to burn firebricks and salt glazed goods. Newcastle and downdraft kilns. Must be steady. Apply foreman, Rawyards brickworks, Airdrie.
25/03/1916 – Airdrie and Coatbridge Advertiser – Contractors wanted to offer for emptying kilns or burnt brick and loading into waggons. No man engaged in Government work need apply. Apply Rawyards Brickworks, Airdrie.
17/03/1917 – Airdrie and Coatbridge Advertiser – Contractors wanted to empty burnt brick from kiln to waggon. Apply Frew, Rawyards, Airdrie.
16/03/1921 – Kirkintilloch Herald – Kirkintilloch Town Council – Supply of bricks – At the meeting of the Housing Committee, a letter was read from the Board of Health with regard to the supply of bricks. Bailie Johnston said the letter had given them permission to purchase bricks in the open market at 120 /-. He understood that bricks were being made at Rawyards at 65/- and he hoped Bailie Shanks would take every opportunity of keeping the Committee clear of the extraordinary extravagance that was going on in connection with those housing schemes.
02/09/1922 – Airdrie and Coatbridge Advertiser – The Sub-Committee, with Mr Wilson, inspected the pipes and bricks which were being used in carrying out the work in Wellwynd and Stirling Street when Mr Wilson expressed himself as satisfied with the materials in use. Mr Wilson agreed with the view of the Burgh Surveyor and Resident Engineer as to the pipes which had already been rejected. Thereafter the Sub Committee, along with Mr Wilson, proceeded to the Burgh Surveyor’s Office and there considered offers which had been taken for clay bricks and composition bricks and, having inspected the samples, agreed that the offer of Messrs Alexander Frew & Co to supply clay bricks at 58s per 1000. as per sample, at the Works should be accepted. Mr Wilson expressed the view that clay bricks were preferable to composition bricks for the building of manholes.
Below – 12/05/1923 – The Scotsman  – Banking transactions in Russia – Action against Alex Frew & Co, brick manufacturers, Rawyards, Airdrie. R. Runeberg, St Petersburg. 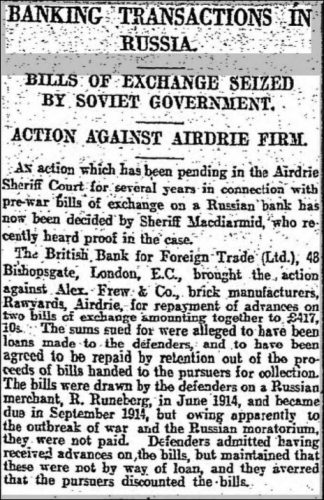 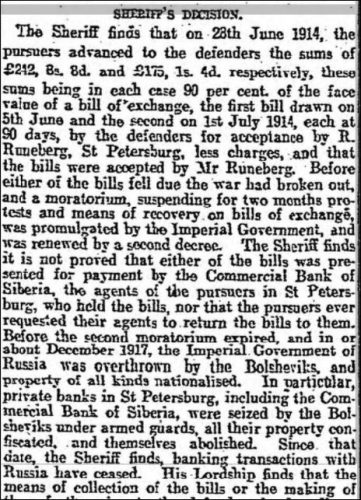 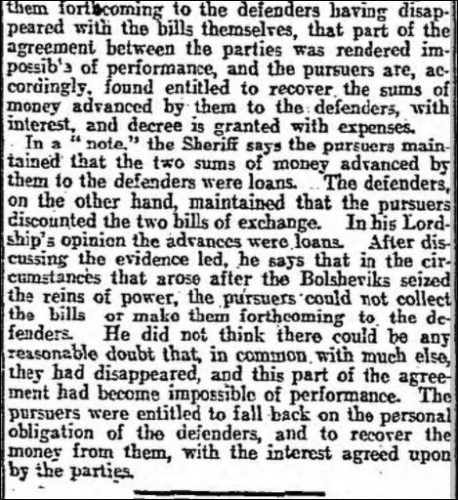 18/09/1925 – Motherwell Times – The curious thing about an appeal by Alex. Frew and Company in respect of their brickworks at Rawyards was that part of the property is in the county and the remaining portion of the burgh of Airdrie. The county portion has been valued by the assessor at £180 and Messrs Frew claimed that it should be £80. On hearing Mr Frew’s statement, Mr Murray said people were willing to pay a high feu duty or ground annual, then they came and attempted to squeeze an advantage out of the assessor. The appeal was dismissed.

26/08/1927 – Bellshill Speaker -Airdrie Provost’s death. On tour in Canada. The death has occurred of ex-Provost Alexander Pate Frew, J.P.,  Airdrie, while on a tour in Canada.

He left Airdrie on 15th July for a holiday in Canada and the United States, accompanied by his daughter, Dr Mary Frew.  They had been touring about and enjoying their holiday, meeting many Airdrie people in the course of their travels, but over a week ago ex-Provost Frew was laid aside with serious illness and became a patient in the General Hospital, Montreal.  The trouble developed so rapidly that an operation for peritonitis was found necessary.  The news was cabled on to his family, who were on holiday at Millport, and on Saturday morning a further cable was received that he had passed away.
Mr Frew was the second son of the late Mr John Frew, contractor, Airdrie, and in early life was associated with his father in contracting work.  Later he acquired an interest in coal mining in the district and became concerned in the working of various pits.  He also took up brick making and developed that line till he was latterly running two of the most flourishing brickworks in the country,  viz.,  Rawyards and Drumbathie, under the firm name of Alex.  Frew & Co.  He was also connected with various other ventures in the district, such as the peat-casting company started a number of years ago in the Arden and Longriggend District and the opening of new mines in the north-eastern part of the parish.
In politics, Mr Frew was a prominent Conservative.  He was president of the Airdrie Unionist Association and presided at many big gatherings of the party at election times.   He was also a joint vice-president, and as such a member of the Executive of the Monklands Burghs Unionist Association, while he also took an active interest in the work of the Junior Imperialist Union.

He has a long and active municipal record.  He became a member of the Airdrie Town Council in December 1894, and being a practical man in regard to contracting and other business, he proved of great value in some departments of the burgh work and was a convener of the Road Committee for many years.  He was a magistrate of the Burgh for eight years, Dean of Guild for four years, honorary treasurer from November 1921.  He then retired from municipal work, having truly “borne the burden and heat of the day” for the long continuous spell of 27 years.  He was Provost for seven years in all, having been prevailed upon by the Council to continue on, after his second period of three years was finished, for one year more to finish the war work, and other undertakings, which he had initiated.  In much of the work he organised for sending the parcels to the troops, he was ably assisted by his wife and daughters, and leading townspeople who gathered around them, and the good done in this way in supporting and sustaining our armies in the field and our navy on the seas was incalculable.

13/02/1932 – Airdrie & Coatbridge Advertiser – Contributions to charity. The employees of Alexander Frew and Co., Ltd., Rawyards, Drumbuthie and Glentore Works, Airdrie have contributed to the undernoted institution for the past year: …

1936 – 1937 – Frew, Alexander & Co., Ltd. (manufacturers of the famous ” Glentore ” and ” Rawyards, Glasgow,” brands of firebricks and Fireclay; furnace blocks, sanitary Pipes and connections; chimney Cans and fireclay goods of every Description; first quality red clay Building bricks), Rawyards Works and Drumbathie Works, Airdrie. Tel. 43 Airdrie. Barracks depot, Gallowgate C.4 (Tel. No., 363 Bell).
12/06/1937 – Airdrie and Coatbridge Advertiser – New Brickworks for Plains Airdrie and district are sharing in the brick-making boom caused by an unprecedented demand for building material which is being made at the present time. The Airdrie Brickworks are extending their works in order to double their present production, and a new brickwork, to cost about £15,000 is being constructed at Stepend Colliery, Plains.  At Rawyards Brickworks, the oldest brick works in the district, Messrs Alex. Frew and Co., Ltd., are working to capacity to meet orders from many parts of the country. The Plains Brickwork is being constructed by the Ardenrigg Coal Company and will make use of pit refuse at Stepend Colliery. When completed, the works will be able to produce as many as  20,000 bricks per clay. It is expected that the new works will give employment to about 50 men. Builders are at present engaged the construction of the kilns and other plant, but they will not be ready for use for a few months yet. Mr A. S. Smith. manager of the Airdrie Brickworks told an “Advertiser” reporter what the effects of the extension being made to the works would be.  At the present time, there are 26 kilns in operation giving a weekly production of 16,000 bricks. The extension, which includes extra milling plant, will provide 18 more kilns and it is estimated, will bring the weekly production up to 320,000 bricks. The Airdrie Brick Works were only started about 17 months ago and production was not commenced until four months later. When the extension is completed two or three months hence about 65 men will be employed at the works. The clay brick process is used at those works and it is considered that there is sufficient pit refuse at the Howlet bing to supply them with material for about 20 years. The works are at present busily engaged fulfilling contracts for Newsatleton,  Perth, Edinburgh, Dundee and other parts of the country. A number of exceptionally good contracts have been secured by Messrs Alexander Frew & Co., at the Rawyards Brick Works. Their capacity of 170,000 bricks per week is fully taxed, and the hundred men employed there are likely to be kept busy for many months yet. The Rawyards Brickworks specialises in the making of clay facing bricks used in the construction of schools, housing schemes, and factory buildings. At Dumbarton, two monuments of their work are being built in the Blackburn Aircraft Factory and the distillery being erected for Messrs Hiram Walker & Co., Ltd. More than three million bricks are required to those two contracts. The firm has also supplied bricks for the building of the new engineering shop of Messrs Hastie, Greenock.  They have also secured contracts front the local authorities of Glasgow,  Airdrie,  Greenock, Port Glasgow, Gourock, West Lothian, Bathgate and the County Council.  The works are equipped with a battery of  Hoffman’s Kilns, eight Newcastle Kilns, and four round downdraft kilns.
Below – 1938– Rawyards Brickworks, Airdrie. 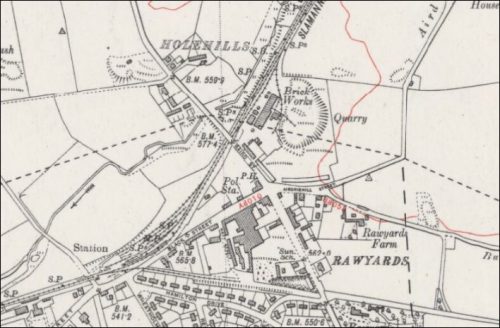 c. 1960 – The 1985 publication ‘A survey of Scottish brickmarks’ suggests the works closed around this time.