07/05/1864 – Paisley Herald and Renfrewshire Advertiser – Clyde Navigation Bill – Mr Robert Brown examined – l was Provost of Paisley from November 1856, to November 1859. I have two separate works at Paisley, and in one of them, I manufacture drain pipes for field drainage and also common building bricks. The quantity of drain pipes which I make is very large, and about the one half of them is sold in the district and the other half is put into vessels and sent to places on the Clyde and West Highlands of Scotland, and Ireland. The dues present payable on these, for the part they are carried on the Clyde, are one penny per ton. According to the new Bill of the Clyde Trustees, this rate will be rather more than doubled. The quantity of common building bricks which I make is also very large. The best market which I have for these bricks is Greenock, and they are either sent there in boats by the Rivers Cart and Clyde or by railway. The carriage of bricks at present by water to Greenock is 6s 3d per 1000, and by railway, it is 6s per 1000. At present, therefore, the carriage by railway to Greenock is three pence per 1000 under that by the Rivers Cart and Clyde. By the proposed alteration of rates in the new Bill, this difference will be increased to sixpence per 1000. The quantity bricks which I have sent to Greenock by the Rivers Cart and Clyde and railway together during the last three years has averaged about 800,000 yearly. The selling of the bricks and the drain pipes I have to compete with makers upon the side of the railway who are nearer to Greenock than I am, and also with makers upon the side of the Clyde below the River Cart, on the Forth and Clyde Canal, and also the Ayrshire coast. The goods which I manufacture at my other work, called the Ferguslie Fire Clay Works, consist of fire bricks, sewerage pipes, and other articles made of fire clay. I send a very considerable quantity of these goods by vessels down the Rivers Cart and Clyde and which are shipped at Paisley. I have a house in Belfast and also one in Dublin, and the quantity of goods which I send to these places of business is very large. The Clyde dues on these goods are partly one penny and partly fourpence per ton, and by the new Bill are proposed to be more than doubled. In selling these fire clay goods in Ireland I have to compete with some extensive works on the Ayrshire coast, and also in Wales. I have also a place of business in Glasgow to which I likewise send these fire clay goods, but they are forwarded by the Paisley Canal. I never send any goods to Glasgow by the Rivers Cart and Clyde, because the expense and inconveniences attending such mode of transit are such as to make it almost impracticable. Some years since an effort was made to send goods in this way for shipment at the Broomielaw but it had to be given up. I find it to be much better and cheaper to send goods by Paisley Canal to Port Eglinton at Glasgow and then cart them to the ship’s side at the Broomielaw. The quantity of coals which I bring from Glasgow along the Paisley Canal to my Fire Clay Works is about 9000 tons annually, and the quantity of manufactured fire clay goods which I  send annually to my place of business in Glasgow is about 4000 tons. I am of opinion that if the dues are increased upon the Clyde as proposed it will very much interfere with my business and that of the other traders on the Cart. The vessels which I engage to ship goods at Paisley do not draw more than 8 feet of water when loaded, and the great depth of the water, therefore, which has been obtained in the Clyde by expensive operations is not required by me or any of the other traders on the Cart. The kind of goods brought to Paisley by the Rivers Cart and Clyde which yields the largest revenue to the Cart Trust is wood and it is about equal to the one half of the whole revenue. The dues paid to the Clyde Trust on this wood is, I believe, fivepence per ton, and by the new Bill, it would eleven pence per ton. I am of opinion that if this increased rate is carried into effect it would be very injurious to the importers of wood, and likewise to the revenue of the Cart Trust. Cross-examined by Sergeant Bellasis—The proposed difference in rates would amount to one penny per ton on the use of 12 miles the River Clyde, but which, however, is the double of the present rates. That would take much from the profits of my business, and looking to the competition that exists in Ayrshire and other places it is of the greatest importance that the means of transit should be as cheap possible. The quantity of my manufactured goods which I send down the Rivers Cart and Clyde is about 5000 tons annually. This yields about £20 a-year to the Clyde Trust, and if the Bill passed it would be doubled. To the Clyde Trustees who are such a powerful and wealthy body the proposed increase of rates is but a small matter, but the doubling of the rates to the other trustees and myself is of serious importance. At the conclusion of the evidence, the Committee found the preamble of the Bill, in so far as it related to a mileage rate not proved. 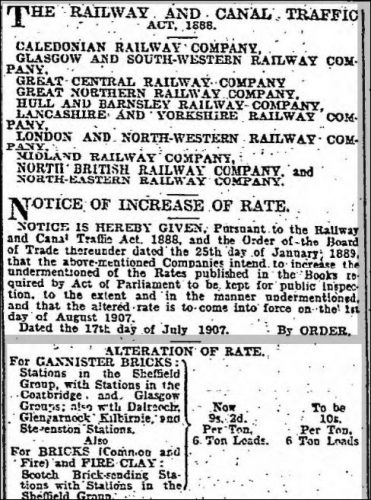 27/08/1920 – Menace to house building – Scottish brickmakers will be hard hit by the forthcoming increased railway rates for the carriage of bricks. I pre-war days the carriage of bricks from Scotland London was 18s 2d per ton. In January the rate became 21s 2d and on Wednesday will jump to 36s 10d. The new rate will have a serious effect upon prices, indeed, it is asserted that the price will advance by something like £5 per 1000 bricks, which would practically put the Scottish made brick out of the market. House building operations will be interrupted since the Brickmakers Association has decided to suspend all deliveries of bricks from Wednesday to stations where the revised rates exceed 4s of an increase per ton.

18/09/1920 – The Scotsman – Scottish brickmakers and the railway rates – The fire brick and building brick makers in Scotland are assiduously pursuing their negotiations with the Ministry of Transport with a view to obtaining a revision of the new railway rates as far as that affect the transport of bricks. The omission of the limiting clause B, under which bricks are carried has been strongly protested against and at a meeting of the manufacturers held in the North British Station Hotel, Glasgow yesterday, over which Mr John G Stein, Bonnybridge presided, a report was submitted on behalf of the Committee which had conferred with the Ministry on the subject. It was announced that the Parliamentary Secretary to the Ministry had agreed to make various inquiries among the railway companies and to submit a memorandum to the Ministry of Transport for his consideration as to whether it would be advisable to propose a revision to the Rates Advisory Committee in view of the statements put forward particularly as affecting the Scottish brick trade.

26/11/1920 – Kilsyth Chronicle – An article on housing … In conclusion, he referred to the expense of transport, citing, as an illustration, the cost of taking facing bricks from certain parts of England. These bricks were from £4 5s up to £5 per 1000 in price. To transport these bricks from, say, the Tyne to Falkirk and from Barrow in Furness to Edinburgh cost £9 16s and £10 10s respectively per 1000 bricks. The state he said could never foot a bill of this kind …