Works: Situated about a mile east of Heathfield and Garnkirk, Lanarkshire, Scotland.

This was the fourth fireclay works to start in the Garnkirk area. It was founded by James Binnie in 1863. In addition to firebricks, they also produced silica or ganister bricks, ornamental chimney pots, garden paving and edging tiles, and glazed pipes of every description. The works lay two miles east of Garnkirk. The Glenboig Union Fire Clay Company bought the firm in 1890 after the death of the owner. In its 1930 catalogue, The Glenboig Union Fire Clay Company still offered GARTCOSH brand firebricks as “a good fire-brick at a cheap price.” The Gartcosh works continued in operation until the 1950s when local supplies of fireclay were exhausted. The works were demolished by the 1960 and the site was built over by 1979.

Below – 22/03/1865 – Glasgow Herald – Gartcosh Fire Clay Works. The attention of shippers and other parties requiring fire bricks, sewerage pipes, chimney cans, and other fire clay goods, is respectfully requested to the Gartcosh Fire Clay Works which are equal in quality to any in the market. Samples may be seen and prices ascertained at the Office, 42 Bath Street, Glasgow. Robert Miller Manager.

03/06/1866 – Dumfries and Galloway Standard – Moffat – Drainage and water scheme … the Commissioners have contracted with Mr James Binnie, of Gartcosh Fireclay Works, Glasgow to furnish the drainage pipes for £716 9s 8d …

Below – 1867 – Advert James Binnie, Gartcosh (Apologies for the double printing – it is as it is in the directory). 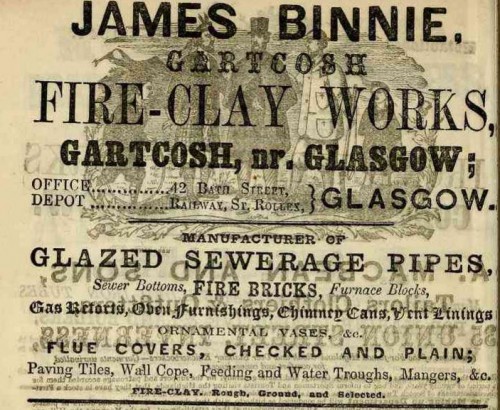 03/04/1885 – Dundee Courier – Gas Commission … There were 13 offers for retorts when that of the Gartcosh Fire Clay Company was accepted.

10/08/1898 – Kirkintilloch Herald – Gartcosh brickworkers tug of war team – Gartcosh Brick Workers v. Moodiesbum No. 1 met in the second round. Several of the brick workers had prepared themselves for the tug by turning the heel plates of their boots upside down, the big nails obtruding considerably. This being against the rules of the competition, the men were sent to the pavilion to change their boots, an operation they were in no hurry in doing. When they came back they were pulled over the line quite easily. The second pull was stiffer, but Moodiesburn again won.

11/03/1890 – Glasgow Herald – Fatal accident at St Rollox. About One o’clock yesterday afternoon a waggon driver named John Inglis, living at 39 North Oswald Street was fatally injured on the waggon way of the East St Rollox Depot of the Caledonian Railway Company. Deceased had been engaged driving waggons laden with fire-clay from the depot into the yard of the Gartcosh Fire-clay Company, and it is supposed that he missed his footing and fell before the wheels, which passed ever his body, which was very much mutilated.

15/11/1890 – The Scotsman – Gartcosh Fireclay Works to be sold by public roup within the Faculty Hall, St Georges Place, Glasgow on 26th November 1890 at two o’clock afternoon unless previously disposed of by private bargain. The works which have been carried on by Mr James Binnie since 1863, along with the interest in the mineral leases, managers and workmen’s houses, railway siding and the whole working plant and machinery. The works are at present in full working order and will be sold as a going concern. Renta derived from buildings £118. Reduced upset price £7000 …

27/11/1890 – The Scotsman – The Glenboig Union Fireclay Company Limited has bought at the upset price, the Gartcosh Fireclay Works, so long carried on by Mr James Binnie.

24/12/1890 – Kirkintilloch Herald – Gartcosh Fire clay Works have been purchased from the Trustees of Mr Binnie, by the Glenboig Coy., who enter into possession on 1st January 1891. Whatever the changes may take place in the management of the works, it is to be hoped that the services of the present managers and foremen will be retained, as they are very popular in the neighbourhood. From the energy with which the Glenboig Coy carry on their business, further impetus to the fire clay trade is confidently expected in this district.

01/01/1891 – ‘Garnkirk Fireclay by G Quail’ – In 1890 the Gartcosh Works were purchased from the trustees of the James Binnie by the Glenboig Union Fireclay Company who entered into possession on 01/01/1891. The new owners continued to develop the works. Capital investment included a new grinding machine in 1898 and electric pumping equipment at the fire clay pit in 1907. Gartcosh Works continued in operation throughout the first half of the 20th century but closed when local supplies of fireclay were exhausted during the 1950s.

13/03/1901 – Kirkintilloch Herald – Miners strike. The fire clay miners employed by Messrs Dunnachie at Glenboig and Gartcosh; Messrs Hurll at Gartliston; and Mr Phaill (Faill?) at Heathfield, Garnkirk have come out. The men some time ago made a demand for an increase of 4d per ton. This the masters refused to grant. The fireclay miners then joined the Lanarkshire Miners County Union, and negotiations were commenced on behalf of the men by Mr Gilmour. On Saturday the demand was modified to an increase of 1 1/2d per ton. Almost simultaneously with this, the masters posted up a notice of a reduction of a penny per ton, with the result that Mr Gilmour has brought the miners out. The number of miners engaged at Glenboig, Gartcosh, Gartliston and Heathfield number about 250. The effect of the strike is likely to throw all the brickworks at these places idle soon as the present surplus stock of fire clay is used up and will consequently cause a very large number of men employed as moulders, burners, etc., to be idle.

20/03/1901 – Kirkintilloch Herald – Wanted. Miners to keep away from Glenboig, Gartliston, Gartcosh and  Heathfield Fireclay Pits during the present dispute.

21/01/1905 – Airdrie and Coatbridge Advertiser – Fatal burning accident – Yesterday an engineman named John Campbell died within the Alexander Hospital from the effects of a burning accident sustained at Gartosh Fireclay Brickworks on Thursday. The deceased had been cutting a naphtha barrel when by some means it ignited and exploded. He leaves a widow and five of a family

1927 – John Wright was the superintendent of the brickworks in Gartcosh prior to 1927. He was hired by J C Robb & Co to build and run National Refractories in Port Robinson Ontario, Canada. (Information from Ian Wright who is the grandson of John Wright).

26/03/1952 – Kirkintilloch Herald – Brickworks dance – Promoted and organised by Gartcosh Brickworks Social Service Club a very enjoyable dance was held in St. Andrew’s Church Hall on Saturday. Music, comprising old-time and modern, was provided by the Carlton Band from Airdrie. Proceeds derived from this function will augment the club funds.

19/02/1955 – Airdrie & Coatbridge Advertiser – The dance held in St. Andrew’s Church Hall on Saturday was promoted by the Gartcosh Brickworks Social Club. There was a good support for the effort and the club funds will benefit. Music was supplied by the Imperial Dance Quartette.

1958 – 1959 – Works closed? – ‘Garnkirk Fireclay by G Quail’ – In 1890 the Gartcosh Works were purchased from the trustees of the James Binnie by the Glenboig Union Fireclay Company who entered into possession on 01/01/1891. The new owners continued to develop the works. Capital investment included a new grinding machine in 1898 and electric pumping equipment at the fire clay pit in 1907. Gartcosh Works continued in operation throughout the first half of the 20th century but closed when local supplies of fireclay were exhausted during the 1950s. 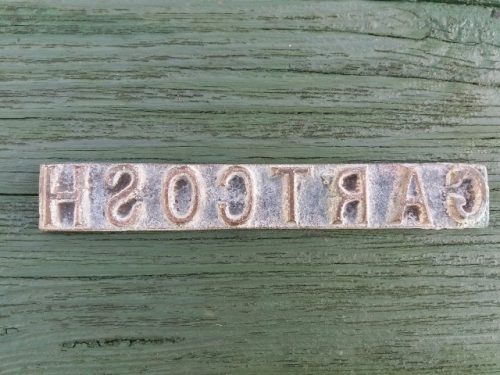 Below – A Gartcosh drain stone seen at Glenboig village. 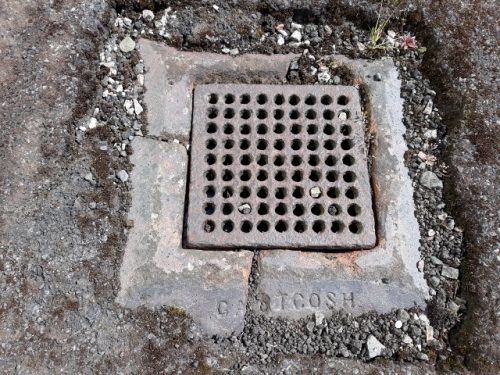