Home / Brick making machines / Drainage Pipes, metal grills, Floor tiles, Roof ridges, Chimneys, Air bricks etc / John Ainslie, Redheugh, Nr Dalkeith, Midlothian.
John Ainslie was a farmer from Redheugh, Nr Dalkeith Scotland.  in the 1840’s he invented and patented brick and tile making machines. He also invented and patented a procedure and method for drying and burning bricks using kilns which were of the ‘continuous’ type. This was some 9 years prior to Hoffman continuous kilns appearing in Scotland. He also lived and operated the Alperton Tile-works, near Acton in Middlesex. It is believed he moved there from Dalkeith rather than owning both places at the same time.
January 1840 – John Ainslie patents a brick and tile making machine – page 231.
1841 – Agricultural Show Berwick Upon Tweed  – Specimens of beautifully made draining tiles by Mr Ainslie, East Lothian were exhibited.
22/05/1841 -Patents for inventions. Abridgements of specifications – N° 8965. John Ainslie. — Machinery for making or moulding tiles, bricks, retorts, tubes, and other articles. The clay descends between a pair of feeding rollers (each furnished with a doctor or scraper beneath for guiding the clay) into a case containing a screw, by the revolution whereof the clay is forced into a chamber, and thence through moulds suitably formed to produce the articles required; and, on emerging therefrom, the moulded clay is received by a travelling endless web, which carries it beneath a cutting apparatus for dividing it into proper lengths. For making drain tiles, the roof of the chamber is formed on its internal side with diverging arches, each arch diverging to its corresponding mould, so that the day, in its progress to the mould, receives an embryo shape, and is enabled to discharge itself in straight lines. Moulds for retorts must have cores suspended therein. When making house tiles, each mould must be formed with a sluice or stopper, by raising which a knob or button is left on the tile.
Source – John Ainslie, a Scottish farmer from the country around Dalkeith, Midlothian, became interested in tile making machinery, which could be adapted for brickmaking by using a different die: a die is a plate with a hole in it through which the clay is extruded; the shape and size of the hole through which the clay must pass can be changed to suit the finished product. Ainslie wanted to make tiles to drain his land and then found that he could use the same machine to make bricks. He took out his first patent in 1841. It was claimed that his machine was the first which allowed the cutting of bricks and tiles without the whole process coming to at least a temporary halt. Ainslie secured further patents: in 1845, for a more refined version of his
machine and, in 1846, for a complete brickmaking system linking pug mill, moulding through extrusion and wire-cutting, kilns and drying rooms. Ainslie’s machines were in use by Thomas
Cubitt at his works at Burnham Rectory, Aylesford, Kent.
( information via Moses Jenkins – in 1843 John Ainslie lodged a Scottish patent for a method of drying bricks, this being a system of kilns he had developed along with the continuous principal. These kilns were described in 1846 as being ‘composed of various compartments by which the heat from the first passes into the second, from hence to the third, and so on thus economising on fuel. A further description came in 1849 and described the Ainslie kiln as ‘applying the surplus heat of the burning kiln … To the complete drying and partial burning of the goods in the series of kilns in connection. In 1850 Henry Caddell states that Ainslie Kilns were already erected at Heathfield Fire Clay Works and Garnkirk Brickworks. A further reference comes from a contract for the redevelopment of Dalquharran Brickworks where ‘Ainslie type kilns’ were erected this being some 9 years before the first continuous Hoffman kilns arrived in Scotland)

Source…..Other experiments with the use of rollers in extrusion machines were conducted by a Scottish farmer, John Ainslie. Ainslie’s first patent in 1841 specified a large pair of rollers to crush the clay before it passed into a horizontal mill where it was forced by a double spiral screw out through a die. The die was actually a combined die and moulding chamber in the form of three curved tiles of descending sizes. Once shaped, the stream of clay moved forward to a special cutting apparatus consisting of two wires attached horizontally to a pair of continuously revolving chains allowing the tiles to be cut without stopping the movement of the machine (British Patent No. 8965, 1841; Figure 5.6.). By 1845, Ainslie seems to have dispensed with the screw and his second patented machine was said to be an “adaptation of Tweeddale’s” having a pair of rollers to force the clay directly through the moulding chamber.

He also altered his cutting apparatus introducing a compressed air piston to activate the wires (British Patent No.10,481; Transactions of the Yorkshire Agricultural Society 1845, p.26, hereafter TYAS). A year later Ainslie patented still further improvements, this time a smaller machine fed by hand from a separate pug mill. The patent specified “a series of rollers placed in such a position as to form the mould for the brick, and moving simultaneously in such manner that the bricks shall be formed by the revolutions” (British Patent No.11,155, 1846).
The machine also was adapted to form a frog in the bricks either by a projection on the rollers or with a specially designed “lifter” that raised each brick and scooped out a hollow. The sudden and decisive changes in machine design as seen in Ainslie’s successive patents over five short years were not mere whims on the part of the inventor. As we shall see below, they illustrated the rapid stabilisation in the form of extrusion machinery that occurred in the 1840s as a result of deliberate efforts by the Royal Agricultural Society of England to provide a forum for the exchange of information about new machines and for testing and evaluating machine performances.
1843 – Royal Agricultural Society of Ireland – The model of Ainslie’s tile making machine, having been detained by accident in a steamer, arrived after this report had been made out. The judges however thought proper to admit it and highly commended it as a useful machine. Requiring 5 horsepower will cost for the machine alone £150 and will make 24,000 tiles per day. The award to the exhibitor, Mr Sleight of Edinburgh, the society’s silver medal.
Below – 16/07/1844 – The Repertory of Patent Inventions: – page 231 – John Ainslie, Farmer, Redheugh, Dalkeith patents an improvement on his existing brick and tile making machine. 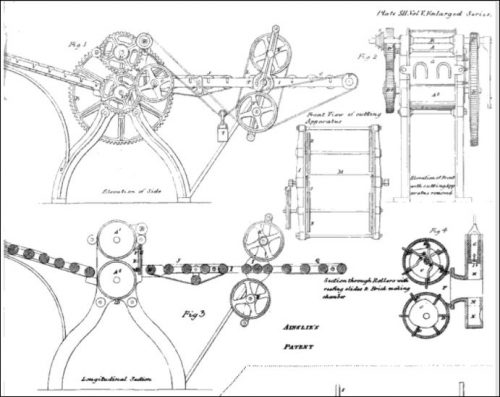 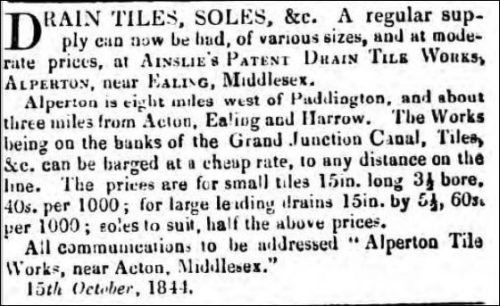 18/01/1845 – Patents for inventions. Abridgements of specifications – No 10,481 – John Ainslie. — Improvements on the machinery which formed the subject of Letters Patent No 8965. The day, in instance, is conducted by a travelling endless web to a pair of rollers (each provided with a hinged scraper), which carry it into a chamber and force it through a mould or moulding orifice in front of the same on to an endless web, whereby it is carried to the cutting apparatus. A screen (with a descending sluice or cleaner) may be placed in the middle of the chamber to separate stones or roots from the clay. When sandy clay or peat is to be moulded into tiles or bricks, rollers with “reefing slides ” (moved in and out by a cam) must be substituted for the plain rollers. Also, employing a piston for cutting off bricks (as they emerge from moulding orifices) by means of the pressure of compressed air.
Below – 03/05/1845 – Shipping and Mercantile Gazette – Ainslie’s new improved patent – draining tile machines and drying process. 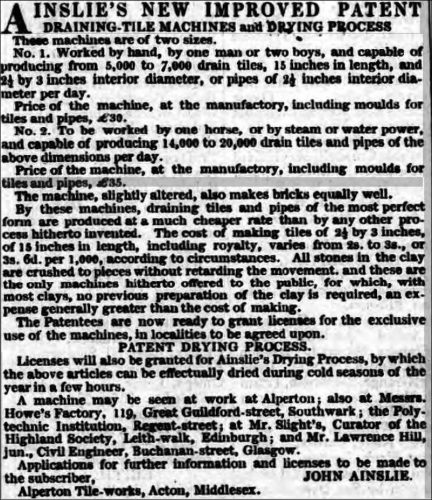 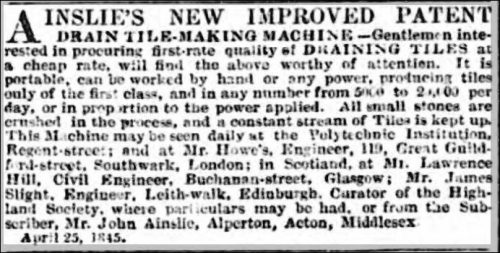 1845 – The Gardeners Chronicle and Agricultural Gazette – Highland and Agricultural Society – At the monthly meeting of this Society, held on April 2nd, the drain-tile making machine, invented by Mr Ainslie, now of the Alperton Tile-works, near Acton in Middlesex, was the first subject of consideration.  Mr Slight observed that in the early stages of drain-tile manufacture the process of moulding was done by hand labour alone when three men could produce not more than 1500 tiles a day.  As the demand for tiles increased, machines of important character appeared and increased the production to 3000 tiles a day from the same number of hands.  At this particular period, the celebrated machine of the Marquis of Tweeddale was brought out, and it formed quite an era in tile-manufacture, producing with ease 10,000 tiles a day.  But up to this period, the operation of moulding was performed by a series of manipulations, or of distinct processes.  the piece of clay, for example, was first spread out into thin cakes by various means, and then bent into the arch form, either at once, as in the hand process, or gradually, as in the Tweeddale machine.  The effect of this forcible bending of the clay was to form rents the back of the tile, to obliterate which another process was required-namely, the smoothing the back of the tile with its moistened hand, or in machine moulding, by a member of the machine acting as an artificial hand, but, in either case, the tile was left in an imperfect state.  To Mr Ainslie, as Mr Slight farther observed, we were indebted about five years ago for the introduction of a machine which could mould tiles by a direct process giving them the proper form at the instant of production, with a uniform compact fabric, not liable to flaws and defects.  Mr Ainslie procured letters patent for his invention, although its leading principle was not new.  So decided, however, was the superiority of the direct method of moulding, that numerous patents have since been brought out, in which this leading principle is the chief feature.  Mr Ainslie’s new patent machine consists of a pair of plain iron rollers, between which the clay is passed from a feeding-board ; and such is the adhesion between the clay and the rollers, that it is drawn in with sufficient force, not only to fill a small chamber, bounded in front by a plate having apertures in a continuous stream of tile or pipe, as the case may be, and as it passes along upon endless webs it is cut in lengths by an ingenious though simple apparatus, which carries a cross wire that makes the cut at the proper length, cutting the tile upward square off, without stopping its forward motion.  the machine exhibited sends out two such streams, by the power of two men at the rate of 6000 tiles, each 15 inches long, in 10 hours.  The power of the machine is enlarged by increasing the number of streams of tile projected, and not by increasing the velocity of the machine ; exclusive of the power, the machine can be worked by a man to feed in the clay, and a boy to take away the tiles, or with two boys to take away the tiles from a large machine.  In the present case of the hand-machine, four individuals in all are required to carry out the process.
14/10/1845 – Fife Herald – Highland and Agricultural Society show at Dumfries – For approved patented articles not coming within the range of any of the foregoing articles – To John Ainslie, Alperton, Middlesex, for his patent hand drain tile machine,  the medium gold medal or 5 sovereigns.
Below – 17/01/1846 – Farmers Gazette and Journal of Practical Horticulture 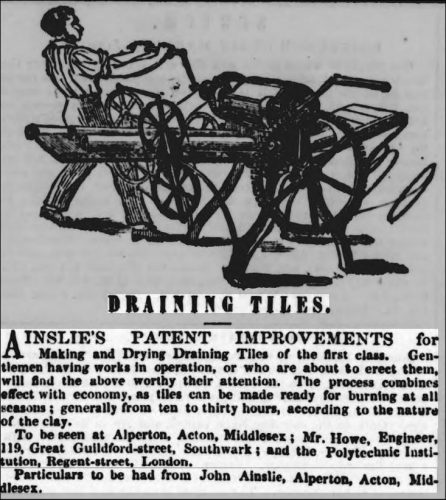 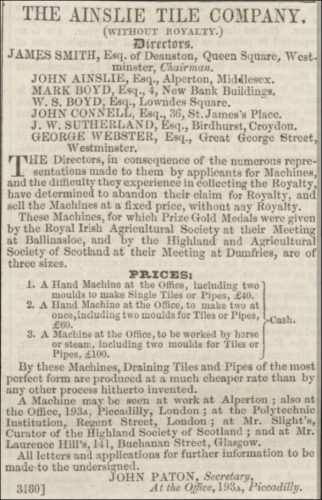 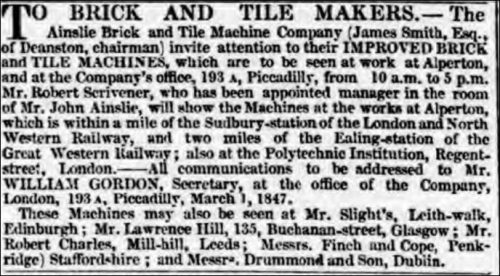 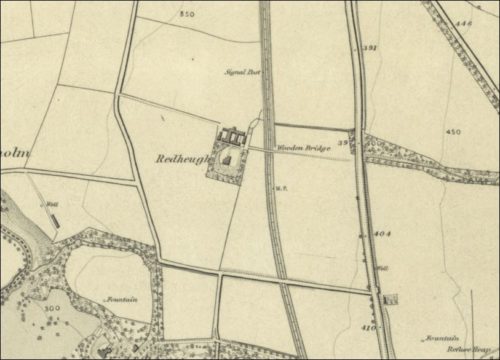