1996 – In spring of 1996 Ibstock announced plans to acquire the brick operations of building materials company Redland for £160 million. The deal, which involved 17 brick factories, four stone products facilities, and clay reserves to last 35 years, had the potential to catapult Ibstock into the lead in the U.K. brick market, with a market share of about 35 per cent and the capacity to produce 1.3 billion bricks annually. The company’s market share was knocked down, however, by the Office of Fair Trading, which asked Ibstock to sell or close factories that produced four per cent of the market demand, amounting to about eight factories, in order to avoid a referral to the Monopolies and Mergers Commission. Still, Ibstock was able to maintain a market share of about 31 per cent, placing it on equal footing with Hanson. Though Ibstock became a market leader with its purchase of Redland’s brick facilities, the company continued to face difficult times …

01/02/2000 – Planning application by Ibstock Scottish Brick Ltd, Old Edinburgh Road, Uddingston for the removal of a clay stockpile at Mossband Farm, Nr Newhouse. (Note – SBH – See link for the full details but some relevant points are copied below)

General
(a) The previous site operator (Cochrane Mining Lanarkshire Ltd) went into administration in September 1998 and the site was dormant for around 6 months.
(b) The site was taken over by Lothian Mining Ltd in spring 1999.
(c) Lothian Mining have continued to operate beyond the December 1999 time limit for the site operations. They have given an undertaking to stop extraction works at the end of April and
appropriate powers have been authorised by the Council to ensure that this is adhered to. 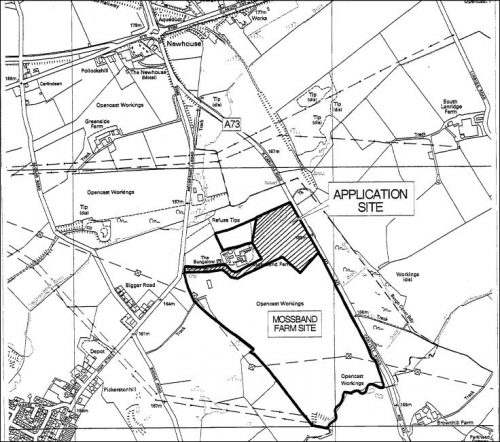 COMMENTS This application relates to the removal of 500,000 tonnes of fireclay from an 1 1 .0 acre (4.4 hectare) site at the Mossband Farm opencast site near Newhouse. The clay is stored above ground in a recently created stockpile using material gained from the adjoining opencast site. This would be removed over a ten year period and used for brick making at the Ibstock factory at Tannochside, giving the factory a consistency and guarantee of supplies. Whilst I do not have any objections to the principle of this development, I do have concerns regarding the proposed
ten-year timescale, which on top of the nine-year lifespan of the opencast operations is considered to be an unacceptable burden on the amenity of the area and the enjoyment of nearby residential properties. Initially, five years would appear to be a more be acceptable, with the prospect of a further five years if the applicant can demonstrate that the operation has been carried out with no serious harm to the environment. The applicant has made strong representations against the imposition of a five-year permission stating that this would not give them the confidence
to carry out a proposed long term investment programme at the Tannochside factory. Rather than refusing planning permission for reason of the excessive timescale, I would recommend that permission is granted subject to a condition restricting it to five years. If the Council are of a mind to grant planning permission, consent would not be issued until a Bond of Caution to an appropriate value had been delivered, guaranteeing the long term restoration of the site. Full details of the proposed development including discussion on the proposal timescale of the
operation can be found within the attached report.
Recommendation- Grant, subject to the following conditions:-
1.That the operations relating to the removal of the clay stockpile shall be commenced within 1 year of the date of this permission, and the applicant shall give the Planning Authority at least 7
days notice of their intention to commence works.
Reason: In order that the Planning Authority might make appropriate arrangements to monitor the operations and to take account of changing circumstances.
2.That all operations relating to the removal of clay from the site shall cease within 5 years from the date of commencement of the development, the date of which shall be notified to the
Planning Authority, under the terms of condition no.1 above or failing that as determined by the Planning Authority.
Reason: To define the permission, to protect the amenity of the surrounding area and to safeguard the enjoyment of local residents and communities.

21/02/2008 – Daily Record … Carscallan Quarry was acquired by Ibstock Scottish Brick two years ago. Clay from the site goes to the company’s Tannochside factory where 65 staff are employed …

Below – Info from Andrew Gemmell

Carron Co. Carron Stirlingshire owned Cadder Mines near the Wilderness Plantation, Bishopbriggs.
Alexandra Transport Co., Alexandra Parade, Glasgow made Cadder bricks from waste out of mines and clay from Blairskaith Quarry in the Parish of Baldernock.
Lots of men lost their lives in a fire at Cadder Mines in August 1913. No 15 pit and 22 men were suffocated.
Bricks then became ATC, Alexandra Transport Company.
Then became Scottish Brick Company.
Then they shut the place and moved it to the Caterpillar Works at Uddingston under the name of Ibstock.
Then they have shut that and I think Ibstock were then bringing their bricks up to Mossend, the Eurocentre.
Tagged with: Ibstock Scottish Brick Limited, Tannochside