02/05/1928 – Kirkintilloch Herald – A new industry – Preparations for the opening of large brickwork have commenced at Bishopbriggs, and already excavations are being carried out. A lease of the ground has been secured from Messrs. Keir and Cawder, proprietors of Cadder estate, by the Mount Vernon Colliery Company, Ltd., 50 Wellington Street, Glasgow. The site adjoins the old No. 14 pit Cadder Moss Cottages, previously worked by the Carron Company. The site, which is also adjacent to Kirkintilloch Road, will give easy access for motor and horse transport. A mineral railway, which is about three miles in length, and previously worked by the Carron Coy., is still intact. The railway connects with the L. and N.E. Railway, at Cadder Yard, between Bishopbriggs and Lenzie Stations. It also crosses the Forth and Clyde Canal, by means of an iron swing bridge, near Mavis Valley, thus giving access to the blaes bings of Nos. 2, 15, and 17 pits, all of which have large stocks of blaes. The quantity of blaes at the disposal of the firm is reckoned to last about 100 years. The opening of this new industry will give work to many of the local unemployed, mostly miners, who have been displaced by the closing down of many of the pits in the district.

07/11/1928 – Kirkintilloch Herald – Water supply to brickworks. At a meeting of the Cadder Water Committee application was considered from the Mount Vernon Colliery Coy., Ltd., for a water supply to their brickworks on Kirkintilloch Road. The committee agreed to a supply being given by meter, subject to the usual conditions, and to the special condition to the provision of a storage tank, and the taking of the water during the night – agreed to by the Mount Vernon Colliery Coy.

19/12/1928 – Kirkintilloch Herald – The new brickfield – The large new brickfield owned by Mount Vernon Colliery Coy Ltd, Moss Cottages, Bishopbriggs having been completed, the company has commenced operations for the manufacture of bricks. The latest brick making machinery has been installed with an improved feeding apparatus for the pan mills. A wire rope haulage driven from the main motor shaft conveys the blaes from an adjacent bing. Hoffmann continuous kilns have been erected with 14 chambers being capable of holding between 12,000 and 13,000 bricks. Electric light has also been installed. From the material, the firm have already secured satisfactory results. A large number of local unemployed have been absorbed and as the work develops, more will be taken on.

27/02/1929 – Kirkintilloch Herald – Accident – While engaged in filling blaes from a bing at Mount Vernons Colliery Company’s Cadder Brickworks, Bishopbriggs on Saturday, Jas Flannigan, 1139 Shettleston Road, Glasgow was injured by a large stone which fell and caught him on the ribs. After receiving medical attention, he was conveyed in an ambulance wagon to the Royal Infirmary, Glasgow where he was detained.

03/01/1930 – Milngavie and Bearsden Herald – Mr John McDowell, (27), a pan mill attendant of Mavis Valleys, Bishopbriggs met his death at Mount Vernon Colliery Company’s Cadder Brickwork, Bishopbriggs on Christmas Eve. Mr McDowell’s duties were to deposit the blaes into the pan mill and regulate the material before it passed into the crusher. Workmen were horrified to see Mr McDowell’s body lying inside the pan mil, his head caught between the side of the pan and a large revolving pinion wheel. The machinery was immediately stopped and the body was released. Death was almost instantaneous. Mr McDowell leaves a widow and young child.

Below – 02/03/1931 – The Scotsman – The Mount Vernon Colliery Co Ltd (In liquidation) – For sale – The following pits and brickworks belonging to the Company including Cadder Brickworks, Bishopbriggs and Barrachnie Brickworks, Baillieston and Broomhouse brickworks …

04/01/1932 – The Scotsman – The heavy rains were responsible for serious flooding at Wester Springfield, Bishopbriggs … Bishopbriggs Brickworks at Moss Cottages was also flooded, the water rising to a depth of 12 inches, both in the mixing house and the brickmaking shed … 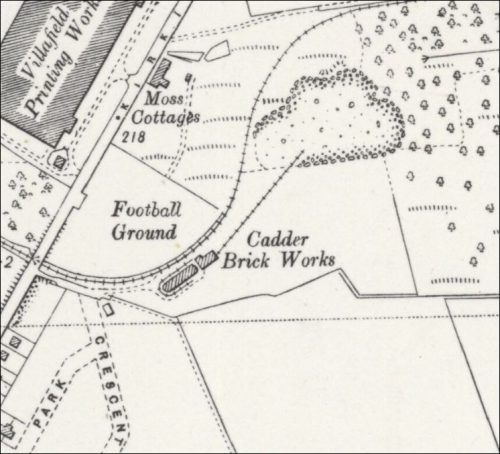 14/10/1935 – The Scotsman – Bishopbriggs firm’s purchase of brickwork. Keir & Cawder Ltd Bishopbriggs have acquired from the Cadder Brick Co Ltd, Bishopbriggs the latters brickwork at Cadder Moss. Opened in 1928 the brickfield is equipped with all the latest methods of production. Messrs Keir and Cawder have also acquired the large blae bings on the Springfield Estate at Bishopbriggs for the manufacture of bricks and commenced to transport the blaes from Springfield to Cadder Moss brickwork.

18/11/1936 – Kirkintilloch Herald – Brickworks transport – To facilitate the importation of the necessary material and also the export of bricks, Messrs Keir and Cawder Ltd, Bishopbriggs have overhauled and relaid the old colliery railway formerly owned by the Carron Company which runs from Cadder yard of the L and NE Railway near Lenzie to their brickfields at Cadder Moss, Bishopbriggs, a distance of about 2 miles. The demand for bricks has necessitated this step and the railway will be used in addition to the present motor transport.

25/08/1937 – Belfast Telegraph – Crushed to death in mill – Youths shocking fate as Scottish Brickworks – Edwin Kerr, (17), brickworker, residing at Stewart Street, Cowcaddens, Glasgow was killed yesterday at the Cadder Moss Brickworks, Bishopbriggs, of Messrs. Keir and Cawder, Ltd. No one witnessed the accident. Apparently he fell into the pan mill used for grinding clay and received terrible injuries. The body was taken to the police mortuary at Bishopbriggs. 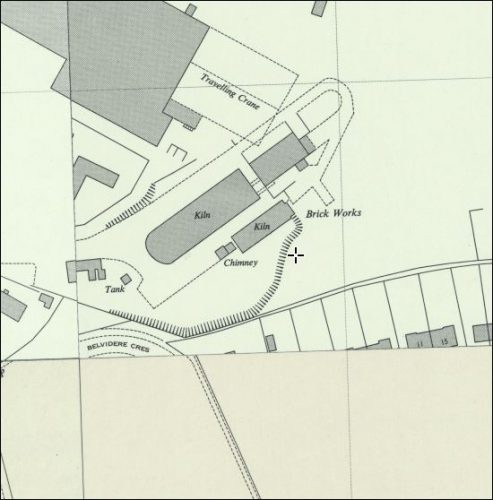 24/04/1946 – Kirkintilloch Herald – Brick production. To meet the demand for bricks, Keir and Cawder, Ltd., Bishopbriggs, have a number of men working Sundays at their Caddermoss Brickfield, Bishopbriggs. The work has been similarly staffed on Sundays during the war, thus enabling the output during the ordinary working days to be maintained. The output at present has risen to 40,000 bricks per day.

16/10/1946 – Kirkintilloch Herald  – Going strong – Working a 2 shift system of 8 hours, Messrs Keir and Cawder Ltd are making 20,000 bricks per day at their Cadder Brickworks, Bishopbriggs. One of the most modern brickworks in Scotland, the firm has discarded the old system of hand loading the bricks from the machine into bogies and then wheeling them to the kilns for burning by the introduction of an electrically controlled conveyor belt. The belt receives the bricks from the pressing machine and conveys them along the top of the kilns where the men and women engaged as ‘setters’ build the bricks ready for burning. Formerly coal was used to assist in firing the kilns, so as to obtain the necessary heat but, to meet the coal situation, the firm have introduced oil instead of coal. Bricks ready for disposal, which were previously hand loaded into bogies are now loaded directly into the awaiting vehicles by a travelling conveyor which is movable from kiln to kiln as they are ready for emptying. Through the above methods, much laborious handwork has been eliminated and in addition, a speedier output is maintained.

13/11/1946 – Kirkintilloch Herald – Sounds in the night – A car backfiring may have started the scare which set detectives and police speeding to the Cadder Brickworks, Balmore early on Tuesday. A burner at the brickworks told the police that he had heard two voices in the darkness speaking with what seemed to be a foreign language and then two reports, like revolver shots. Police, however, reported later that they found nothing suspicious in the area.

March 1957 – The British Clayworker – Keir & Cawder introduce 3-Hole Brick. (Note – SBH – I have added this Keir and Cawder entry here to make sure it is recorded as I am uncertain which Keir and Cawder site it relates to).

Substantial sales are reported of the three-hole perforated brick recently introduced by Keir & Cawder Ltd., of Glasgow.  It is a pressed brick, and the company claim that it is probably the first pressed perforated brick to be manufactured on a commercial scale in the United Kingdom.  The brick is 2 7/8 in. Popular in the North as the nominal 3-inch brick and the perforations are approx. 7/8 in. diameter.  It is claimed to be of improved strength and insulation, and naturally of less weight.

Apart from an improved performance by such bricks in the normal type of structure, the perforation system allows scope for further study of the application of pressed bricks to reinforce work.  By insertion of reinforcing steel rods through the perforations, such bricks should provide scope for use in the construction of load-bearing walls, for lintels and other structures where unperforated bricks cannot at present be adequately used.

The makers claim that these bricks give a saving in weight of more than 1/2 ton per 1,000 in finished brickwork.  Tests carried out in the company’s technical and research laboratories have shown crushing strength is higher than in normal solid clay bricks.  It gives improved bonding with mortar because of the key qualities of the perforations.

Scottish builders, contractors and consultants were introduced to mechanical handling of packaged bricks of a very successful demonstration staged at the Bishopbriggs works of Messrs Keir and Cawder. Ltd., and at Ballock, where, Blackburn, Dunbarton Ltd., demonstrated the receiving end and actual construction using packaged bricks and the necessary related techniques.
The methods used were those already demonstrated on packaged handling of building bricks, based on practical work on multi-storey construction. Scottish interest stems from the growing amount of multi-storey housing work now projected and in the connection, Group Captain R.C. Hockey. Director of Blackburn confirmed his company’s intention to use these methods on their coming Paisley contract.  Blackburn have been interested in the packaging and mechanical handling of bricks for some considerable time and out interest is now doubly keen: after building 30,000 bungalows, two-storey houses and three-and four-storey flats since the war, we are about to commence at Paisley the first 15 storey flats to be built in Scotland.  The basic construction of these flats is reinforced concrete, but the whole of the outer cladding will be brick and some one million bricks will be used in the six blocks of flats to be built under the contract.  The brickwork will be completed in eight weeks: 20,000 bricks will be laid each working day, even at top floor level.  120 ft. Above ground level.  All this would be impossible without a system such as this.
Another advantage he foresaw was the ability to take packaged bricks directly from the lorry to the upper floors in a congested construction area, saving ground-level space for other materials.

He also anticipated the elimination of the 10 per cent loss or wastage through breakage of bricks in under the present methods.  The fullest advantages would only develop through the decreased cost of packaging at the brickworks, and that in turn demanded wider use of the packaged brick system.

At Bishopbriggs the company saw bricks coming from the kiln being packed by the Signode system, being loaded by a variety of the DSIR specially designed barrow units and the use of ramps, and other special gear.

At Balloch, the reverse process was shown the unloading by barrow and elevation by mobile crane to the building level.  Col. K.G.H. Fryer of the DSIR, outlined the techniques used, and among the large number of interested principles were Group Captain R.C. Hockley, Director of Blackburn; G. O. F. Kynaston of Keir and Cawder; Andrew Ritchie, brickworks manager, Keir and Cawder; and H. M. Llewelyn. of the Building Research Station, Thorntonhall.

1969 – Works taken over by the Scottish Brick Company.