03/10/1936 – Dundee Courier -New Scottish Companies –  Garrallan Brick and Tyle Co, 171 West George Street, Glasgow, to acquire assignation a lease of certain coal seams and other minerals lying in and under the lands Garrallan, in the parish of Old Cumnock, Ayrshire. Capital, £65,000 in shares £1 each.

Below- 03/10/1936 – The Scotsman – Garrallan Brick and Tile Company Limited, 175 West George Street, Glasgow. Private Company to acquire from John McCracken, coalmaster of Glenburn, Airdrie, an assignation of lease entered into between John Douglas Boswell and him of certain coal or seams of coal lying in and under the lands of Garrallan in the parish of Old Cumnock, Ayrshire and to carry on the business of brick manufacturers, colliery proprietors and dealers in bricks, coal and minerals of all kinds. Capital £65,000 in £1 shares. Subscribers Frank G Orr, brick manufacturer, 3 Hatfield Drive, Glasgow and Mark Hurll Jun, Manufacturer, 144 West Regent Street, Glasgow. 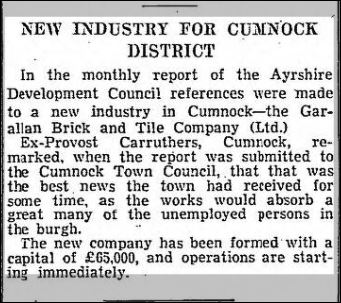 27/10/1937 – Dundee Courier – James Mahon jailed for embezzling money which had been given to him to purchase shares in the Garrallan Brick and Tile Co.

Below – 1938 – The Garallan area – although no reference to any brickworks. 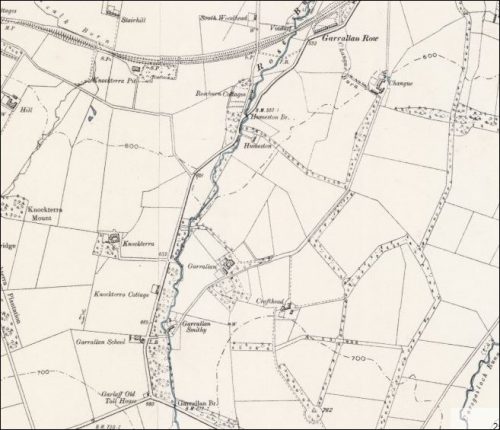 09/09/1939 – Dumfries and Galloway Standard – Registration of Coal Consumers. Garallan Brick and Tile Company Limited, Cumnock, would be obliged if persons desiring to be registered with them would notify them without delay by postcard, or by furnishing canvassers or drivers with name and address, stating definite day of the week for delivery and quantity desired.

Jimmy Begg makes the following observations – Garallan Row is on the Skares Road just outside Cumnock – and Garrallan Colliery was first sunk in 1907 by the Carriden Coal Company. This then became the Garrallan Coal Company in 1917, which was then sold to the Banknock Coal Company in 1925, and then became the Mt Vernon Coal Company in 1927. The pit was closed that year, but later reopened and was finally closed in 1960. Something tells me that it may have remained as a private coal company after nationalisation in 1947, but I’m not sure about this.  It may also be that the Garrallan Tile and Brick Company of 1936 was associated with the re-opened colliery,