(Note – SBH – The brickworks situated in the Nethercommon area of Paisley are often difficult to separate when trying to ascertain which piece of researched information should be allocated to which brickworks. The same goes for conclusively determining which location on the old OS maps refers to which brickworks. If anyone notices any error or has any relevant suggestions then please get in touch. The brickworks concerned are Shortroods Brickworks, Glockston Brickworks, Galts Nethercommon Brickworks, North Caledonia Brickworks, Caledonia Fireclay Works and the Caledonian Brick and Drain Tile Works).

08/01/1844 – Glasgow Herald – Winter Circuit Court of Judiciary  05/01/1844 – Thomas Dollan and Marion King were accused of assaulting and robbing a brick and tile maker in Paisley. From the evidence, it appeared that the assault took place near Nether Common Brickwork and that the party assaulted had been severely handled. The prisoners pleaded not guilty but were found guilty as libelled and sentenced each to seven years transportation. (Note – SBH – I am uncertain whether this entry relates to the Caledonian Brickworks but I have added it here meantime to ensure it is recorded).

Below – 05/01/1846 – Glasgow Herald – Notice to persons having a claim against the late Mr James Craig, brick and tile maker, Nethercommon.

20/07/1847 – Edinburgh Gazette – Notice is hereby given, that David Murray, painter in Paisley, has applied to the Commissary of the Commissariat of Renfrew to be decerned and confirmed executor dative qua creditor to the deceased James Craig, brick and tile manufacturer in Paisley, and residing at Nethercommon there. Robert Rodger, agent, Paisley, July 17, 1847.

06/10/1849 – Glasgow Gazetter – Land at Nethercommon for sale. To be sold, by public roup within the Saracens Head Inn, Paisley on Thursday 1st day of November next at two o’clock afternoon, in virtue of the powers contained in a bond and disposition in security. The whole land at Nethercommon near Paisley with exception of the old brickfield which belonged to the late James Craig, Esquire, lying on the west side of the road leading to Inchninan together with the dwelling house on the roadside. The ground which is held by booking extends to about 5 1/2 acres imperial and is well adapted for feuing purposes. Feu duty 3s 6d. Upset price £550 … 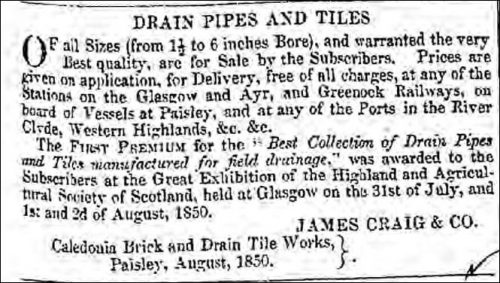 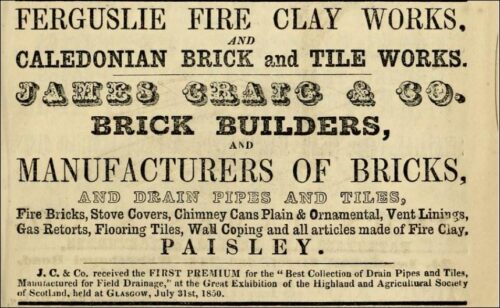 31/03/1853 – Inverness Courier – Sale of chimney cans, vases, mastic &c. To be sold, by public roup, at the Caledonian Brick and Tile Work Store, Petty Street, Inverness, on Friday, the 15th of April next, the whole stock of fire clay chimney cans, vases, pedestals and about five barrels of mastic, in good condition, &c. The chimney cans are from 2 1/2 feet to 6 feet high, many of them of highly beautiful patterns. The vases and pedestals are all richly ornamented; several of them cost originally upwards of £5 5s. Charles Crotchie, auctioneer. Inverness 23/03/1853.

1855 – 1856 – Scotland Places – Very extensive Brick and Drain Tile Works, with the usual drying sheds, kilns, etc. Attached, situated off the Greenock Road and north of Caledonia Lane, bricks and tiles etc. of all sizes and patterns and manufactured at these works. The property of the Burgh of Paisley. Robert Brown Esq the present provost of Paisley is Occupier. 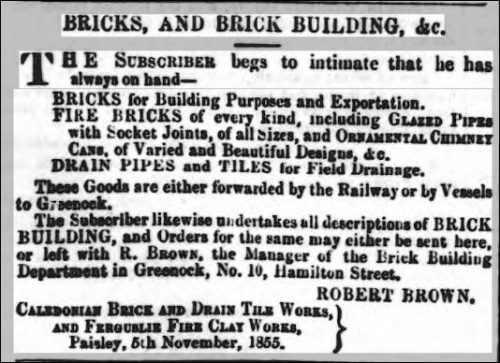 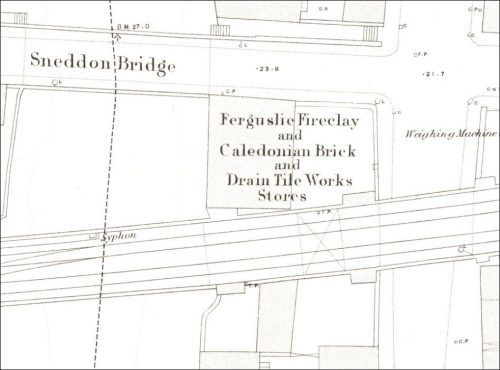 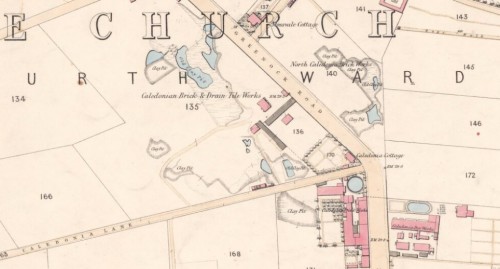 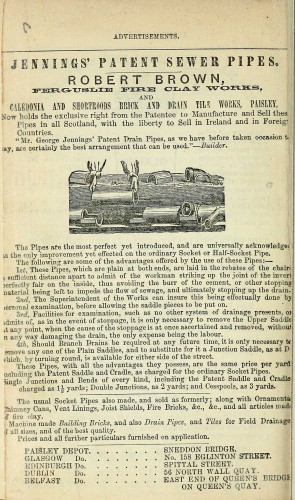 Now holds the exclusive right from the Patentee to Manufacture and Sell these pipes in all Scotland, with the liberty to Sell in Ireland and in Foreign Countries.

“Mr George Jennings’ Patent Drain Pipes, as we have before taken occasion today, are certainly the best arrangement that can be used.” – Builder.

The Pipes are the most perfect yet introduced and are universally acknowledged, the only improvement yet effected on the ordinary Socket of Half-Socket Pipe. The following are some of the advantages offered by the use of these Pipes:-

1st, These Pipes, which are plain at both ends, are laid in the rebates of the chair sufficient distance apart to admit of the workman striking up the joint of the invert

perfectly fair on the inside, thus avoiding the burr of the cement or other stopping material being left to impede the flow of sewage, and ultimately stopping up the drain.

2nd, the Superintendent of the Works can insure this being effectually done by personal examination, before allowing the saddle pieces to be put on.

3rd, Facilities for examination, such as no other system of drainage presents, or admits of, as in the event of a stoppage, it is only necessary to remove the Upper Saddle in any way damaging the drain, the only expense being the labour.

4th, Should Branch Drains be required at any future time it is only necessary to remove any one of the Plain Saddles, and to substitute for it a Junction Saddle, as at D which, by turning round, is available for either side of the street.

These pipes with all the advantages they possess are the same price per yard including the Patent Saddle and Cradle, as charged for the ordinary Socket Pipes.

Single Junctions and Bends of every kind, including the Patent Saddle and Cradle, charged as 1 ½ yards; Double Junctions, as 2 yards; and Cesspools, as 3 yards.

The usual Socket Pipes also made, and sold as formerly; along with Ornaments, Chimney Cans, Vent Linings, Joist Shields, Fire Bricks, &c., &c., and all articles made of fire clay.

Machine-made Building Bricks, and also Drain Pipes, and Tiles for Field Drainage of all sizes, and of the best quality.

Prices and all further particulars furnished on application.

31/10/1867 – Glasgow Herald – Renfrewshire County meeting – The committee minutes showed that Messrs Robert Brown & Son of the Ferguslie and Caledonia Fire Clay and Drain Tile Work have made an application to be allowed to make a railway crossing on the Barnsford Turnpike Road, from their works at Shortroods, which the committee recommended should be conceded, provided the authorities of Paisley gave their consent to the crossing being made.  Mr Speir of Burnbrae said Mr Brown ought to pay a way-leave for the crossing, as other parties are required to do this. Mr Robert Brown said by his crossing he would take off the road, traffic nearly equal to all the rest of the traffic there. The articles which they carted were not valuable like ironstone, but chiefly consisted of tiles for draining and bricks. After some other remarks, it was agreed that Mr Brown should be allowed to make the railway crossing for which privilege he was to pay £7 10s per annum.

Below – 19/09/1868 – Paisley Herald – The new buildings and street committee – Messrs Robert Brown & Son, of Shortroods and Caledonia Brick and Tile Works, had submitted to the Committee a ground plan of several buildings to be erected by them for another new work between Inchinnan Road and the River Cart, giving notice that the chimney stalk would be 130 feet in height, and also notifying that they intended to cover and divert Bullfauld Burn. The Committee allowed the erections to proceeded with but agreed to give no opinion as to the height of the stalk, and no sanction in regard to the diversion of Bullfauld Burn, that in case existing rights might be affected, Messrs Brown alone might be held responsible.

22/10/1874 – Dundee Courier – Tuesday night and yesterday morning a storm of great violence raged in and around Paisley, whereby considerable damage was done to buildings in course of erection, while the roofs of a number of houses suffered great deal … A side of a small workman’s house, belonging to Messrs Robt. Brown & Son, Caledonian Brickworks, was blown down as was also a brick wall near the same place …

22/05/1875 – Paisley Herald – Daniel Lang, boilermaker and James McGrath, rivetter pled guilty to having stolen 46 feet of lead pipe from the engine works of the Caledonian Brick and Tile Works, Greenock Road, sometime between the 9th and 11th inst and were each sentenced to 30 days imprisonment.

Robert Brown was born at Rainger Home farm, East Kilbride, 15th July 1810. In 1815, his parents moved to Nether Capellie Farm, Neilston, and the boy’s first responsibility was to herd on the braes above Glen Killoch until he reached school age. He was educated at Neilston parish school, and showed an aptitude for Latin and Greek and Arithmetic—the intention being that he should proceed to the University.

This intention was departed from, and came to Paisley in 1827 and had built his home ‘Underwood Park’ on Underwood Road. Subsequently going to Glasgow, he acted for a time as reporter and sub-editor of the Chronicle newspaper, which helped to give a literary bias to his inclinations. In 1834, he was appointed Town Chamberlain to the Burgh of Paisley, and in 1845 was an accountant and share broker in Buchanan Street, Glasgow.

Having acquired the property of Ferguslie in 1850, he founded the Ferguslie Fire-clay Works. The firm originally produced fireclay linings for furnaces, garden ornaments and statuary for gardens and by 1876 the business had expanded to the manufacture of white sanitary earthenware, wall tiles and bricks. Browns Brickworks remained a significant manufacturer and employer until the mid-1970s.

In 1854, he entered the Town Council for the Fourth Ward, and two years after, in 1856 was elected Provost of Paisley, as which he served until 1859. Retired from his term in office he turned to literary work, the result being the publication of a series of works: History of the High Church, History of the Grammar School and Academy, History of Burns Clubs, Memoirs of Paisley Poets, and his greatest work, A History of Paisley, he is also believed to be the author of the ‘Paisley Pamphlets’, a collection of ephemera rich in social history covering the period 1739 – 1893