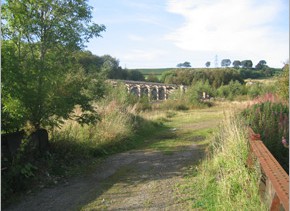 The firm took over the Herbertshire Brickworks but sold the works to the McCaig family. By 1979 many workers were laid off and the original 100 was cut to 50.

Raw materials were obtained from refuse bings connected to Banknock Colliery. The bings were composed of clay and shale which were capable of manufacturing high-quality Cannerton bricks.

Clay was imported from Luggie Bank, Dunbartonshire. This was a high-quality clay.

The Kilsyth & Bonnybridge Railway was used to transport bricks from Cannerton there being two simple staithes to the east of the station which showered bricks directly into railway wagons. Prior to the building of the railway, the Banknock mines were linked to the Forth & Clyde Canal by a waggon way which is still traceable today which roughly followed the line of the Bush Burn.

09/08/1933 – Kirkintilloch Herald  – Brickmaking at Banknock – New industry in the district. – (Note – SBH – These works appear to be have been built on the site of the old Banknock Brickworks.)

New Brickworks –  which were opened on Monday at Banknock by the Cannerton Brick Company, Ltd., introduce a new industry to the district.  The works, which are capable of an output of over 150,000 bricks per week, hold out a prospect of welcome relief to an area which has suffered considerably in the resent industrial depression.  The inaugural ceremony was performed by Mrs Anderson, of Myrtle Cottage, Dennyloanhead, wife of Mr James Anderson, chairman and managing director of the Cannerton Company.  There was a large attendance of industrialists and representatives of commercial interests in the district.

1500 Bricks per hour – The raw material for the works will be obtained from the refuse bings connected with Banknock Colliery, which closed down about two years ago.  The bings extended to about 28 acres and are composed principally of clays and shales.  Exhaustive tests have been demonstrated that these substances are of a quality which, when mixed in determined proportions, will yield “composition” building bricks of a very high standard.  Ample provision has been made at the works for storing sufficient material to maintain the plant in full operation for several days, so that the risk of stoppage through unfavourable weather conditions or mechanical breakdown, rendering the work at the bings impracticable, is reduced to a minimum.  The raw material is automatically fed to a grinding mill, where it reduced to an almost impalpable dry powder, and this, in turn, is automatically carried by conveyors to an upper floor.  The output of the brick-making plant is about 1500 finished bricks per hour.  On leaving the machine delivery table the “green” bricks are conveyed directly to the kiln, no preliminary drying process being necessary.  In the kiln, they are burned at a temperature of about 1200 degrees Fahrenheit for seven days, and after being allowed to cool are ready for dispatch.  The kiln contains about 14 chambers each with a capacity of about 15,000 bricks.  The buildings are of the steel frame type with brick panels.  Altogether, the works are capable of an output of over 150,000 bricks per week.  The principal contractors were: -Duncan Stewart (Bonnybridge), Ltd., Bonnybridge (kiln, stalk, brick, and concrete work); Geo. Walker, Sons & Co., Glasgow  (steel frame, general steelwork, tramways, and incidental machinery);  Bradley & Craven, Ltd., Wakefield (brick-making and accessory machinery); and Blackstone & Co., Stamford (engines and generating plant).

The problem of Idleness – Mr Alexander Hendry, solicitor, Denny, introduced Mrs Anderson, who, in inaugurating the works, observed that work was the law of our being.  Without it, nothing could be accomplished.  In these days, however, we were less concerned with the worker than with the work less.  Unemployment was still one of the greatest problems facing not only the individual but the Governments of every nation in the world.  Idleness was the curse of mankind.  It was a canker which ate into the hearts of men and consumed them.  Mr Hendry, speaking later in Bankier House, where tea was served to a large company of guests, observed that the directors, in commencing, the brick-making enterprise at Banknock, had a view on the industrial needs of the district, which had been sorely stricken by unemployment since the closing of the Banknock Collieries.  At the works would be produced an article which was of national importance for the rehousing of the people and for the building of factories which, in turn, would afford employment.  In recognition of the services of Mrs Anderson to the company and as a memento of the inaugural ceremony, Mr Hendry presented her, on behalf of the directors, with a large silver inscribed tray.
An Old Industry – Proposing the toast of “The Cannerton Brick Company,” ex-provost James K. Shanks, Denny, remarked that the opening of the works would mean much more to those in the district.  Brick-making is an old industry.  History told us that the Babylonians made bricks 60000 years ago and burned them by fire, and they all knew that the children of Israel when in bondage in the land of Egypt had to make bricks.  That day they had seen the very latest mechanical method of making bricks by machinery.  Mr Anderson, the managing director, replying, pointed out that the company’s enterprise was the result of many meetings in secret.  The bings were examined and tested, and ultimately it was decided to make a start with the making of bricks.  He observed that the actual cost of the works had turned out to be much less than the original estimate.  When they started negotiations the price of bricks was about 30/- per 1000, whereas now the cost was 40/- so that the financial prospects were bright.  The directors determined, however, that whatever the demand for bricks might be that demand would not interfere with the quality of their products.
11/08/1933 – Kirkintilloch Gazette – Similar article to 09/08/1933 Kirkintilloch Herald article.
Below – 12/08/1933 – Falkirk Herald – Cannerton Brick Company Limited now manufacturing high-class composition bricks.

07/10/1933 – Falkirk Herald – Falkirk area water shortage. Fears of industrial stoppage. In consequence of the prolonged drought, the Falkirk district, in common with other Scottish areas, is suffering from a severe water shortage. A development decided upon by the Stirlingshire and Falkirk Water Board for the purpose of ensuring that domestic users will not have their supplies affected meantime, occurred yesterday, when a number of important district industrial concerns had their water supply cut off or drastically curtailed … It is at the Cannerton Brickworks that the stoppage of supplies will have the most serious effect. Mr James Anderson, managing director of the company, stated that a supply of rainwater would keep the works going for a day and a half. When this was exhausted they would in all probability have to close down and employees would be thrown idle. It was a case of them all hoping for rain to come at once …
Below – 16/11/1934 – Mr James Anderson died on 15/11/1934. 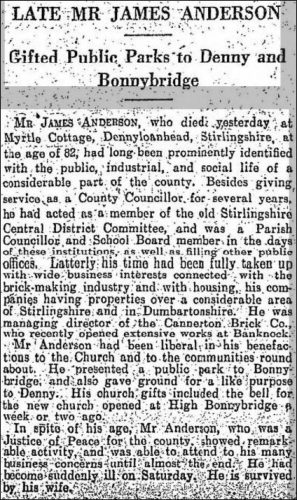 Below – 12/06/1937 – Falkirk Herald – First annual excursion for the employees of the Cannerton Brick Company Limited. 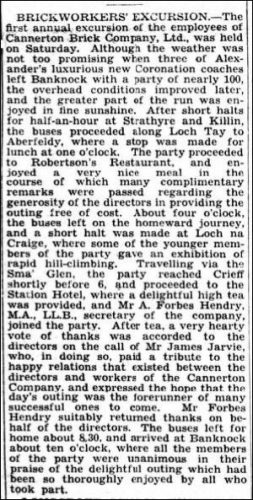 24/07/1937 – Falkirk Herald – Fair holidays – The district of Longcroft, Haggs, and Banknock have been on holiday this week in conjunction with the Glasgow Fair. On Friday Messrs Dobbie’s Foundry closed down for a week, while Castlecary and Cannerton Brickworks closed for only two days, the brickmaking industry at this time being exceptionally busy. Naturally, with such a short holiday, the majority stayed at home but took full advantage of the many and varied day excursions by train and bus. On Wednesday, both Castlecary and Cannerton Brickworks made a full start at the usual hour.
1938 – List of mines in Scotland – Cannerton Brick Co Ltd, 30 Glasgow Road, Denny. Site location – Banknock. Manager Neil Robertson. 45 employed underground and 7 employed above ground.
26/03/1938 – Falkirk Herald – Reference to Mr Robert Manson, manager, Cannerton Brickworks.
08/11/1939 – Falkirk Herald – Miner wanted, experiences stripping coal by contract in machine run. Apply Cannerton Brick Company Ltd, Banknock. 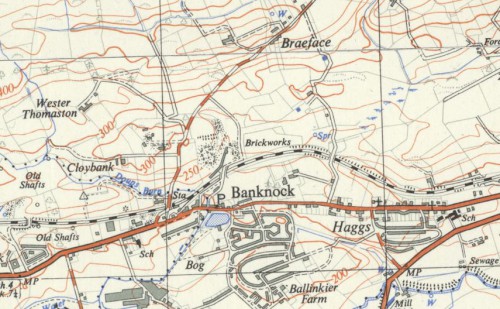 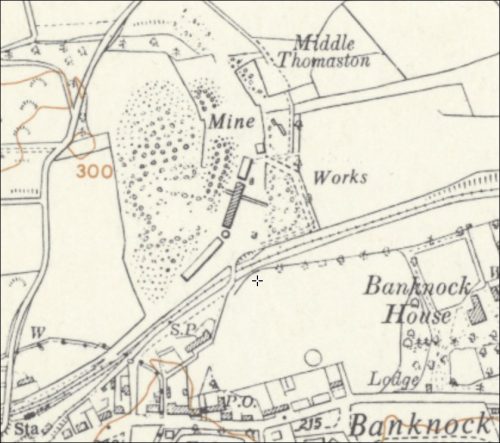 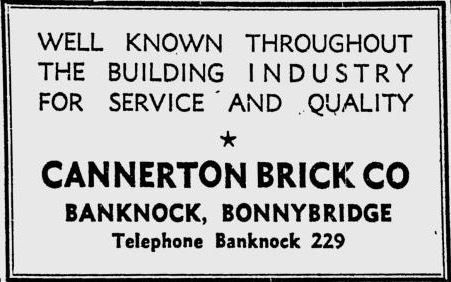