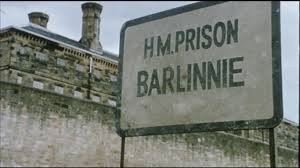 Barlinnie Fireclay Works, Cumbernauld Road, Glasgow – They were situated between HMP Barlinnie and the M8 which runs the route of the now disappeared Monkland Canal (See also Muirhouses Brickworks and Campbellfield Brick Tile and Pottery Works and Strathbungo Brickworks).

15/03/1880 – Dundee Advertiser – New Prison for Glasgow – We understand that the Prison Board of Scotland has just acquired the site for the new prison which is to supersede the old and proverbially and familiar ‘Duke Street’. About 32 acres of the lands of Balinnine adjoining the village of Riddrie and 200 yards south of the Cumberland Road have been purchased from the proprietor Mr Wilson of Campbellfield for the purpose of erecting thereon the vast penal establishment rendered necessary by the increasing number of our criminals and the restricted accommodation of the present Bridewell. Operations are forthwith to be commenced. 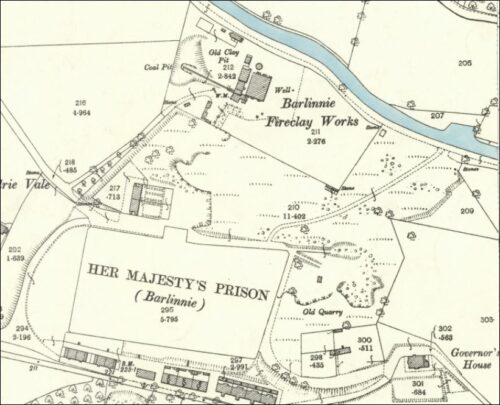 10/07/1896 – Glasgow Herald – For sale the lands of Barlinnie, situated on the south side of the Monklands Canal and east of the Cumberland Road, with frontage to both. The lands extend to about 17 acres. 5 acres at the back are occupied by the fire brick works. The frontage are suitable for Public Works or high-class cottages …

07/10/1896 – Glasgow Herald – The Glasgow Coal and Fire Clay Company Limited has been formed for the purpose of carrying on the business coalmasters, manufacturers of fire clay and enamel bricks and sanitary ware. It has been arranged to acquire the business of Messers John Allan & Sons, Barlinnie Brick Works and the mineral leases they hold on the lands of Barlinnie, Riddriepark, Lethamhill and Hogganfield. The Company largely propose to extend the existing work and arrangements have been made to erect the most improved machinery and kilns. The purchase price has been fixed at £10,000. The vendor has agreed to take £3000 in cash and the balance in shares. The capital of the Company is £20,000 thus leaving £10,000 for working capital. The lists open today.

13/01/1897 – Glasgow Herald – To be sold by public roup within the Faculty Hall, St Georges Place, Glasgow on Wednesday 3rd February 1897 at 2 o’clock afternoon, the lands of Barlinnie situated on the south side of the Monkland Canal and East of Cumbernauld Road with frontage to both. The land extends to about 17 acres. Five acres at the back are occupied by the fire brick works. The frontages are suitable for public works or high-class cottages. Upset price £3400 …