Many thanks to Graeme Cruickshank who gave me details of the 1869 – 1870 entry below which tied in and confirmed that William Wilson & Son was the same William Wilson who operated out of the Campbellfield Brickworks and pottery. (See also Barlinnie Fireclay Works and Muirhouses Brickworks and Strathbungo Brickworks).

28/01/1847 – Fife Herald – Important Railway trial. Methven v The Edinburgh and Northern Railway Company (Note – SBH – There are interesting references here to the subject of this post) … William Wilson, brick and tile maker near Glasgow, has been in the trade for a considerable time. Has had a pretty extensive trade. Has two tile works near Glasgow, and one at Cambuslang. Had had occasion to observe great fluctuation the prices. Had sold drain tiles at 35s and 22s. The witness then went into lengthy details relating to the manufacture of bricks and tiles winch our space does not admit. The Court then adjourned. Saturday, January 23.

20/10/1848 – Edinburgh Gazette – A petition has been presented to the Lord Ordinary on the Bills, by William Wilson of Campbellfield, brick and tile maker in Glasgow, a creditor of Walter Wilson, writer in Glasgow, designed in his petition of sequestration, merchant, residing in Glasgow, formerly a partner of the late firm of Wilson and Leighton, factors and writers there, for recall of the sequestration of the estates of the said Walter Wilson. Of petition for recall, Lord Fullerton, ordinary, on the 19th October current, ordered intimation and answers within eight days, and the intimation to be published in the Edinburgh Gazette, in terms of the statute. Horne and Rose, W. S. Agents for Petitioner. Edinburgh, October 20, 1848.

18/01/1850 and 12/04/1850 – Glasgow Herald – To be sold by public roup – Within the Royal Exchange Sale Rooms, Glasgow on 27/04/1850 at 1 o’clock afternoon,  the following subjects belonging to the sequestrated estate of Mr William Wilson, Campbellfield brick and tile maker in Glasgow. 1. All and whole lands of Campbellfield including part of the lands of Crownpoint lying on the south side of the Gallowgate of Glasgow and near to the Gallowgate Toll Bar, consisting of 6 acres, 23 falls and 20 yards or thereby Scots measure as the same has long been possessed by Mr Wilson as a brick and tile work, together with the dwelling house and offices, brick and pottery works and whole other buildings and erections thereon …

15/03/1850 – Glasgow Herald – Sea coast residences on the Firth of Clyde for sale  – Property of the sequestrated estate of Mr William Wilson, Brick and Tile Maker, Glasgow – WoodlandsHouse, Villa of Bowerbank and Villa of Ardenlee House …

29/04/1850 – Glasgow Herald – Sea coast residence for sale … The beautiful villa of Ardenlee belonging to the sequestrated estate of Mr William Wilson, brick and tile maker in Glasgow and situated in the Bullwood of Dunoon …

26/09/1850 – Caledonian Mercury – Wm Wilson of Campbellfield, brick and tile maker in Glasgow has applied for a discharge. 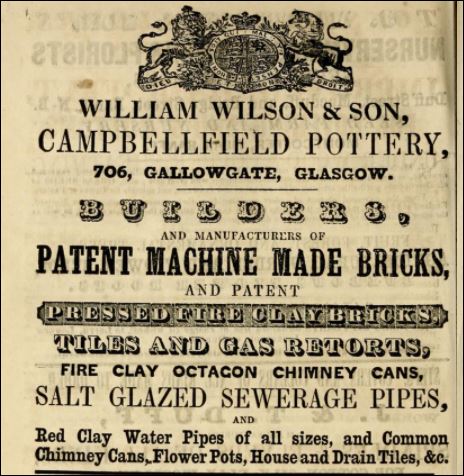 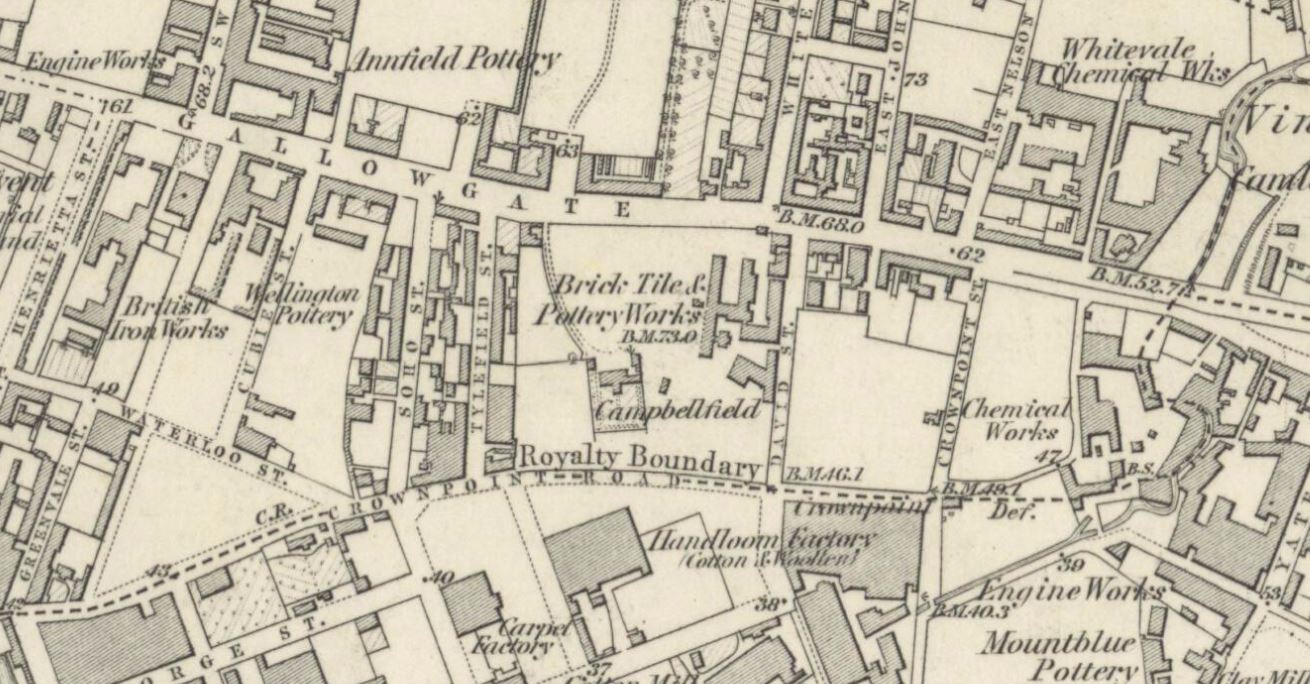 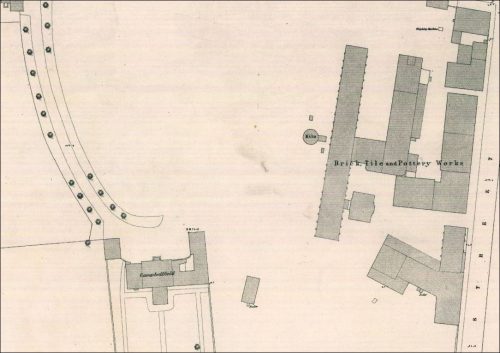 14/06/1862 – Gravesend Reporter – The International Exhibition, London. Brickmaking machines … Another dry clay brick machine is exhibited by Mr William Wilson, of Campbellfield, Glasgow, in which the dry pulverized clay is prepared for the pressure it is intended to receive being conveyed through a chamber filled with steam, where it is partially softened and rendered plastic by the condensation of the steam to such a degree is deemed necessary, and then only a moderate pressure is required. In the kiln, it is found that bricks made by this machine have no tendency to fly to pieces, as is the case with many modes of brickmaking …

22/10/1869 – Glasgow Herald – Campbellfield Pottery to be sold or let. The clay, being exhausted, this Work will now be converted to suit a tenant. There is a 15hp engine and boiler,  gearing etc on the ground. Apply to Robert Leiper at the Work or William Wilson, 51 Buchannan Street. 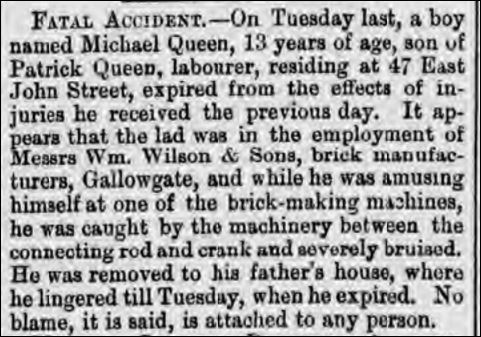 28/12/1874 – The Scotsman – Court of Session – Todd v MacKenzie and others – During evidence giving Hugh Mackintyre, brick manufacturer, Glasgow stated that he was a partner in the firm of Wm Wilson & Sons (Note – SBH – this is possibly the same company as per this post and this could also be a reference to Hugh McIntyre who later operated such works as the Toryglen Brickworks).

15/03/1880 – Dundee Advertiser – New Prison for Glasgow – We understand that the Prison Board of Scotland has just acquired the site for the new prison which is to supersede the old and proverbially and familiar ‘Duke Street’. About 32 acres of the lands of Balinnine adjoining the village of Riddrie and 200 yards south of the Cumberland Road have been purchased from the proprietor Mr Wilson of Campbellfield for the purpose of erecting thereon the vast penal establishment rendered necessary by the increasing number of our criminals and the restricted accommodation of the present Bridewell. Operations are forthwith to be commenced.

The last of this class which we shall notice is the dry-clay machine of Wilson, of Campbellfield Brickworks, Glasgow, which was exhibited in action at the Exhibition of 1862.

The peculiarity of working of this machine is, that the dry and pulverised clay prepared for being made into brick is carried along automatically to the hopper, and, just before being delivered into it, is subjected to being blown upon by the waste steam discharged from the non-condensing engine which drives the machine. The result is a slight condensation of steam on and in the pores of the clay, and a slight warming of the clay itself. From this arises a much-increased tendency to rapid and perfect agglutination in the clay when submitted to pressure in this state, between wet and dry, and a much readier expulsion of the air involved in the mass. There is not the slightest doubt of the great advantage derived from this very simple mode of treating the dry clay prior to compression. There are several contrivances in Mr Wilson’s machine, as to details, also of value, especially one by which the maximum pressure possible
is so regulated that the destruction of the machine is guarded against.

One great improvement yet remains to be made to render perfect dry-clay brickmaking machines, namely, to adapt to them the same method that was employed by Mr Brockedon in his patent for compressing dry powder of plumbago into a dense and solid block to be sawed into pencils, namely, the operating the compression in a vacuum, so that the air involved between the particles of dry clay (or dust, if quite dry) being thus extracted, the mechanical pressure is free to act fully and solely in producing condensation and agglutination of the clay particles. Source

Staff from AOC Archaeology Group have uncovered remains associated with the Campbellfield Pottery during fieldwork in Glasgow’s East End. Evaluation trenches excavated at the site at David Street revealed what may be the base of one of the kilns. This work was undertaken as a condition of planning consent on the advice of the West of Scotland Archaeology Service.

The Campbellfield pottery was operated at this site by William Wilson (1827-1849), a partnership (1849-1856), William Wilson Jr. (1856-1874), and William Rankine Currie (1874-1881). Its various buildings and structures were depicted on the 1st edition Ordnance Survey map of 1861, an extract from which appears at the top of this article. On this map, it is possible to identify a round structure standing separate from the other buildings, possibly representing a kiln. The Campbellfield Pottery Co. Ltd. moved production to a site in Springburn in the 1880s and ceased production in 1901. The site of the pottery was extensively landscaped during the 1970s, but it was felt that solidly constructed structures such as kilns could have survived this process, and this proved to be the case. Evidence of kiln furniture, plus a number of wares marked with the Campbellfield stamp, has also been recovered from the site.

Following the identification of what appeared to be a kiln base during the evaluation, an additional phase of fieldwork was undertaken on the site. A larger area was opened around the possible kiln structure, both to look for additional structural evidence, and to explore the possibility that sherds of waste pottery may have been dumped into the pits from which clay had been extracted. This phase of work is nearing completion, and a report outlining the results will be submitted in due course. Source