20/04/1877 – North British Daily Mail – Suburban burghs. Crosshill – new works in the vicinity. Several works have just been begun in the near neighbourhood of the burgh, which will add nothing to its salubrity. At the eastern extremity of the road leading directly from Queen Mary’s Avenue, in the low grounds below Mount Florida, a large brickfield is commenced by Mr Allan Mann, and another in close proximity by Mr Hugh Mclntyre. With those already established on the opposite side of the Polmadie Road, the inhabitants of Mount Florida, particularly in the east end, will certainly have the full benefit of the undesirable fumes when the kilns are lighted, whenever the wind blows from the eastward, which is generally about a third of the year. Another brickwork is in course of formation by Messrs Gilchrist & Goldie, who have long carried on this business at Sandyacres, on the old Langside Road. It is situated on Coplawhill, close to the east side of Victoria Road and immediately south and to the rear of the Victoria Swimming Baths. The lands are the property of the Glasgow Corporation, and were for many years occupied by Messrs Austin & McAuslane as a part of their nurseries, but have been leased by the above firm, who are at present erecting an engine-house and other necessary buildings for prosecuting the work. It was imagined that feuing for house-building would have begun there before now, but the formation of this work must postpone such for an indefinite period … (Note – SBH – I believe the reference to Hugh McIntyre relates to the Toryglen Brickworks) 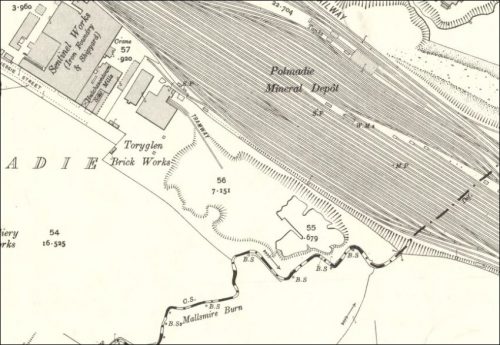 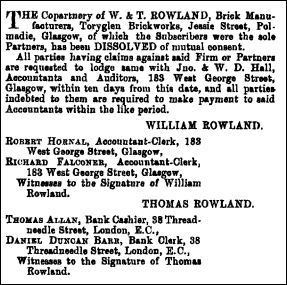 1935 – These brickworks no longer exist.