Messrs Barclay, Craig & Co, Kilmarnock were involved in the building of the Lonsdale Hematite Ironworks near Whitehaven, England and also an on-site brickworks.

Below – 31/05/1870 – Carlisle Journal – Messrs Barclay, Craig & Co, Kilmarnock fail to secure a site for a new ironworks near Maryport. 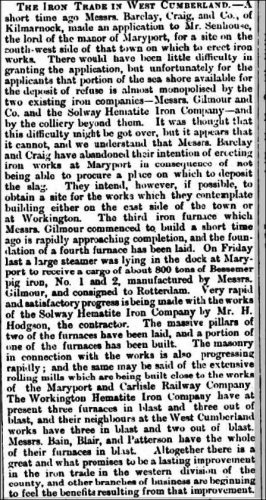 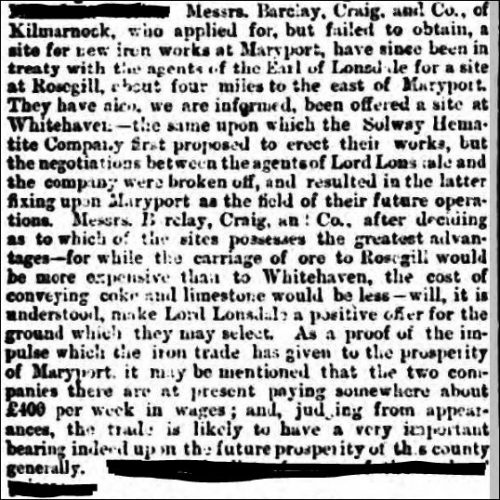 Below – 02/08/1870 – Carlisle Journal – New Iron Furnaces in Whitehaven – Messrs Barclay, Craig & Co, Kilmarnock arranging leases for land on the Estate of the Earl of Lonsdale at Rosegill,  some 3 to 4 miles East of Maryport and the other at Bransty. It appears the Bransty site is the more favourable. 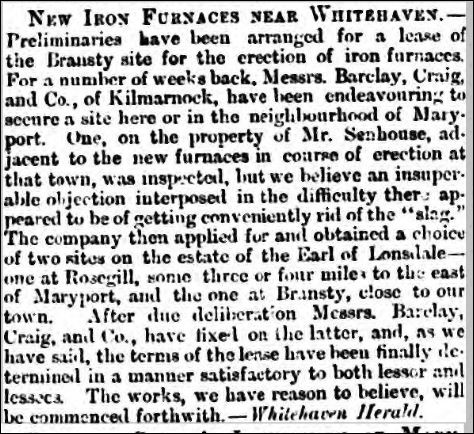 Below  – 26/09/1870 – A letter dated signed by Mat Craig and written on headed notepaper – J & M Craig, Works – Hillhead, Perceton and Dean. Office at Hillhead. Fire Clay Factories and Hillhead Colliery, Kilmarnock – fire bricks, furnace blocks, gas retorts, flooring tiles, sewerage pipes, cattle troughs, chimney cans, flower vases, fountains and other terra cotta goods in great variety. The letter from Mat Craig of J & M Craig to Mr T.E. Forster appears to corroborate the fact that Mat Craig is connected to Messrs Barclay, Craig & Co involved in the erection of an ironworks and brickworks between Whitehaven and Parton. Mr Forster is believed to be an agent acting on behalf of the landowner, the Earl of Lonsdale.

On Thursday morning I called to see you but learnt from Mr Lamb Esq, that you had gone to the above address and at his suggestion, I now write to you. As you are (I understand) taking your holidays, I am very sorry indeed to trouble you but as time is so very important to us, I trust you will excuse me on this occasion.

My intention was to begin immediately and erect a shed on the ground coloured purple, between North end of tunnel and Parton, for the purposes of making bricks but in walking through Parton on Wednesday week, I notice that you have a large shed at the coal depot there standing vacant, and it occurred to me, that was this shed rented to us at a reasonable sum, that it might be an advantage at once to us and to Lord Lonsdale. I would therefore humbly submit for your approval

(1) That we become tenants of the shed referred to for the purpose of manufacturing fine clay, the shed is about 120 feet long by 40 foot wide.

(2) That the space on each side of the shed be given us for the purpose of fitting up a small engine and clay mill with kilns as necessary in connection with the manufacture of the clay.

(3) That we be allowed to use the water in the immediate locality of the Works.

Considering the size of this shed, and that it is ready for immediate use, I consider a fair rent for it would be Twenty Pounds sterling (£20) per annum, which sum we will undertake to pay for it. Mr Lamb said he thought you might object to giving a lease of it but we will be quite agreeable to be tenants from year to year on the understanding that we get six months notice of removal, and that we be allowed to remove all erections, leaving the premises as at present.

I will be at Whitehaven on Thursday and will gladly run over to Buxton with the plan and see you on the subject and explain all, if you will kindly telegraph to me at Mrs Grayson’s, 17 Hilton Terrace, Whitehaven.

I would like permission to erect a pond in the field above the quarry and as near to face of rock as would be safe, the pond being one-fourth of an acre in area, paying for the ground so occupied double a price usual rent.

PS -If you have any time spare of good quality we will be glad to ? with you for it. M.C 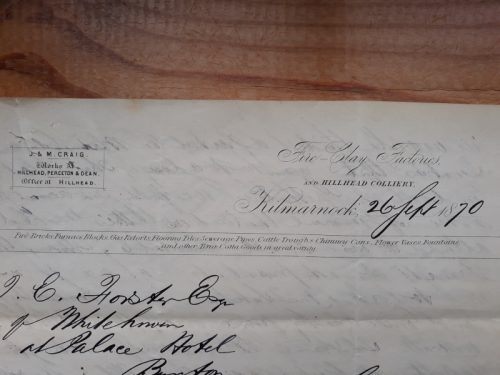 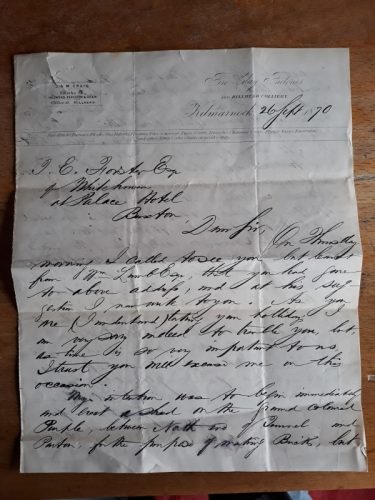 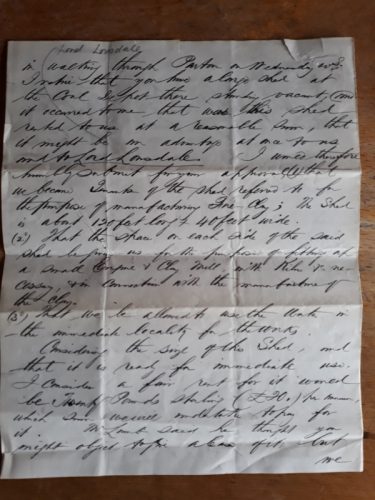 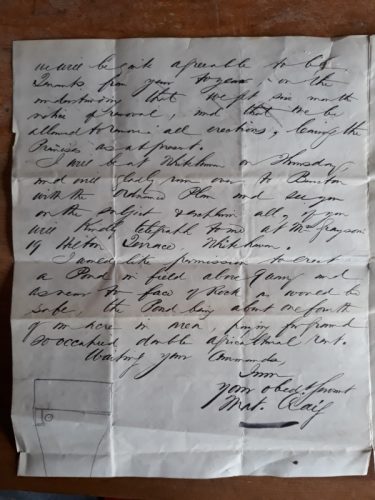 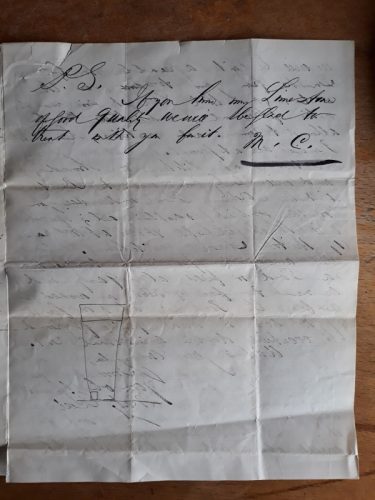 07/10/1870 – Carlisle Patriot  – The Lonsdale Hematite Iron Company, says the Whitehaven Herald, have broken ground Bransty for the iron furnaces they intend to erect there. The site of the works runs from the Whitehaven end of the old coke ovens near the railway tunnel; but the company have, in addition, secured a strip of ground extending alongside the Junction railway to near Parton for railway accommodation. One furnace will be erected forthwith and is expected to be in blast next March, but they are preparing for three more. Besides the furnaces, the Company intend to make bricks between the site of the furnaces and Parton there being excellent fire-clay on the spot. The brick-making machinery will be fitted up immediately.

31/10/1870 – Newcastle Journal – To sinkers – Tenders are required for sinking a pit at the Earl of Lonsdale’s Collieries, at Whitehaven. Specifications may be seen at the Office of Messrs T. E. Forster and Co., 6, Ellison Place, Newcastle-on-Tyne. Tenders to be sent there not later than the 7th of November next.—Newcastle-on-Tyne, October 25th, 1870. (Note – SBH – This appears to confirm that T.E. Forster is an agent or legal advisor to the Earl of Lonsdale).

01/11/1870 – Cumberland Pacquet  – At Bransty near Whitehaven, Messrs Barclay, Craig & Co of Kilmarnock intend, we understand, to commence operations with one furnace only. 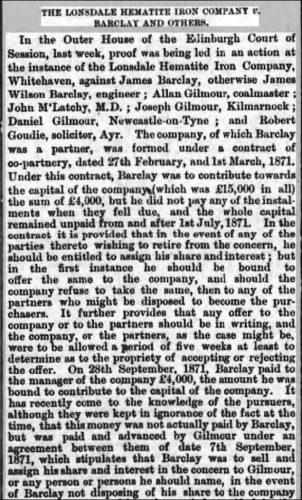 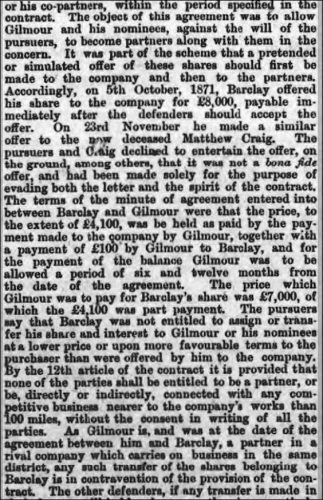 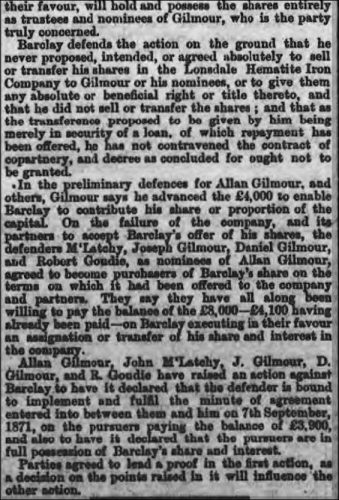 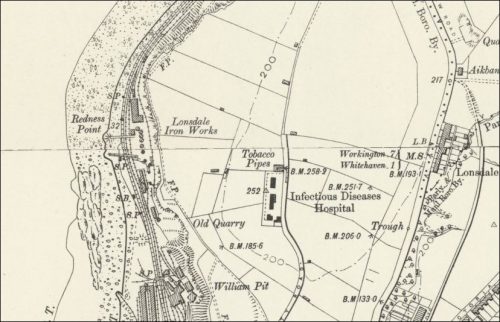