(Note – SBH – I have created separate pages for Perceton, Dean, Hillhead and Longpark. Where information does not relate to a particular works, such as Craig family history, I have added it to the Perceton page.) 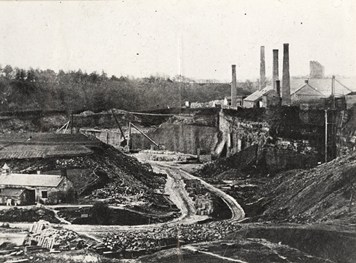 Below – Source unknown – For a long time Kilmarnock was mainly celebrated for the production of bonnets, carpets and shawls, but of late years other trades have sprung up, such as engineering shops, wincey, tweed, and lace manufactories. It is also justly celebrated for the manufacture of fire bricks and other fire clay goods. This latter branch of industry, at the well-known works of Messrs. J. and M. Craig, is the subject of the present article.

The record of the enterprise of this firm might almost be said to be identical with the history of fire clay manufacture in Scotland. More than half-a-century ago — as far back as 1828 — the business was commenced at Dean Quarry, near Kilmarnock, by Mr Matthew Craig, father of the gentleman who is now the senior partner of the present firm. It was a small beginning. The entire plant consisted only of a pair of rollers for crushing the clay, one kiln for burning the bricks, and the necessary moulds, tools, &c. These gave employment to three men and two boys. At first, the motive power was communicated to the rollers from a rotary gin, but this soon had to be replaced by a steam engine with an increased plant. The operations of the firm so limited at the commencement, since then have been gradually but steadily extending and increasing, and they are now carried out on a very extensive scale indeed, in large works at Hillhead and Perceton, covering about six acres of ground and employing nearly four hundred men and boys.

When the Dean Brickwork was commenced there was then no other fire clay work in Ayrshire, and, excepting one or two near Glasgow, none in all Scotland. Now there are nearly a dozen works in Ayrshire, the same number in other parts of the West of Scotland, and about half-a-dozen works in the East country.

Fire clay manufacture at the Dean in those early days was limited to common building bricks—upon which, by the way, a duty of six shillings per thousand was then levied by the government—but by and by the clay was found to be very suitable for the production of other goods, such as compressed tiles for paving the floors of kitchens, entries, &c., troughs for cattle-feeding purposes, and salt-glazed pipes for sewers and for carrying water: to the making of which it was accordingly applied.

By this time several fire clay factories had been started in Ayrshire and various parts of Scotland, but the tact and energy of Messrs. James and Matthew Craig—who had succeeded their father—had gained the confidence of a large number of customers, and their business continuing to increase, they found it necessary, in 1861, to purchase the Hillhead Fire Clay Works, and again in 1862, to take over the Perceton Works. Largely increased means of supply were accompanied and followed by increased demand, and notwithstanding all the fluctuations of trade, the various goods made at these works have been in such constant request, that even with very large additions and improvements to the works of late, some difficulty is still felt in supplying all the orders.

Messrs. Craig have always been very prompt in discerning and opening up new branches in the manufacture of fire clay, improving the old methods of working, and in perfecting the quality of the goods turned out, and are now generally acknowledged to be at the top of the tree in the fire clay line – occupying in Scotland a position somewhat analogous to that of the Messrs. Doulton in England.

The process by which raw, worthless-looking clay, is transformed into valuable building material, or into more expensive and beautifully enamelled goods, is a very interesting one.

The fire clay is found underlying the coal in seams of from eighteen inches to three feet thick and is wrought along with the coal. At Hillhead, four pits supply the material and the fuel, which are conveyed in trucks by rail to the adjacent works. Here the clay is first submitted to the pressure of a grinding mill, and by the large iron wheels revolving on perforated plates, it is quickly reduced to a fine powder. From the grinding mill, it is raised by elevators to a “worm” which transfers it to the mixing pans, where, by the addition of water it is rendered plastic, and ready for the moulder’s benches. In the case of bricks, the clay is cast by hand in strong wooden moulds; and, if intended for common building purposes, the bricks are then dried in stoves, preparatory to being more thoroughly dried and burned in the kilns. If, however, it is intended that the bricks are to be glazed or enamelled, the process is a longer and more intricate one. After having the superfluous moisture removed in the stoves, they undergo an enormous pressure, under the pressing machine, and are then “dressed” by another machine, and after being carefully “finished” by hand, they receive a coat of the enamel in the liquid state and are then ready for the kiln. There the heat is at first applied very gradually but is steadily increased, until it reaches sufficient intensity to thoroughly incorporate the glaze with the body of the clay.

When taken out of the kiln the enamelled bricks are of a brilliant white colour, and we understand they are perfectly impervious to weather, non-absorbent of chemical or other vapours and incapable of being permanently soiled or dirtied. They are admirably adapted for lining back walls, and “wells,” in buildings where reflection of light is valuable, also for lining common stairs and closes, public baths, urinals, water-closets, passages and wards in fever and other hospitals; and generally for any purpose, where it is important to have beauty and lightness, combined with durability, non-absorption of vapours, and easiness to keep clean.

Coloured and printed enamelled bricks are produced in a variety of tints. The enamelled washing tubs, and enamelled sinks for kitchens, butler’s pantries, &c, are also moulded by hand and are very carefully finished and glazed, in the same manner as the enamelled bricks. These washing tubs and scullery sinks have a beautiful appearance; almost equal to porcelain, which, we believe, they greatly excel in strength and durability. Messrs. Craig informs us they are now extensively used in houses of the better class.

J & M Craig Ltd, Kilmarnock – source Kenneth W Sanderson. An advertisement in Slater’s Directory of 1867 claims that the company was established in 1831, which would pre-date the Garnkirk Fireclay Company of Lanarkshire.  This claim is probably based on the Dean Firebrick & Tile Company which was making firebricks on the lands of the Duke of Portland, east of Kilmarnock about this time.  The Statistical Account of 1845 states that the parish of Kilmarnock was making considerable quantities of firebricks which were sold for £4 per thousand.  Hunt’s Mineral statistics of 1858 records that the brickworks produced 4,365 tons a year of firebricks, chimney cans, pipes and retorts.  The Dean area contained an excellent supply of freestone, and this quarry expanded to six acres to supply much of the stone used to build Kilmarnock, and in doing so swamped the fireclay works.  The Kilmarnock Standard of 13th April 1872 has an interesting article on Dean Quarry and states that the first regular lessee was a Mr Law of Messrs Brown & Howie and that the quarry later passed into the hands of Martin Craig, senior, who with his two sons founded J & M. Craig.

The Perceton Fireclay Works at Dreghorn were taken over by J & M. Craig in 1863.  Previously in 1858, they were owned by the freeholder and manufacturer, P. & M. MacReady who produced firebricks, pipes and retorts amounting to 6,552 tons a year: a substantial quantity for those days.  They had agents in Glasgow, Dundee, Perth, Annan, Ayr and Ardrossan, which indicates the local nature of the business at that time.

The Hillhead Fireclay Works at Kilmarnock was taken over by Craigs in 1867 from John Gilmour & Company, who had owned it from at least 1858.  Craig now became the largest firebrick company in Scotland, surpassing the Garnkirk Company; however, they were in their turn soon to be surpassed by the Glenboig Union Fireclay company which was formed in 1882.

The expansion of Craigs continued with the establishment of the Longpark Sanitary Pottery near Hillhead.  The Muirhouse Brickworks near Irvine and the Lillieshill Fireclay Works near Dunfermline were brought into the group in 1896 when the company was incorporated as J. & M. Craig Ltd.  The capital was £50,000, of which well over half was held by James Craig and his sons.  A petition was brought before the Law Courts in June 1906 to dissolve the company as £45,000 of debentures were due for repayment.  Whilst most of the holders were agreeable to extend the term, a minority refused.  Assets were estimated at £127,427, and liabilities at £70,345, so the surplus exceeded the share capital: This led to a reconstruction of the company and J. & M. Craig (Kilmarnock) Ltd. was formed with a capital of £5,000 £1 ordinary shares and 15,647 £1 preference shares.  The company continued to trade up to 1915 but was liquidated the following year.

1855 – 1857 – Dean Quarry – An extensive freestone Quarry worked by Messrs. James & Mathew Craig and is the property of the Duke of Portland and J.G. Parker Esq. of Assloss (the property boundary or March running through it) There is a seam of coal about 16 inches thick and about 4 feet from the surface runs through it which dips greatly to the Westside as the ground rises. Coal is also found in it at a considerable depth, there is a new shaft sunk from which they obtain a sufficient quantity for carrying on the fine brick & tile works connected to it.

Below – 12/06/1862 – Perthshire Advertiser – Alexander Campbell is an agent in the Perth area for J & M Craig, Dean, Hillhead and Perceton, Kilmarnock. 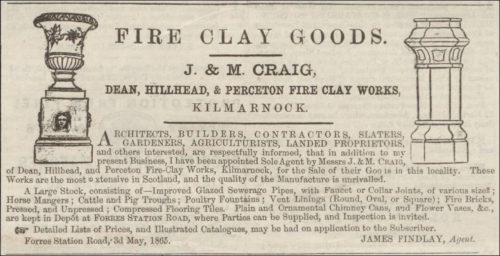 Below – 17/11/1866 – Ardrossan and Saltcoats Herald – James Craig declines the nomination to stand for the council – fake news! 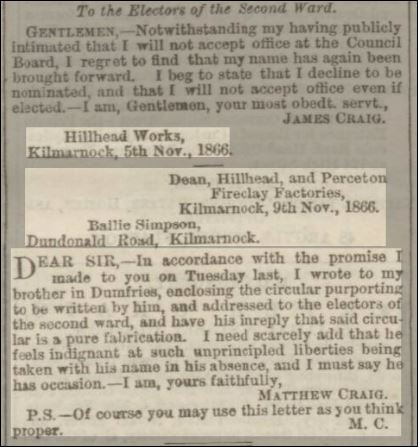 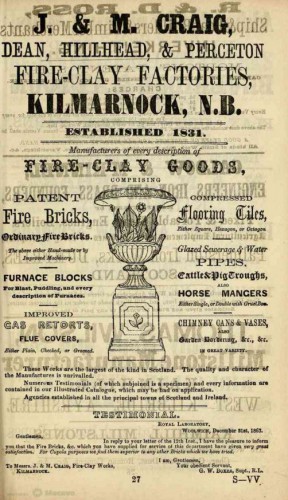 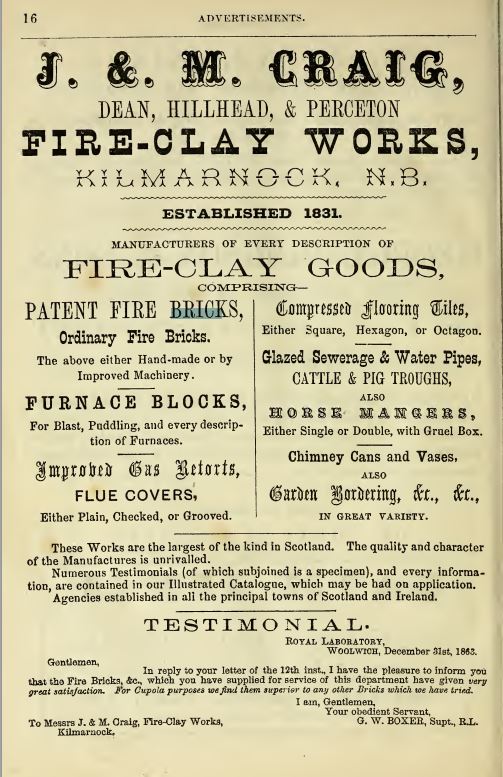 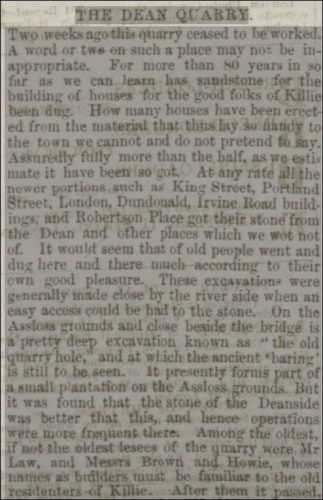 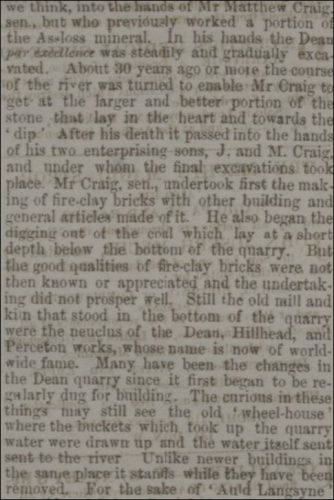 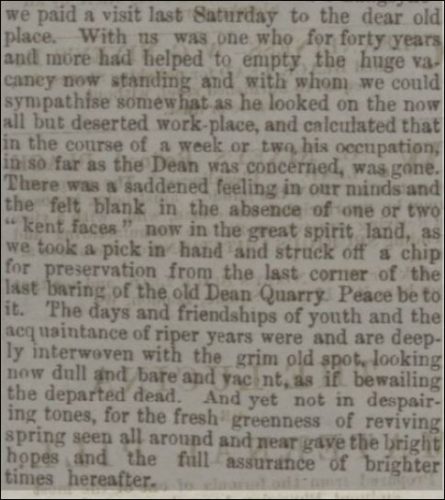 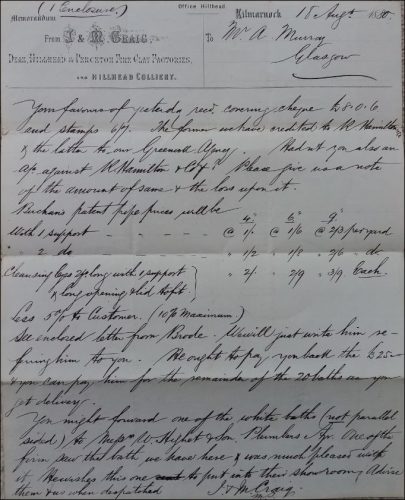