1845 – 1849 – ScotlandsPlaces – 3/4 mile North West by West of Garliestown. A small irregular portion of land upon the farm of Millisle, with clay tempering machine, tile kiln & drying sheds. (Believed to be owned by the Earl of Galloway). 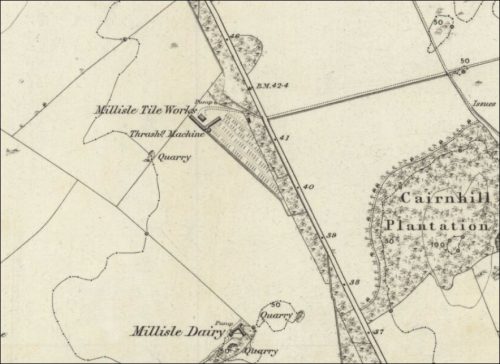 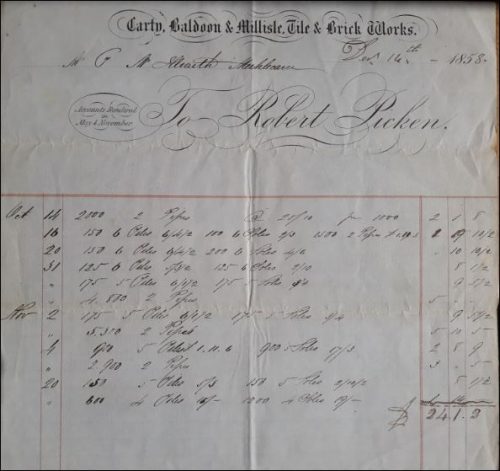 04/01/1860 – Dumfries and Galloway Standard – Garliestown. The curlers of Sorbie Parish met on a loch at Eggerness, on Thursday, the 22d ult, to compete for the splendid silver medal presented to them by their patron, McDuff Rhind, Esq., Culderry House, for the annual competition, and after a friendly and keen contest, it was gained by the rink headed by Hugh Morton, Tilework.

26/05/1864 – Galloway Advertiser – Wigtown Sheriff Court. James Edgar, labourer at the village of Garliestown in the Parish of Sorbie, was accused of theft in so far as on an occasion between the 12th and 20th of April last, from or near a clashed or other building, forming part of the tilework on the farm of Millisle, in the Parish of Sorbie, occupied by Thomas Picken, tilemaker and farmer, residing at Barsalloch, in the parish of Mochrum, he, the said James Edgar, did wickedly and feloniously steal a fecket or jacket belonging to Charles Neil, labourer in Sorbie village. Several witnesses were examined, having pleaded not guilty; but the charge was found proven and Edgar was sentenced to 14 days imprisonment in Wigtown jail, being a shorter period than would otherwise have awarded in respect be had been in prison 8 days already awaiting trial.

Below – 1894 – Millisle Tileworks – Shows the site has expanded to the southeast with a slope in that corner possibly indicating that the clay was being worked near-surface into the adjacent field. Millisle Station was located about a mile from the works; the map shows no tramway seems to have been built. 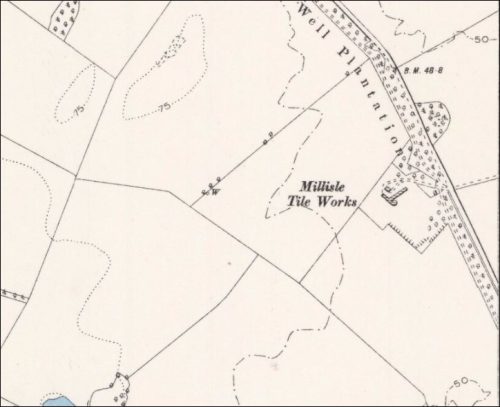 02/05/1900 – Glasgow Herald – Wanted for small tilework, a second-hand brick and tile making plant, one set of rollers with engine and boiler complete. Apply stating price and where to be seen to Campbell Highet, Garlieston, Wigtownshire.

By 1906 the works are marked as disused.