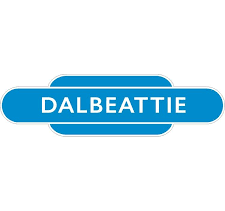 The flood plain of the Urr has excellent deposits of blue clay, which were quarried for brickmaking once imported coal ensured a good fuel-supply. It seems strange that Dalbeattie should make bricks, but the labour cost of working granite is considerable. Many of the so-called granite houses actually have brick in the rear of the structure, indicating a need to cut costs as well as to keep up appearances. It was not until the 1920s and the 1930s that brick became a major part of local building, the town even now preferring the appearance of rendering and granolithic Fyfestone to brickwork. As against that, the writer has to concede that blockwork and rendering are definitely warmer to live in than is granite.

On the corner of Haugh Road and Craignair Street, there is a small recent development of bungalows. This is sited on what was successively a brickworks and then the town’s waterworks. Across the road, a granite-built house stands in the depression that was once a clay pit at a later stage of the brickworks. Gradual infilling since the 1860s has almost removed these first two signs of the brick industry.

This first claypit north of the Craignair Street line was in use until the early 1850s. It may have been run by a member of the McEwan family, who later expanded into a larger area south of the road. McEwan and Shaw started their Munches Brick and Tile Works in the early 1850s, maps showing it to still be there in 1908. However, in 1906 the firm opened the ‘New Tile Works’ further south of Port Street, their works remaining in being until the 1950s. All has now gone, the only sign of the 1850s works being the former manager’s house near the entrance to Port Mill from Port Road. The 1906 works’ claypits are also nearly filled in, but can just be made out from the bypass to Kippford.

Below – 24/09/1836 – Carlisle Journal – To brick and tile burners – A respectable and experienced individual who would engage to make bricks and tiles in the neighbourhood of Dalbeattie will meet with encouragement applying to Mr Maxwell, Munshes, by Castle Douglas.

1848 – 1851 – Dalbeattie Brick and Tile Works – Situation about 25 chains West of Dalbeattie. A brick kiln having a small croft of land where clay is raised and made into bricks and tiles.

15/06/1859 – Dumfries and Galloway Standard – Marriages. On the 3rd instant at Bellvue Cottage, Dalbeattie by the Rev George Dudgeon, minister of Dalbeattie, Mr Thomas Halliday, manager of the tileworks there, to Susan, daughter of the late Mr James Martin of Wigtown.

11/04/1914 – Dumfries and Galloway Standard  – Notice. George Shaw Brick and Tile Manufacturer, Dalbeattie begs to thank his numerous customers for their kind patronage during the last forty years and to inform them that he has now given the Munches Tileworks, for various reasons. 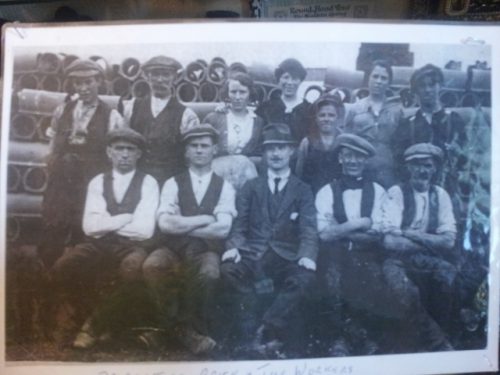 Below  – George Shaw marked Dalbeattie brick and a cored brick also made at Munches and found in many house walls throughout the town. 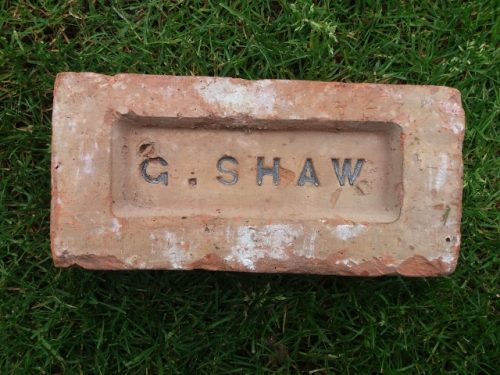 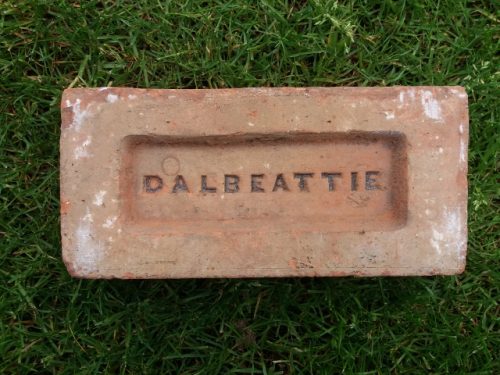 Below – Note the middle row of holes is larger than the top and bottom which is unusual. The holes 1st and 3rd from right middle row may show signs of a lifting tool. 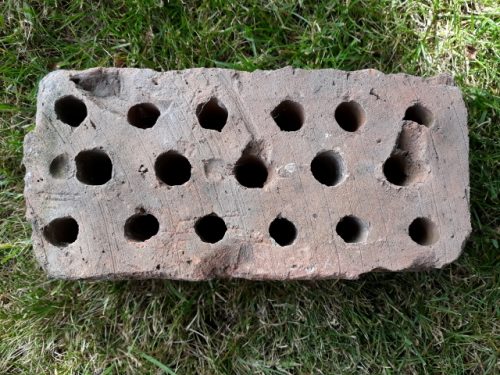 Below -A pantile, kindly donated by Dalbeattie museum and which they believe were manufactured at Munches. 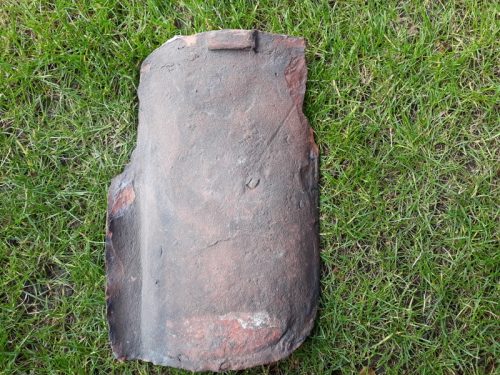 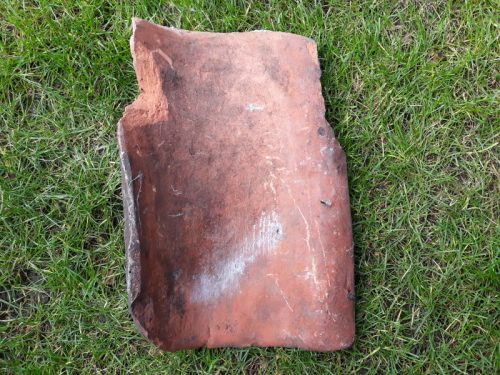