The Brickworks appear to have been constructed after 1820 as a set of plans of this date give no evidence for such a site.

In 1868 John Wilson held a lease for a coalfield and brickworks on the estate. Upon his retirement, in that year a partnership was set up to maintain the colliery which presumably also included the manufacture of bricks and tiles. The partnership originally consisted of James Dougal, James Potter and William Hamilton. Dougal was appointed Managing Director and during his control personalised the partnership to pay an annual rent of £2000 to the owner of the Callendar Estate in order to expand and maintain the brickworks.

In 1899, a company was formed to take over the business and property of the earlier partnership. Ownership of the brick and coal works was passed to the National Coal Board. upon the nationalisation of the mines in 1947. In 1960 the Company ceased the production of tiles and it was intended to end brick production also. However, the works manager, Mr Stewart took over the brick making side. The workforce reduced from 170 to 15 employees and this with other savings enabled the business to survive another 20 years. In 1980 however, the increase in oil prices made the old fashioned kilns expensive to run and the decline in house building forced the works to close in October 1980.

Materials were, for the most part, pit blae obtained from the colliery for the production of building bricks.

However, prior to closure the enterprise was obtaining non-fireclay blae from an open-cast quarry in Dunfermline and manufacturing a more diverse array of products.

At one point the Callendar Brickworks exported considerable quantities to Johannesburg but the export trade was taken over by G R Stein. In 1979 the site delivered mainly to Scotland.

They claimed to have been the first Company in the world to sell a complete ‘baby bricks’ fireplace without having to cut a brick. In other words, each brick was manufactured for a specific place in the fireplace and assembled in situ. However only composition bricks were manufactured after 1979.

Below – Source Falkirk Museum and Archives.

Callendar had 2 works. There was the Callendar Brick and Fireclay Company and another at Glen Village making bricks and drain pipes. The last man to run Callendar, Mr Rule, sold out to Hepworth Ceramic Group when Mr Hendry was young. Hepworth also owns JG Stein now (1979). Between 1930 – 32, a private company – Cannerton Brick Company was set up. This consisted of 4 directors – Mr Anderson, Mr Stewart, Mr Ferguson and the father of Forbes Hendry (George Hendry?). This work was set up as a means of giving employment to the village of Banknock.

The business started as a small brickworks on the south side of Lock No 5 on the Forth to Clyde Canal, alongside the Falkirk Iron Foundry. It is shown on Alexander Black’s survey dated 17/07/1832 but it is not on the map of Parliamentary boundaries also published in 1832 – perhaps because it was surveyed a little earlier. John Anderson managed the works in 1852 and had started a pottery that grew to double the size of the brickworks. 3 old disused clay pits are shown on the map of 1858, which suggests that fireclay was being brought in from elsewhere. James Potter had taken over the Works by 1860 and James Potter & Co had been formed by 1886.

John Wilson held the leases of the Callendar Estate Coalfield until he retired in 1868 when the Callendar Coal Company was formed to carry on the business, with James Dougal as the Managing Director( not to be confused with James Dougall of Bonnybridge). James Potter of Glenfuir House and William Forbes, factor to the Callendar Estate were the other partners. In the 1880s the Falkirk Iron Company wished to expand into the brickworks site so the brickworks was moved to Glen village.

Records exist of the brickworks being supplied with a Bradley and Craven dry mill (no 820) in 1898, and a mixer the following year. By 1912 the Herbertshire Colliery and Brickworks had been taken over by the Callendar Coal Company, who now made a very wide range of fireclay products, including firebricks, chimney cans, grate and stove bricks, electrical ducts, drainage and sewage pipes. When coal was nationalised in 1947 the company continued to trade as the Callendar Brick & Fireclay Company, chiefly making pipes until it was bought by the Hepworth Iron Company in 1967 and closed down. About 170 men and women were employed and bricks were burnt in one 12 chambered Hoffmann kiln and two 12 chambered Belgian kilns.

Callendar Brick & Fireclay Co Ltd was formed in 1947 following the nationalisation of coal, but the company’s origins date back to around 1832 when brickworks were built on the south side of Lock 5 of the Forth & Clyde Canal. These works were taken over by James Potter of Glenfuir by 1860 and James Potter & Co was established by 1886. James Potter was also a partner in the Callendar Coal Co from 1868, along with William Forbes and James Dougal. Callendar Coal Co leased the mineral rights of Callendar Estate. The brick and fireclay works were moved to Glen Village in the 1880s and thereafter were part of the Callendar Coal Co. When coal was nationalised in 1947, the brickworks were separated off into a private company, the Callendar Brick & Fireclay Co Ltd. In 1967 the company was bought by Hepworth Iron Co and the works closed down (believed to have closed sometime after 1978 – skeleton staff in later years).

29/02/1808 – Caledonian Mercury – An early reference to fire clay at Callendar. The unexpired term of the lease of Callendar Colliery held under William Forbes of Callendar for 19 years from Martinmas 1804 to be sold or sublet … There is immediately above one of the coal seams a stratum of excellent fire clay about 2 feet thick which could be turned to good account, fire bricks being much wanted in the neighbourhood.

17/07/1832 – Callendar Pottery, Brick and Tile Works are detailed in Alexander Black’s survey of this time. 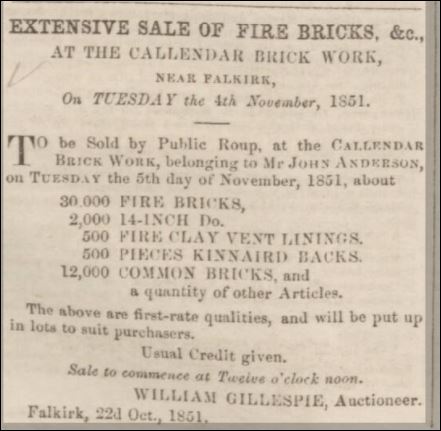 1852 – John Anderson manages the works. He started a pottery that grew to double the size of the brickworks.

1858 – 1861 – ScotlandsPlaces – A brick and tile works with a kiln and drying shed attached. It had for some years back fallen into disuse but has recently been re-opened for work. Property of Mr Potter. 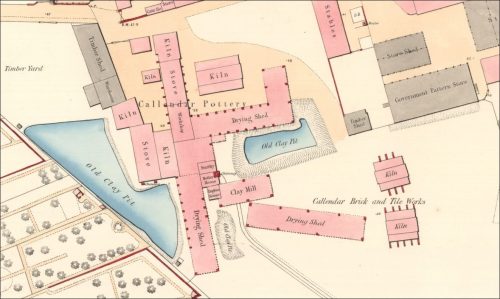 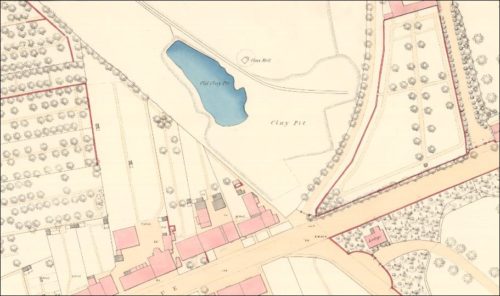 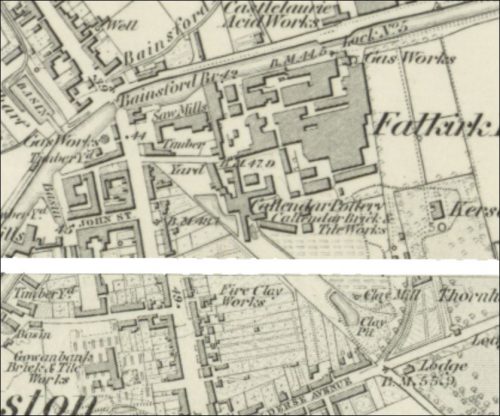 1886 – The Callendar brickworks were situated at 110 High Street, Falkirk and  James Dougal was the manager.

1886 – James Potter and Co is formed to continue running the works.

c. 1880 – 1890 – The Callendar Brick and Tile Works are moved from Grahamston, Falkirk to Glen Village just south of Falkirk. – link