21/01/1888 – Fife Free Press – For sale, a quantity of first-class house tiles on hand; can be sent by water or rail. James Potter, Firs Brick and Tile Works and Pottery, Grahamston, Falkirk.

Below – 01/04/1893 – Falkirk Herald –  The trade in bricks is in general very brisk, a large number of buildings now going on and about Falkirk taxing the energies of the producer to the utmost. But competition in this class of work has made prices low, even notwithstanding the increased demand. The principal works now going on which supply orders in this line are the tenements at Parkfoot (Mr Marshall’s), at Woodlands, those of the Building Society in Watson Street, and those Stenhousemuir. As an illustration of the output of bricks and the consumpt, it may be mentioned that an ordinary brick cottage of two rooms and kitchen, with outhouses, may account for some 40,000 bricks. This is just about the ordinary quantity produced by two brickworks—Callendar and Firs—every day. And again, as showing the speed of erection, the order for, say, a building embracing double cottage and attics, so far as bricks were concerned, was given in the middle of this month, and the building, finished, roofed, plastered, and painted, will be occupied Whitsunday term. Wages in this variety of production, the bricks themselves are all made by machinery, run from a pound to 22s per week in the highest paid work in the neighbourhood. In Denny District, a good deal of brickwork is also being done in connection with extensions to paper mills as well as for private work, but Bonnybridge and Banton Brickworks supply the bulk of what is needed there.

13/01/1894 – Falkirk Herald – Charles Scobie, engineman, Firs Brickwork, Falkirk, was charged with having on the 10th inst. broken into the railway goods shed forming part the premises at Springfield, Falkirk, occupied by the Caledonian Railway Company with intent to steal. The accused pleaded guilty and was sentenced to 21 days’ imprisonment.

28/02/1894 – Falkirk Herald – Reference to lodging without permission at Firs Brickworks and The Callendar Coal Company being owners at this time.

11/08/1894 – Falkirk Herald – Peter Mc’Cafferty, engineman, was charged with stealing a clock from the engine-house at Firs Brickwork. Accused, who had been previously convicted of theft, pleaded guilty and was sent to prison for forty days.

24/11/1894 – Falkirk Herald – Salton Ironworks, Falkirk – These works, which are being erected by Mr J E Gibson, late of the Camelon Iron Company Limited, and which are now approaching completion, were commenced in July last and but for some delay in the supply of bricks, occasioned by the coal strike, they would probably have been ready for starting by this time … It may also be mentioned that the whole of the bricks and tiles used in the erection of the buildings were manufactured by the Callendar Coal Company, Falkirk at the Firs Brick Works belonging to that company, which immediately adjoins the new foundry. 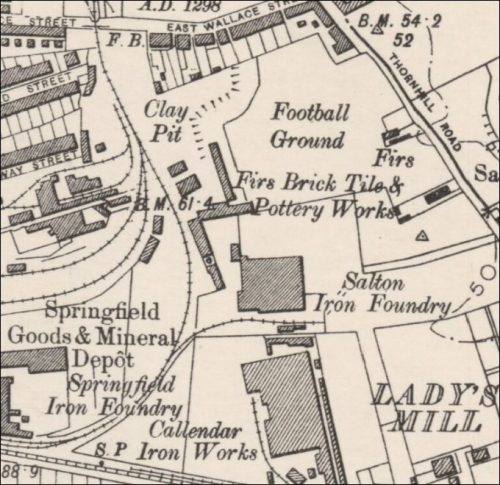 02/09/1896 – Falkirk Herald – Unlawful lodging at Firs Brickwork. Reference to the Callendar Coal Company being the owner. (Contravention of the Trespass Act).

29/12/1897 – Falkirk Herald – Archibald Daisley, son of Thomas Daisley, labourer; Peter Craig, son of Alex. Craig, labourer; and Joseph Docherty, son of Margaret Ferguson or Docherty, widow, all residing in Main Street, Bainsford, were charged with having, on 27th Dec, stolen 1 cwt. of old iron from the Firs Brickwork, occupied by the Callendar Company. The Fiscal explained that Daisley and Craig had been previously convicted of stealing, and Docherty came before the Court for the first time. The two first-named boys went to the Firs Brickwork and lifted a cwt. of coal, and when on their way to one of the ragstores they were intercepted by the police. The mother of Craig, who was present Court, said ber boy was entirely beyond her control. Acting on that statement the Magistrate sentenced him to three years in the reformatory. The mother of Daisley pleaded that her boy should not be sent to a reformatory, and the Magistrate sentenced him to receive seven stripes with the birch rod. Docherty was fined 2s 6d, or twenty-four hours imprisonment.

16/03/1898 – Falkirk Herald – Theft of old iron. Sarah Lowrie or Wilson was charged with having stolen 84 lbs. of old iron from the Firs Brickworks, occupied by the Callendar Coal Company. Accused, who had been previously convicted, pleaded guilty, saying that she thought the metal was of no use. Sentence of fourteen days’ imprisonment was passed.

23/04/1898 – Falkirk Herald – The making of James Street …  Specification for macadamising, &c, of the street extending from Thornhill Road westwards to Firs Brickworks was read and recommended to be approved of by the Commissioners …

04/06/1898 – Falkirk Herald – Callendar Coal Company are granted permission for the erection of a small pony stable at the Firs Brickworks.

21/01/1899 – Falkirk Herald – The past year has also been a most prosperous one so far this industry concerned. In connection with the Callendar Colliery, a large brickwork is carried on, producing all classes of brick and fire-clay goods for the building and foundry trades. The demand for firebricks during the past yew has been very great, the company finding themselves quite unable to cope with local orders. The healthy state of their trade has induced the firm to lay down a substantial new plant for brick-making purposes. They have also erected some new drying stoves and kilns for sanitary pipes, and a large Hoffman kiln for the burning of the increased manufacture of bricks made by their new plant. The company have also carried on a brickwork erected by the late Mr Potter — Firs Brick and Tile Works, Grahamston — where the manufacture of roof tiles, drain tiles, and common bricks was carried on. Those works, however, were erected on the ground of the North British Railway Company, and in their extensions, at Grahamston the work has stopped, the ground being required for extra sidings. To continue this branch manufacture, the firm, however, intend during the ensuing season to put up a large and extensive new plant in the neighbourhood of Denny.

06/05/1899 – Airdrie and Coatbridge Advertiser – Drowning accident – On Wednesday afternoon, whilst Alexander Shepherd, a lad of 17 years of age, and residing in Grahamston. Falkirk was amusing himself by sailing about on a raft of old wood on the pool in an old clay pit at Firs, Falkirk, formerly used by the Firs Brickworks, he fell into the water, which is about ten feet deep. Two of his companions who were standing near gave the alarm, and the police were communicated with. A search was made for the body with grappling irons but without success. A young man then dived and brought the body to the surface.

19/10/1901 – Falkirk Herald – The Firs clay hole. During the past fortnight the railway company have been working steadily towards the removal of the nuisance at the Firs clay hole. A week past on Monday pumping operations were begun, and have been continued night and day since, while the place has been opened as a free coup for clean rubbish. The water in the hole is being slowly but surely drawn off, and with the steady filling of the hole great change is noticeable on the place.

09/04/1904 – Falkirk Herald – The petition of J. H. A Towers, Firs Brickworks, Grahamston, to erect a chimney stalk 100 feet high and to take down the present one at Grahamston Fire Brickworks was granted.