This product is in the possession of Ian Suddaby.

Ian states – “Gustav Bischof was Professor of Technical Chemistry at the Andersonian University in Glasgow and in 1863 he invented and patented the process of filtering water through spongy iron and sand to purify it. It won a number of international medals from 1872 on. A range of vessels were produced to facilitate this water purification in the home.
This one is an example of a No. 2 size and what looks like G.28 is stamped near the top of the exterior. I’ll measure the capacity at some point but as it’s lost the internal fittings, that won’t be accurate. It’s also lost the lid and the fittings (taps) for the holes at the bottom. Still, a nice thing to have though. It’s just over 2′ tall and just over 6″ internal diameter.
The maker was Murray & Co of Glasgow. In 1870 they moved from Glasgow to Rutherglen and although Rutherglen marks do exist I’d doubt that this item predates 1870 as one or more of the medals look to be depicted around the base”

Caledonian Pottery. The “Caledonian Pottery” at Rutherglen, near Glasgow, was established at Glasgow about 1780 by a joint-stock company, and from the company was acquired, about 1825, by the grandfather and father of the present head of the firm of Murray and Co., by whom the manufactory is carried on. In 1870 the works were removed from Glasgow to Rutherglen, about a couple of miles from that city. At first, fine porcelain and china were made, then cream-coloured printed ware, with Rockingham and salt-glazed wares. In 1851 the demand sprang up for stoneware ale and other bottles, and this has become one of the staple trades of Glasgow and the surrounding district. The goods now produced are the usual classes of ” Bristol ” glazed stoneware, salt-glazed stoneware, cane ware, and Rockingham and Egyptian black wares. In these classes of goods, all the usual domestic articles are very extensively made, both for the home and continental markets. The quality produced is much above the average in excellence, and the goods of this firm are in much repute. A speciality of Messrs. Murray and Co. is their patent ” spongy iron filter ” which has been officially recommended by the Royal Commission and has been awarded a medal. It is one of the most perfect and useful of filters, and its principle of construction is thoroughly good. The mark used by Murray and Co. is a lion rampant. 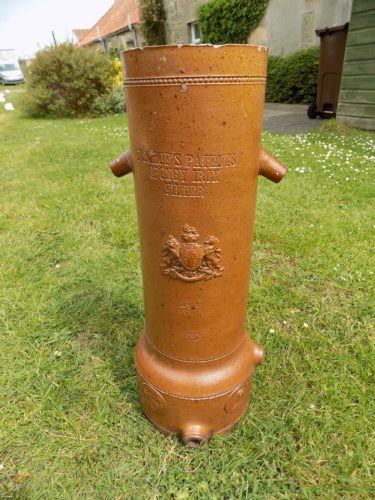 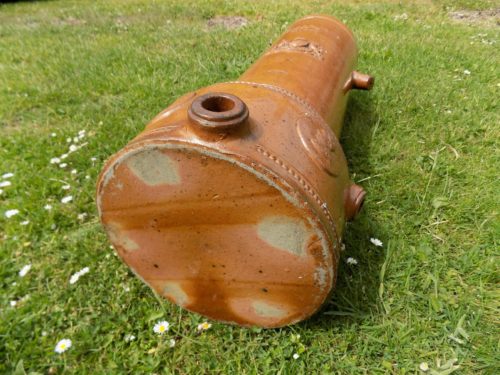 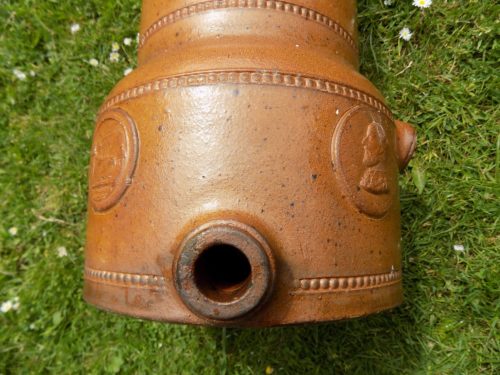 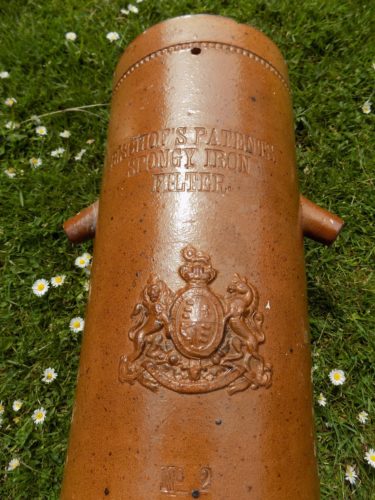 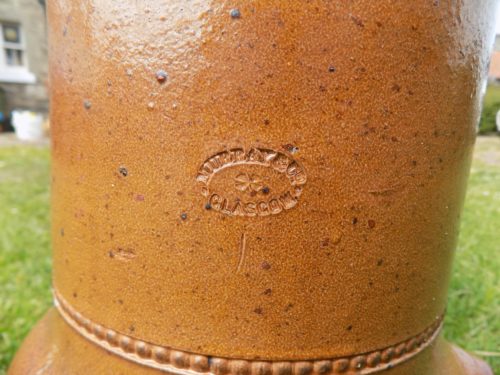 Below – A diagram showing the internal workings of the filter. 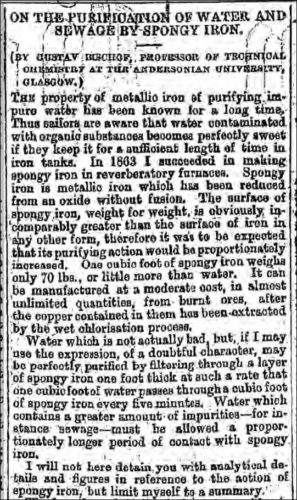 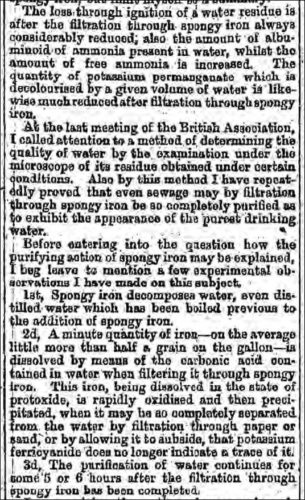 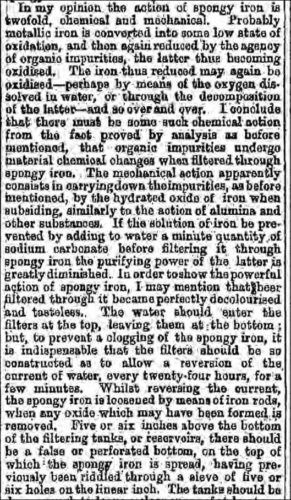 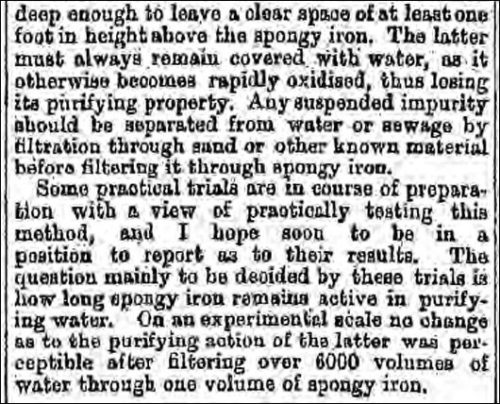 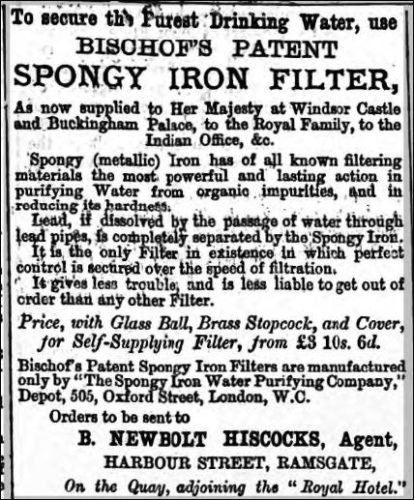 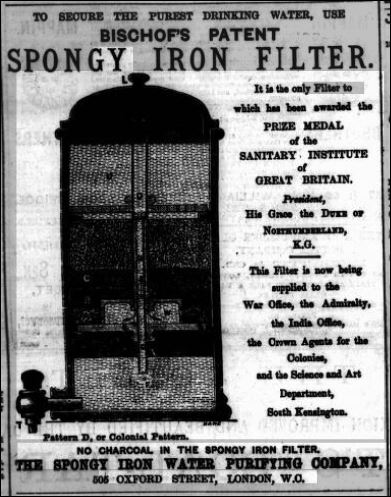 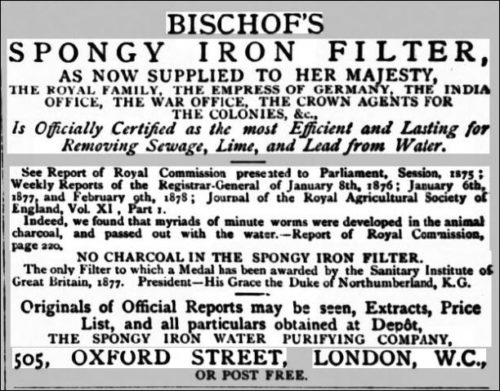 Below – 01/08/1881 – The Globe – The advert below does not mention Bischof directly and infers that there are now many spongy iron filters on the market.

31/03/1883 – Fife Free Press – … Professor Bischof, formerly of Glasgow, has introduced another form of iron as a filtering medium. It is called spongy iron and is made from burnt ores which are the residues of Spanish and other pyrites after their sulphur and copper are extracted. It is even more effectual than the protocarbide, and perhaps than even charcoal. The Registrar-General’s report of January 1877 mentions the result of an analysis of water filtered by means of spongy iron, showing that nearly nine-tenths of the organic matter and more than one half of the hardness was removed … 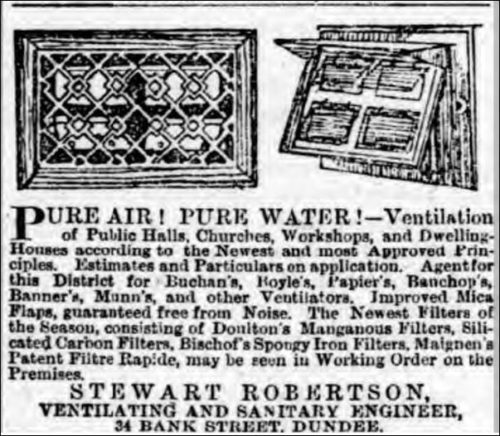 1894 – Spon’s household manual – a treasury of domestic receipts and guide for management – … Iron – From experiments made by allowing water to filter through spongy iron on to meat, it has been found that after 6 weeks the meat remained fresh. Another test was made by preparing a hay infusion, which was kept until it showed an abundance of organic life. The infusion was filtered through spongy iron with layers of pyrolusite, sand, and gravel, and then was kept in contact with meat for many weeks. The meat showed no signs of putrescence. In some of the experiments filtered air was supplied, which proves conclusively that bacteria or their germs are not revived when supplied with oxygen after the filtration; this is a result of importance, as it demonstrates that by filtration through spongy iron, putrefaction of organic matter is not only suspended for a time but that it ceases entirely until reinstated by some putrefactive agent foreign to the water. The peculiar action of spongy iron is believed to be thus explained. If a rod be inserted into a body of spongy iron which has been in contact with water for some time, gas bubbles are seen to escape. These are found to contain carbon and hydrogen, and experiments lead to the conclusion that the carbon is due to the decomposition of organic matter. The material was introduced for filtration purposes some years ago by Prof. Bischof. His ordinary portable domestic filter consists of an inner, or spongy iron, vessel, resting in an outer case. The latter holds the “prepared sand,” the regulator arrangement, and the receptacle for filtered water. The unfiltered water is, in this form of filter, mostly supplied from a bottle, which is inverted into the upper part of the inner vessel. After passing through the body of spongy iron, the water ascends through an overflow pipe. The object of this is to keep the spongy iron, when once wet, constantly underwater, as otherwise, if alternately exposed to air and water, it is too rapidly oxidised. On leaving the inner vessel, the water contains a minute trace of iron in solution, as carbonate or ferrous hydrate, which is separated by the prepared sand underneath. This consists generally of 3 layers, namely, commencing from the top, of pyrolusite (manganese black oxide), sand, and gravel. The former oxidises the protocompounds of iron, rendering them insoluble when they are mechanically retained by the sand underneath. Pyrolusite also has an oxidising action upon ammonia, converting it more or less into nitric acid. The regulator arrangement is underneath the perforated bottom, on which the prepared sand rests. It consists of a tin tube, open at the inner, and closed by screw caps at its outer end. The tube is cemented water-tight into the outer case, and a solid partition under the perforated bottom referred to. It is provided with a perforation in its side, which forms the only communication between the upper part of the filter and the receptacle for filtered water. The flow of water is thus controlled by the size of such perforation. Should the perforation become choked, a wire brush may be introduced, after removing the screw cap, and the tube cleaned. Thus, although the user has no access to the perforation allowing of his tampering with it, he has free access for cleaning. Another advantage of the regulator arrangement is that, when first starting a filter, the materials may be rapidly washed without soiling the receptacle for filtered water. This is done by unscrewing the screw cap when the water passes out through the outer opening of the tube, and not through the lateral perforation. Various modifications had, of course, to be introduced into the construction of spongy iron filters, to suit a variety of requirements. Thus, when filters are supplied by a ball-cock from a constant supply, or from a cistern of sufficient capacity, the inner vessel is dispensed with, as the ball-cock secures the spongy iron remaining covered with water. This renders filters simpler and cheaper. As the action of spongy iron is dependent upon its remaining covered with water, whilst the materials which are employed in perhaps all other filters lose their purifying action very soon unless they are run dry from time to time, so as to expose them to the air, the former is peculiarly suited for cistern filters … 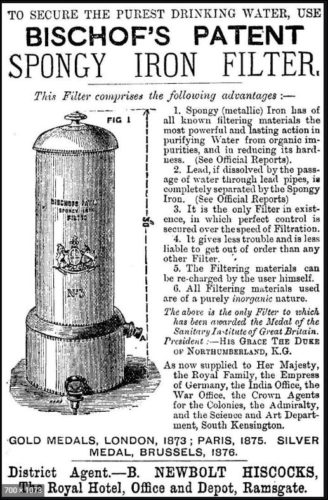 Below – The coat of arms of the spongy iron filter appears to be the Great Britain coat of arms as per the illustration below. 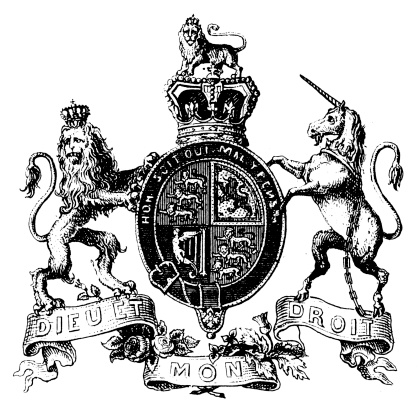