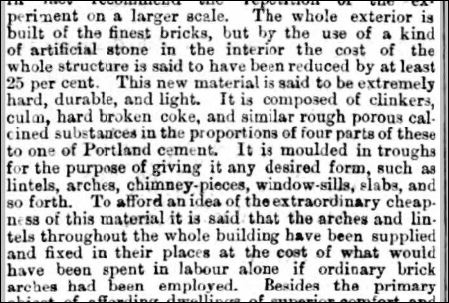 Below – 19/06/1901 –  Aberdeen Press and Journal – Clinker and cement used to manufacture slabs and bricks in Aberdeen. 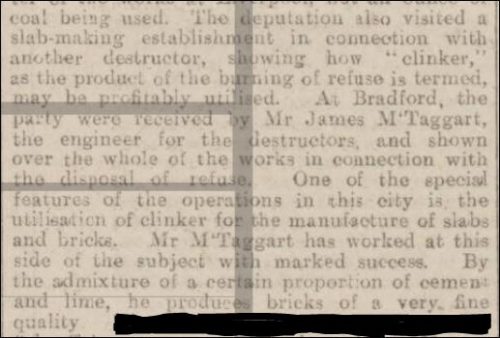 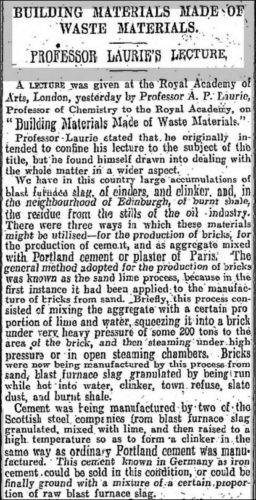 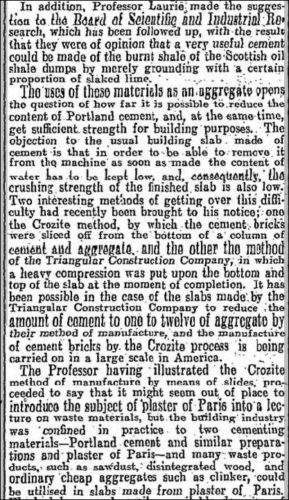 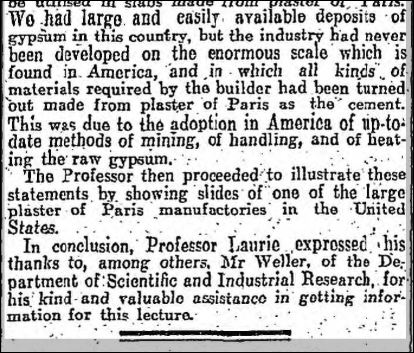 31/12/1924 – The Scotsman – The possibilities of brick manufacture from gas work clinker are being explored by Edinburgh Corporation. Mr H. Gracie, the city gas engineer and manager, has prepared reports on the question, which are being considered by a sub-Committee of the Town Council. Mr Gracie estimates that the total capital cost of a suitable brick-making plant with a capacity of 2000 to 2500 bricks per hour (ready for work) would bo approximately £11, 000. The interest and depreciation charges upon this sum at 5 per cent interest and 10 per cent depreciation would be £1650. The quantity of clinker available, he states, is approximately 10, 000 tons per annum, but this may be reduced when the vertical plant is put to work as less fuel is required. The plant makers estimate that the gas department has sufficient clinker to produce 3,000,000 bricks per annum. Taken on this basis the capital charges per 1000 bricks made amount to 11s. The plant submitted, working two shifts per day of 8 hours each could produce if they had the material available, approximately 10,000,000 bricks per annum, in which case capital charges would be reduced correspondingly. Mr Gracie estimates that the total cost per thousand bricks made, inclusive of interest, sinking fund, &c, would be 40s 11d and that this quality of bricks would not command a higher price than 45s per thousand so that the estimated profit of 5s appears to be fairly accurate. On their total production of three million, this represents £750, to which has to be added saving in rolling stock transport, tipping, at least £350, a total of £1100 per annum. There is a further prospect of reducing to a minimum the necessity of tipping refuse on the foreshore. The makers of the plant consider the manufacture of bricks from clinker should prove a remunerative proposition. They suggest that the bricks might be used for foundations and internal walling, but when the finish is to be roughcast they can also be used externally.

Below – 06/01/1925 –  The Scotsman – Corolite houses for Edinburgh – A Korrelbeton experiment involving 52 houses at Lochend.

Below – 27/02/1926 – The Scotsman – Article regarding industrial waste being deposited on the shore at Granton. Clinker bricks.

Below – 02/03/1926 – The Scotsman – Letter from a member of the public regarding the proposal of the removal of sand from Cramond Beach to make gas clinker bricks. 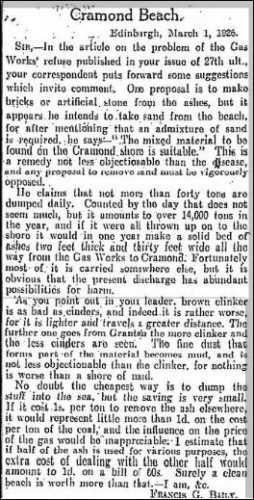 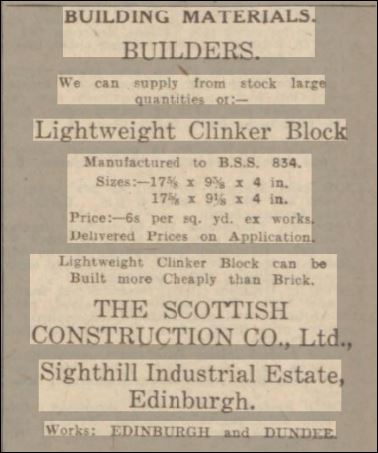