24/05/1862 – Renfrewshire Independent – A report on the engine house at the premises of Messrs J and W Lyon, brick and tile manufacturers, Mountainblue, Camlachie being entered by thieves and 45 feet of gutta-percha belting and a large quantity of joiners tools being stolen. 3 men were apprehended including Thomas Blackly who had previously been employed at the brickworks, McLachlan aka ‘The Rat’ and Graham.

02/10/1876 – Glasgow Herald – To let, building of 2 flats about 60 x 20 situated within a 5 min walk of 2 railway stations between Great Eastern and London Roads with or without steam power. Apply Wm Lyon, Mountainblue Brickworks.

Below – 04/05/1877 – Glasgow Herald – The pottery and brickwork belonging to William Lyon and situated at Mountainblue, Camlachie is for sale. 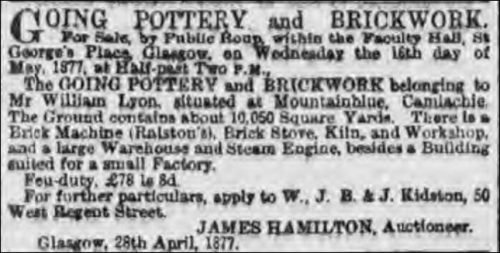