The works never became profitable and she eventually sold them to marry and emigrated to Australia. The site was later taken over by George Turnbull & Co.

The works stood on a Millstone Grit bed of clay and had their own mine just to the south of the works. When owned by George Turnbull, together with the Bonnymuir Tileworks they produced blast furnace linings, gas works blocks, grate back bricks, fire bricks, furnace blocks, cupola’s, ladles, boiler seat blocks, flue covers and ground ganister – Castings Magazine 1923 advert.

1912 – Robert Dougall dies shortly after Dykehead Brickworks had been started. 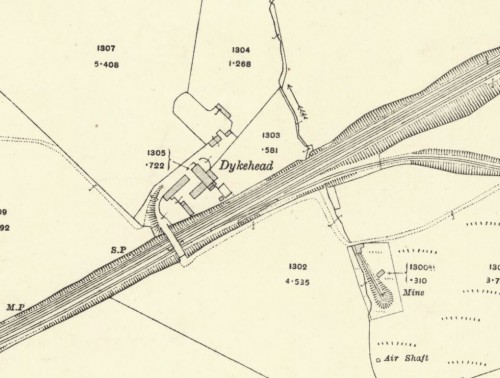 1922 – 1923 – Directors describe trade as very poor and the maximum production at Dykehead Works was 50,000 bricks per month due to restrictions in the railway sidings.

1927 – 1928 – Business was still poor and the lease was up for renewal. Profits were down and directors took a pay cut. Zetland Estates who owned the land and mineral rights
agreed on a new lease after a new 16 chambered kiln was erected. The Dykehead Ganister and Fireclay Company was liquidated and all assets were transferred to a new George Turnbull & Co Ltd. 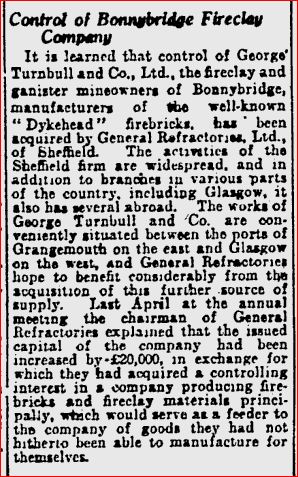 22/10/1947 – Falkirk Herald – – Young labourer suffocated. A fatal accident occurred on Monday forenoon at the Dykehead Works. Bonnybridge, of the Union Fireclay Company, Ltd. Michael Traynor (15), labourer, who resided at 3 Bonnyside Road, Bonnybridge accidentally fell into a hopper containing milled clay. He was completely buried, and when taken out was found to be dead, death being due to suffocation.

06/12/1947 – Falkirk Herald – A second brickworks which caused the death of Michael Traynor, 15 years of age, who resided at 3 Sunnybrae, Bonnybridge was inquired into. Traynor was employed as a brickworker at Dykehead Brickworks, Bonnybridge, on 20th October, when he fell into a hopper containing powder milled clay and was asphyxiated. A German prisoner-of-war, who was employed at the brickworks belonging to the Glenboig Union Fireclay Company, Ltd., said Traynor was working on a platform above one of the hoppers. It was Traynor’s duty to facilitate the free movement of the clay by using a long pole and a shovel. As powdered clay was not running freely from a hopper, the witness opened the shutter at the bottom, put in his hand and touched a boot. He immediately gave the alarm, and the boy’s body was found buried in the clay. Further evidence was to the effect that no one saw what had actually happened. The last time the boy was seen he was on the platform at the top of the hopper. The lad might have slipped off the platform or from the ladder inside the hopper. When the alarm was raised, eight to nine tons of clay was taken from the hopper. This took half an hour. The boy, who was found in a crouching position was dead. A verdict in accordance with the evidence was given.

2019 – These gate pillars stand at the entrance to the Dykehead Fireclay Works. They are constructed from Dykehead bricks. The photograph is taken inside the works looking out (exit!) To the left are the trees on the overgrown Steins Milnquarter Brickworks 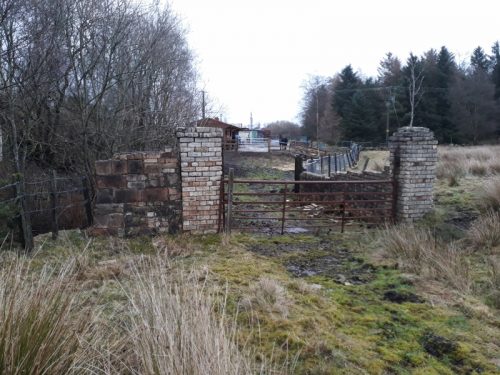 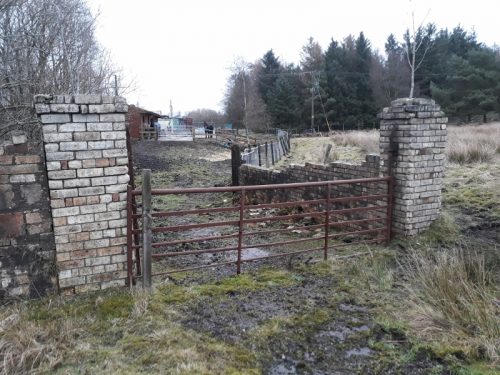 GR-Stein Refractories Ltd – Formed by a merger in 1970 of John G Stein & Co and General Refractories of Sheffield. GR-Stein became a subsidiary of Hepworth Ceramic Holdings Ltd General Refractories was formed in 1929. It acquired the Glenboig Union Fireclay Co in 1936, (along with other companies), which became its Scottish holding company, and Dykehead Gannister & Fireclay Co of Bonnybridge, George Turnbull & Co of Bonnybridge and Castlecary Brick & Fireclay Co, all in 1936. (see Glasgow Herald below which infers this date is 1934) GR Stein’s Manuel Brickworks in Whitecross opened in 1928 and closed on 28 December 2001 when manufacture moved to England and Poland. Source Falkirk Museum and Archives.